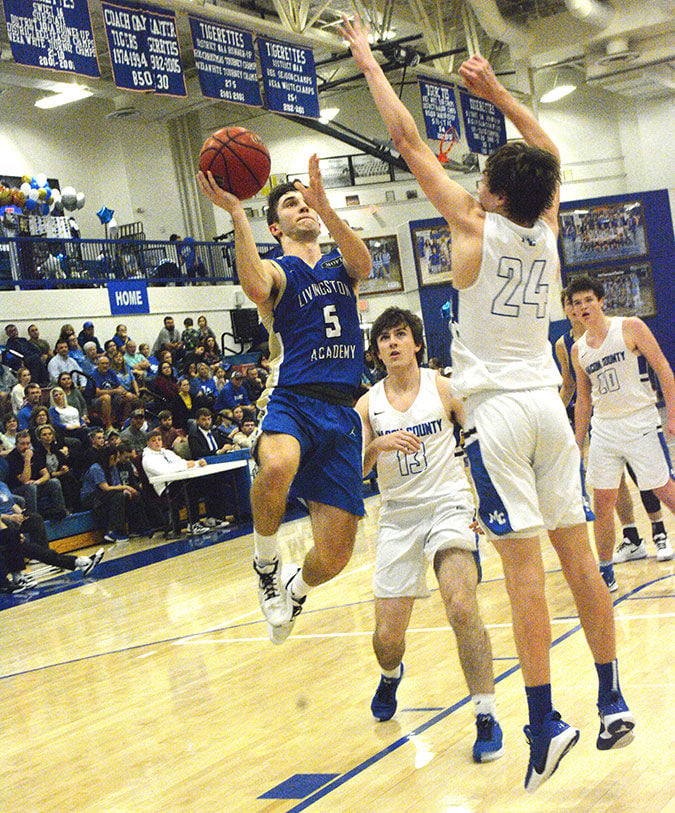 Aubrey Hollars leaves the floor and gets 2 of his 8 points against Macon County. 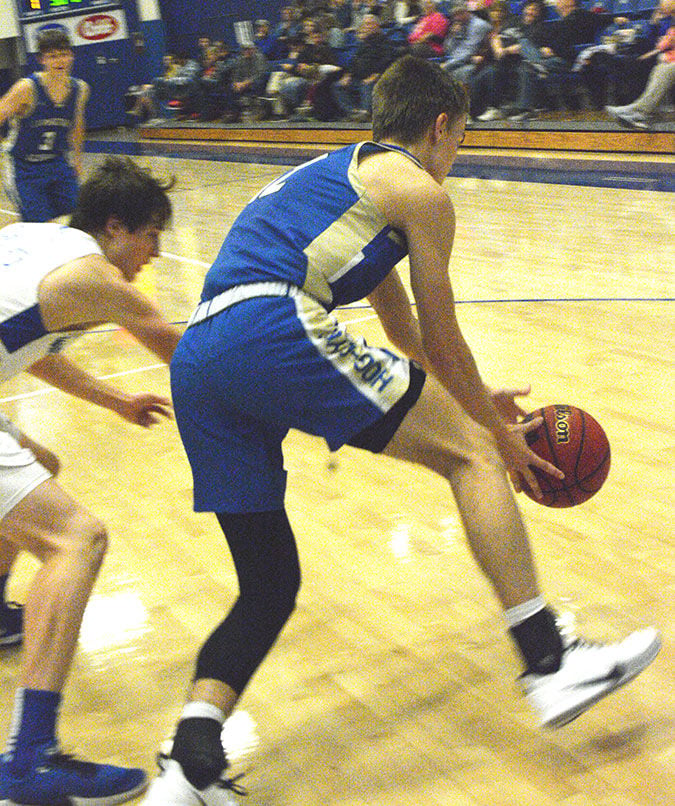 Aubrey Hollars leaves the floor and gets 2 of his 8 points against Macon County.

Since Watertown joined District 8, 2A three years ago, the Purple Tigers and the Livingston Academy Wildcats have faced each other six times in regular season play and twice in tournament action. In the regular season encounters, the margin of victory has been 3, 4, 3, 3 points in regulation time. In tournament action, each time was 1 once, usually in convincing fashion.

But this year, the Wildcats and the Purple Tigers are about as even as any two teams in the district. In the season’s first encounter in Livingston in mid-January, the Wildcats came away with a 74-71 overtime win, and last Friday night in Watertown, it took two overtime periods before it was settled.

“Those are two pretty even teams,” LA head coach Jimmy Miller pointed out. “It was a very good game with both teams really playing hard. Those kind are fun.”

After battling to a 54-54 regulation tie, the duo played to a 62-62 deadlock in the first overtime, then it took a few breaks, a fired up basket from Nick Choate after a beautiful feed from Aubrey Hollars and some down the line pressure free throws to seal a 69-66 win.

“I don’t remember playing them (Watertown) when it wasn’t a super game,” Miller added. “Every time we play, it gets down like this. Our players never thought for one minute it wouldn’t turn out like this, and they get a lot of credit. That play in the second overtime really said a lot about this team. Never quit.”

With the regular season drawing to a close, the Cats needed all the wins they could get, and on Tuesday night, they traveled to another tough spot, Macon County, and came away with a convincing 62-45 win, leaving them with a 6-6 district record with two very tough games this week, York and Cannon County. LA has lost to both so far this year.

When the Cats reached Macon County on Tuesday, the main conversation was when Livingston won at home, the Tigers were without two of their best players. Well, they had both back this time and the outcome was the same – a Livingston victory, but in all fairness, this win was a little tougher.

“This was a very big win for us,” Miller told his team after the victory. “Will (McDonald), you had a great night, and all of you stayed focused all night. You played hard physically and mentally, you were on top of the game.”

McDonald’s play on Tuesday was in contrast to some of his recent games where points just wouldn’t come his way. Several nights, the senior did not score, and his scoring is vital to the success of the team.

“I really can’t explain it,” McDonald would say. “Some nights you do and some nights I don’t. Matthew (Sells) is a natural shooter, and you expect him to make most of his shots. Me, I have to work at it, and sometimes it works and sometimes it doesn’t. It’s not that you don’t try, it’s just that it doesn’t always work.”

At Macon County, for McDonald, it worked. He had 12 critical points, three rebounds, and two assists. The key to his points were they came at times when the Cats just needed a spark.

Macon got off to a quick start, raced out to a 15-6 lead, then held off charges from McDonald, Sells, and Choate, and Hollars’ layup at the buzzer to hold a 17-13 lead. But the Cats were coming.

Two quick baskets by McDonald pulled the Cats to within one, 17-18, then Sells hit a three-pointer at the 5:07 mark, and for the remainder of the quarter, it was back and forth, with LA leading 27-26 at intermission.

A strong third period finally put LA in firm control, then it was a matter of the spread. Three-pointers in the final quarter by Eli Melton and Sells sealed the result.

Watertown took a 16-7 early lead and was on top 28-24 at the half. In the first half, Sells had only 4 points, but his 28 in the second half would prove decisive. A basket midway through the third frame by Hollars would put LA on top for the first time of the night, then it was back and forth.

A pair of free throws by Watertown, with 27 seconds remaining, forced the first overtime, and a late field goal by the home team forced the second at 62 all. In the second overtime, LA got out front on an old fashioned three-pointer by Choate, 68-64, a field goal and a free throw then held on for the win.

Again it was Sells leading the way with 32 points this time and 6 rebounds. Choate had 12 points and 5 rebounds, Melton 8 points and 2 rebounds, and Carwile and Simmons, with 5 points each. Carwile had 6 rebounds. Hollars added 4 and McDonald finished with 3 and 4 rebounds.

LA will finish the regular season this week starting at home tonight, Tuesday, Feb. 11 with York for Senior Night. On Thursday, the team will travel to Cannon County for the final regular season game.