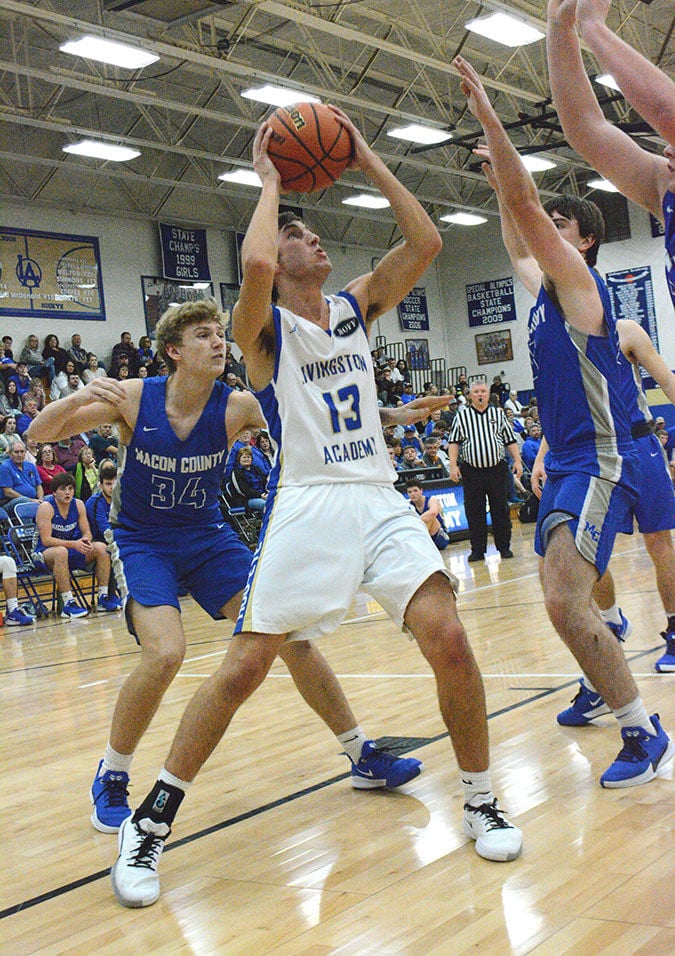 Will McDonald takes a shot from close in against Macon County. 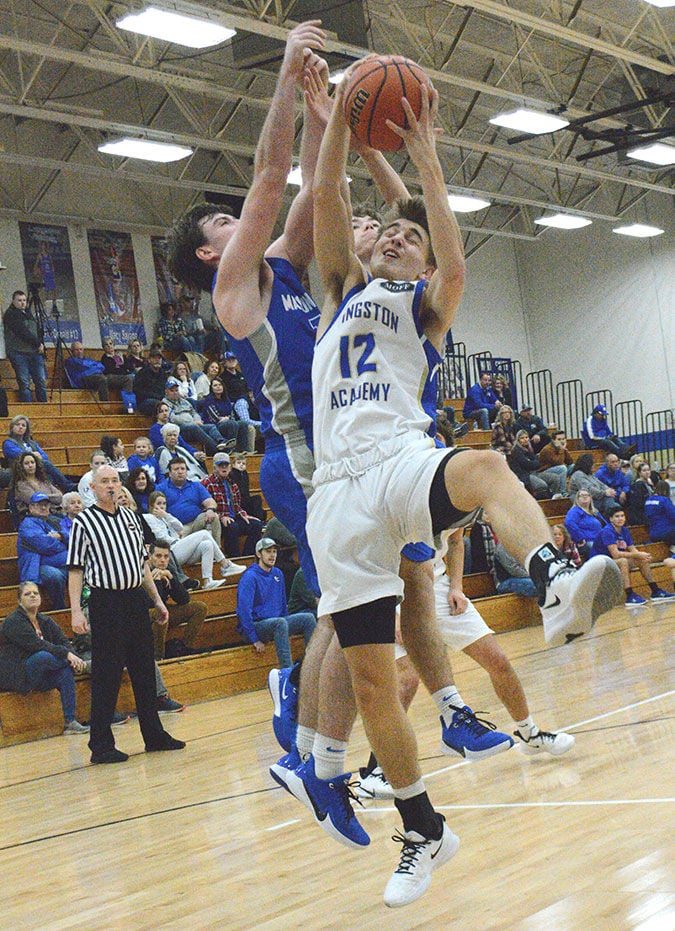 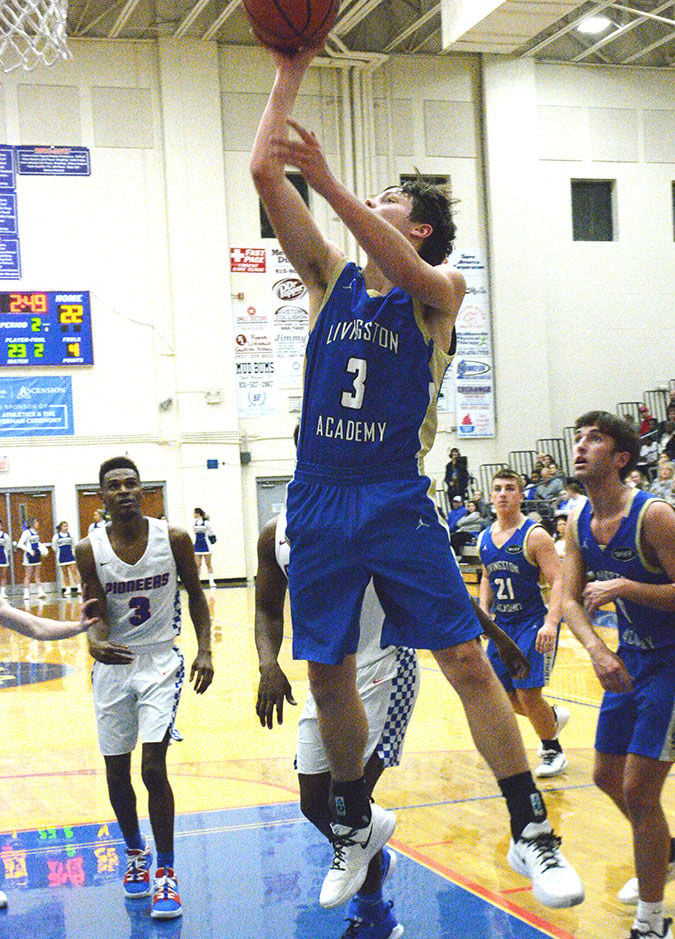 Will McDonald takes a shot from close in against Macon County.

Since graduation last spring, the Livingston Academy boys basketball coaching staff has been looking for someone who could fill the shoes of then senior Cody Ray. Ray’s sharp shooting and outstanding rebounding were key reasons the Wildcats went 23-10 last season with a trip to the semifinals of the regional tournament.

He also was a big reason Matthew Sells had a great season. Only a sophomore last year, Sells, with a lot of pressure diverted away from him by the presence of Ray, ripped off over 700 points and was the talk of District 8 AA.

With Ray gone, Sells is still the driving force he has been for the past two seasons, but there have been times when his ole buddy Ray would have come in handy.

Well, he did Friday night, not on the court per say, but in the stands watching Sells and the Wildcats roll over Macon County 68-33 and posting their 9th win of the season in 19 starts.

“I really enjoyed that, “ Ray would say after the game, “boy, (Nick) Choate really came alive. Brought back some fond memories.”

It also put a big smile on Sells’ face after the game in the locker room.

“That was big,” Sells would calmly explain after he and Choate each scored 21 points in the win. “He really took a lot of pressure off me since Macon had to go after him as much as they went after me. Made it a lot easier.”

Choate, a sophomore and the tallest player on the team, has been wanting to get in on the action for two seasons but has been plagued with injuries. Shortly after Christmas, he’s slowly worked his way onto the floor and has been improving each game.

Friday night he was not only a player, he became a factor.

“We’ve needed that spark all season and tonight Nick really gave it to us,” LA assistant coach Nate Kennard was quick to point out. “He’s catching on to the game more and more each time we play, like Matthew (Sells) had to do, and that’s allowing him to build confidence, and with that, he’s adapted to the speed of the game and now is part of it.”

For his part, Choate said he’s just excited to finally get to play. “I’ve been hurt for a season and a half and now I’m starting and having fun,” he said. “Hopefully I can take some pressure off all of the others and allow them to move more freely and make more shots. Tonight I adjusted more to the speed of the game, and that will go a long way to adjusting to how I play.”

Friday’s encounter with Macon was an up and down night. When the Wildcats were “up” the Tigers couldn’t do anything with them, and when they were “down”, bad passes, poor shooting decisions, and in general, sloppy play, allowed the visitors to hang close until at least the intermission.

Livingston raced out to a quick 20-5 first quarter lead, then went on “dull speed” where they did as much wrong as they had done right in the first quarter and allowed Macon to pull within 11, 25-14. At that point, Will McDonald hit a pair of his patented 12-foot shots inside, and Aubrey Hollars nailed a three-pointer to give the Cats a 30-19 halftime lead.

It was in the third frame, where the LA defense held Macon to a mere 7 points that the game exploded. In the quarter, Choate dominated the boards with seven of his game high 13 rebounds and scored 10 of his 21 points. It was also a good quarter for Hollars, who added a field goal and a free throw, and Sells as well, who matched Choate with 10 points.

“I don’t really know what we didn’t do there in the second quarter,” McDonald added after the game, “but we put it all back together and did pretty good in the second half. Nick (Choate) really made a big difference tonight, and we’ve needed that all season. Hopefully, he can keep it up.”

Sells and Choate each scored 21 points. Choate added 13 rebounds, giving Livingston its second only double-double of the season. Sells did it early in the season against Clarkrange, scoring 25 and pulling in 11 rebounds. McDonald added 8 points and 3 rebounds, Hollars and Eli Melton both scored 6 with Hollars pulling down 8 rebounds and credited with 3 assists. Nate Carwile had 2 points and 3 assists while Easton Goodpasture and Ayden Coffee each scored 2 points.

Earlier in the week, Livingston traveled to McMinnville to take on 3AAA Warren County and in a very exciting game came off with a 62-58 win.

From the first tip-off, the game stayed close with LA leading 16-14 at the end of the first quarter and 28-26 at the half. The Wildcats did have a good third quarter where they pulled away by 10, 52-42, but had to hang on down the stretch with some critical free throws by Sells to pull out the win.

Sells led the scoring with 35 points while Melton drove in 8. Choate and McDonald each had 6, Hollars 5, and Carwile 2.

The Wildcats will be at home tonight, Tuesday, Jan. 14 hosting Watertown then will travel to Jamestown on Friday to tackle a tough York Institute squad.