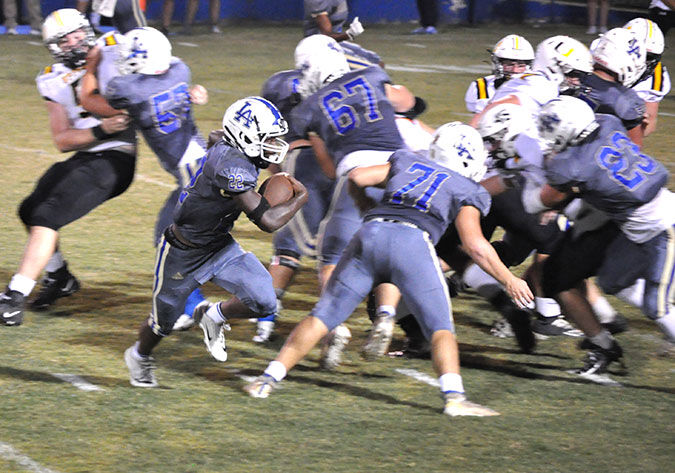 With great blocking up front, LA running back Kaleb Robinson heads for the outside and some of his 177 yards rushing on the night. 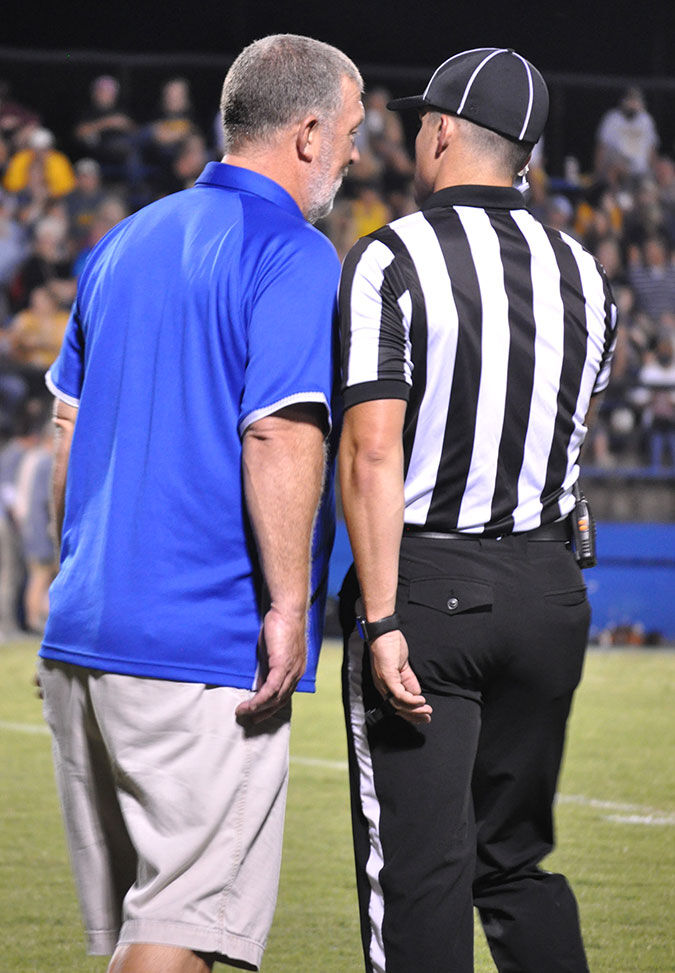 LA head coach Bruce Lamb confers with an official on a call in Friday’s contest with Upperman.

With great blocking up front, LA running back Kaleb Robinson heads for the outside and some of his 177 yards rushing on the night.

LA head coach Bruce Lamb confers with an official on a call in Friday’s contest with Upperman.

To say the least, there was a lot of emotion in the Livingston Academy field house after Friday night’s rivalry game with Upperman. Back slapping, fist bumping, etc. and just about anyone who was asked had a reason for the big victory.

“Don’t doubt us,” Wright exclaimed. “This team has a message to get out and tonight I think we went a long way to calm those who thought we wouldn’t be all that good after last year’s record setting team. Well, go over there and asked them (Upperman). If they tell you the truth, they’ll admit that this team has fight and a lot of it. Tonight we put it all on the line and won. We’re a lot better and we’ll get even better.”

If that’s the case, then, Stone Memorial had better get ready for a long night of hard-nosed football this week when they come to Tom Davis Memorial Stadium. Wright and his teammates will be waiting to lay out more evidence that the 2020 Wildcats have a lot of bite.

In their first home appearance of the season, the Wildcats and Bees battled tooth and nail all night and it finally came down to a big play late in the game that gave the Wildcats their third victory of the season in a thrilling 21-14 win.

“I’m so proud of this team,” head coach Bruce Lamb told his squad after the win. “That was football at its best, and you put out the best effort any team of mine has put out in the 12 years I’ve been here.”

No one on the Livingston side of the field would disagree, and even the Upperman faithful couldn’t disagree. It was line up and go at it football, and on this night, the best team came out on top.

Of course it took some supreme efforts from the players on the field, and when it came time for the local radio station, WLIV, to pick an offensive and defensive player of the game, there was no question on the offensive player, but the game had to go almost to the end for the defensive selection, and it was almost ironic.

Last week, in the mud of Cumberland County, LA running back Kaleb Robinson sloughed out roughly 140 yards on footing that was horrible. On the dry, beautiful manicured field at Livingston this time out, the running back slipped and turned at will and punished Upperman’s defense for 177 yards on 30 carries and scored all three Wildcat touchdowns.

And when he wasn’t ripping Upperman for ground yardage, the senior’s defensive play at linebacker was credited with three tackles, two pass receptions for 13 yards, and topped off his night with a pass interception.

Robinson could have easily been both the offensive and defensive player of the game, but there was a critical moment to come late in the game that evened things up.

In the game, neither team could score in the first quarter, but the Cats were on the move late in the frame and on the first six plays of the second quarter, Robinson put on a running clinic, ripping Upperman on runs of 12, 5, 3, 22, 18, and 21 yards to get the ball to the 4.

It took only one try from there for Robinson to put the night’s first score on the board. The kick for the extra-point failed and LA led 6-0.

On the very next offensive series, Upperman marched down the field unstoppable, but aided with two critical third and long situations that ended in 15-yard penalties against LA, and pumped new life in the drive. With 1:49 left in the half, the Bees scored from 24 yards out, added the PAT, and took a 7-6 lead to the dressing room.

Livingston kicked off to Upperman to start the second half and on the first play, the Bees tried a pass that Robinson intercepted and took it to the 10 yard line. Two plays later, Robinson bulled over for the go-head score. Quarterback Nathan Cowgill hit Nate Carwile over the middle for the two extra points and the lead, 14-7.

Upperman tied the score early in the fourth quarter following a pass interception and knotted the game at 14 with some 10 minutes remaining.

All night long, Livingston had used the hard running of Robinson to move the ball, although the Cats did try 13 passes in the game, but two were intercepted and most of the others fell harmlessly on the ground.

But, with about seven minutes remaining and overtime appearing a strong possibility, Cowgill found Carwile open right over the middle, hit him with a perfect strike, and the senior rambled some 40 yards before being caught from behind at the Upperman 10.

“I ran as hard as I could,” Carwile laughed, “but I’m not a track star by no means. They ran me down, but I knew Kaleb (Robinson) could score from that close in.”

He did two plays later, and after Mitchell Watson hit the point-after, Livingston had the winning margin, 21-14.

But the game still had over 6 minutes remaining and Upperman had the ball. On a fourth and 3, the Bees tried a pass and Cowgill, playing defensive linebacker, intercepted it, but fumbled and Carwile was right on the spot to recover.

Livingston had another shot on offense but a 45-yard field goal fell just short and Upperman had one more shot. The Bees moved the ball almost to midfield, but Cowgill again stepped up and intercepted a pass with 53 seconds remaining. Game over.

And while Robinson had the offensive player of the game wrapped up, Cowgill, the quarterback, playing defense, got the defensive honor.

“I threw two interceptions in the game, so I needed two interceptions to make up for it, and that’s what happened,” Cowgill commented after the game. “Really, I hate throwing interceptions, but coach (Matthan) Houser is working with me on that a lot, and coach (Steve) Mosley used to tell us in Junior Wildcats that after a mistake take two steps and forget it. I’m trying to do that.

“Playing on this field made things a lot easier this week from our past games, no rain no mud, just great turf. The offensive line gets a lot of credit tonight, and Kaleb will tell you that. They made all this happen.”

The defensive line handled things quite well also, holding Upperman to a total of 181 total yards. Wright and Austin Reeder led the attack with 7 tackles each, Raven Carpenter had 6 followed by Carson Smith and Carwile with 5 each. Jaden Lawrence had 4, Xander Cantrell and Robinson each had 3, Clay McDonald, Cowgill, and Bryer Mosley were good for 2 each, with Watson, Daniel Hill, Gage Hoffman, and Will Brown each getting 1. Although Watson only had one, it was a touchdown saving hit on a kickoff.

With the win, Livingston has now beaten Upperman two straight times, and over the 42-year history of the rivalry, the Wildcats lead in the series, 32-9-1.