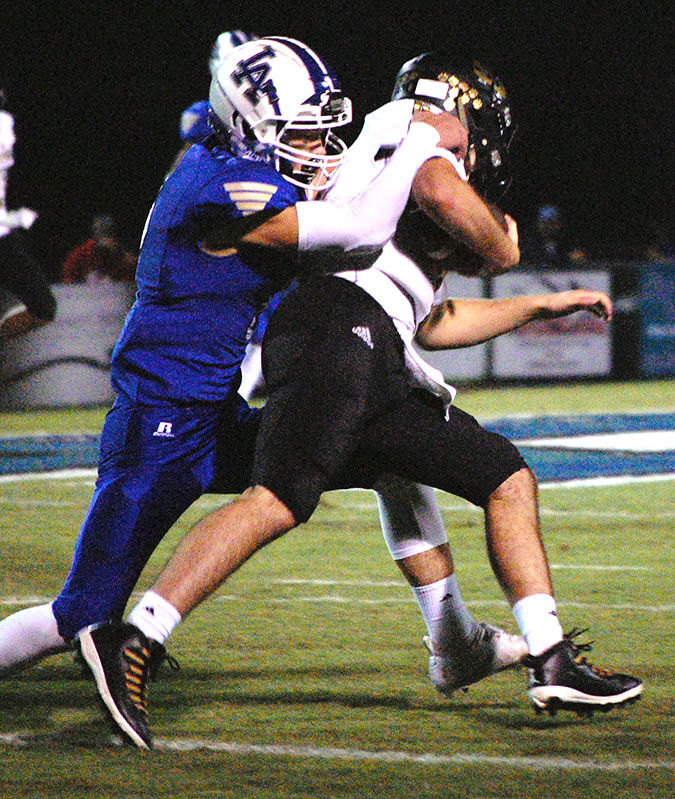 Livingston Academy’s Xander Cantrell makes one of his 18 tackles on the night. 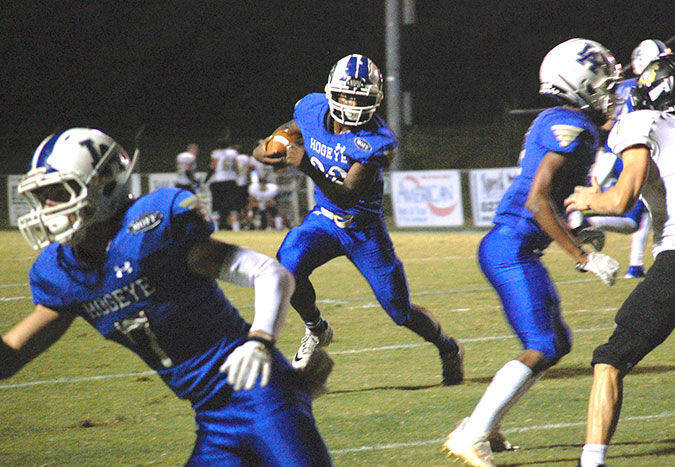 Kaleb Robinson eyes a hole the LA defense has opened in the Stone Memorial line. 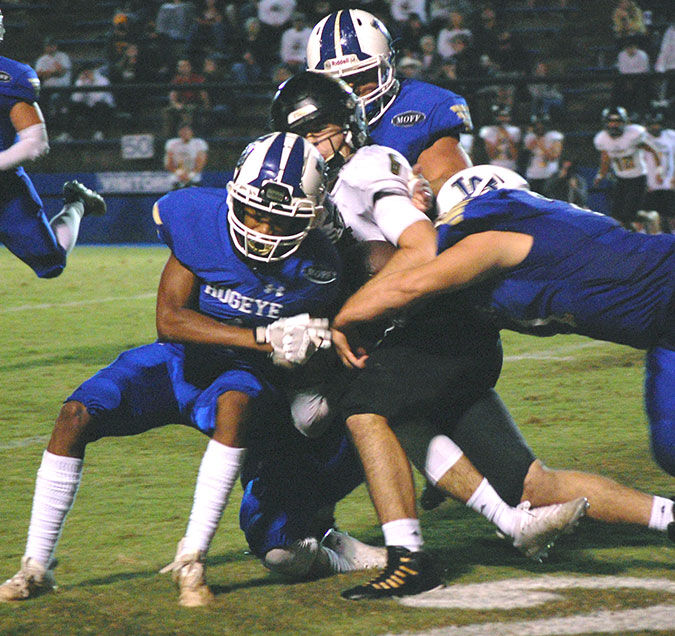 Raven Carpenter along with a passel of his LA defensive teammates stop the forward progress of the Panthers ballcarrier.

Livingston Academy’s Xander Cantrell makes one of his 18 tackles on the night.

Kaleb Robinson eyes a hole the LA defense has opened in the Stone Memorial line.

Raven Carpenter along with a passel of his LA defensive teammates stop the forward progress of the Panthers ballcarrier.

In the history of the series, Livingston Academy and Stone Memorial have clashed 15 times with the Wildcats holding a 9-5 advantage in the win department. Over the past 10 meetings, each team has won five times, so Friday’s meeting in Livingston would break that meaningless tie and an LA win would assure a playoff berth and possibly a first round home game.

“We didn’t consider all that, “ lineman Jordan Brown smiled after the game. “We just want to win every game, and this was just the ‘next one’. Looking at it, it wasn’t our best effort of the season mainly because I think we are still tired and emotionally drained from that big win over Upperman. The win gives us a 4-1 record, something I don’t think many believed we could do, but this is a very good team and we are rolling now.

“Smith County comes here next week and they will be another strong match, but we’ll be ready for whatever they bring.”

When Stone reached Tom Davis Memorial Stadium Friday night, the Panthers were struggling with a 1-3 record, but before the 28-6 final outcome would post on the scoreboard, they would present the Wildcats with some trying times.

“It was a win and we’ll take it,” LA head coach Bruce Lamb told his team after the game. “It wasn’t pretty at all, but I do think it is hard to get up for two games in a row after beating Upperman last week. Let’s come back Monday ready to go to work and get ready for Smith County. They’ll be looking for some revenge ( Livingston beat the Owls, 38-13 last year).”

For the first time this season, the weather was “just right” for football. After opening the season with two wet games, one very hot night, and a fourth warm, the feeling of fall was in the air when the game got underway and a good sized crowd was on hand to enjoy both the game and the weather.

“It was a real good night for football,” senior Nate Carwile pointed out. “Our field is in great shape, there’s a good crowd, and the air is nice and cool. Let’s play.”

And so they did.

Things started slowly for both teams but in the final minute of the first quarter, LA’s workhorse, Kaleb Robinson completed a 54-yard drive from five yards out for the night’s first score. Mitchell Watson would add the point after and Livingston led 7-0. Only four plays later, Stone was forced to punt deep in its own territory and a bad snap and good tackle by Brown gave the ball to the Wildcats at the Stone 18.

It took Robinson only three plays to cover the distance with some fine blocking up front to add to the LA score. Watson was true with the PAT and Livingston took a 14-0 lead.

“Running was a little tough in the first quarter because they (Stone) were really aggressive and just covered me up,” Robinson pointed out, “but in the second half, Dexter (Wright) and Carson (Smith) and Noah (Sliger) and all those guys on the line really did a great job. On those two long runs, the line did a super job of blocking and all I had to do was keep from stepping on the players on the ground.”

Before the night was over, Robinson would score three of Livingston’s four touchdowns and ramble for 203 yards on the ground. It was the first time this season he’s been over the 200-yard mark.

“I really wanted 200 yards,” the senior running back added, “and give the credit to the offensive line.”

“Blocking is just as much fun as tackling,” Wright would proclaim after the game. “When you put a defensive player on the ground, that’s the best feeling in the world. We were a little sloppy in the early going tonight, but in that second half, we picked up the blocking and Kaleb found the holes.”

Stone would score its only touchdown with 4:50 remaining in the half on a fine 80-yard drive. The Panthers would go for two points and fail.

Late in the third frame, quarterback Nathan Cowgill would team up with Raven Carpenter on a play that made everyone in the stadium remember the Will McDonald-Wesley Smith combination last season of putting the ball right in the hands of the receiver in the corner of the endzone.

With only 19 seconds showing on the clock, Cowgill threw a perfect pass to the corner and Carpenter was right there for the TD. Again Watson was true on the PAT and the Cats now had a commanding 21-6 lead.

In the opening minutes of the fourth quarter, Robinson would rip off runs of 43 and 35 yards back-to-back behind Wright’s blocking, then go the final 13, again behind Wright, for the night’s final score.

Defensively, Xander Cantrell had the biggest night of his 4-year career, leading the Cats with 18 tackles.

“Every time I looked, they (Stone) were coming in my direction,” the linebacker said. “I did my best to take them down, and sometimes I got help and sometimes I let the runner get away, but I think I’ll always remember this night. I hit them and they hit me and I had a good time.”

Wright was credited with 8 tackles followed by Carson Smith with 7 and Carwile with 6. Austin Reeder had 4, Cody Garrett had 3, all on kickoffs, Cowgill added 3 as did Ethan Rumancik and Bryer Mosley. Carpenter, Daniel Hill, and Lochlan Hammock each scored 2 along with Jaden Lawrence and Carpenter. Robinson and Watson each added 1, but Watson’s was a highlight of the night when he made a TD saving knock down on a kickoff return. Cowgill had the night’s only pass interception.

Livingston Academy will round out a 3-game home stand this week with Smith County then will travel to DeKalb and White County the following two weeks.