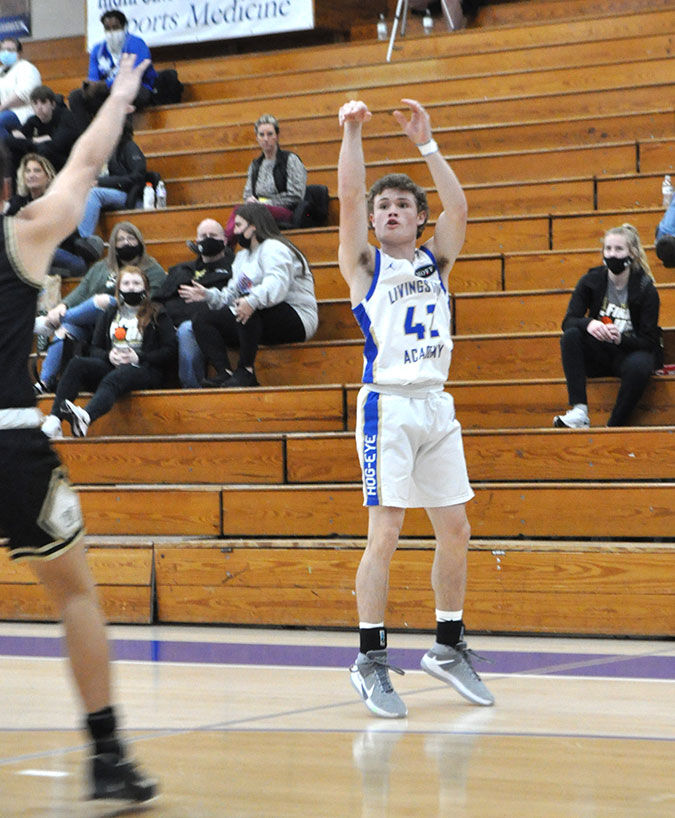 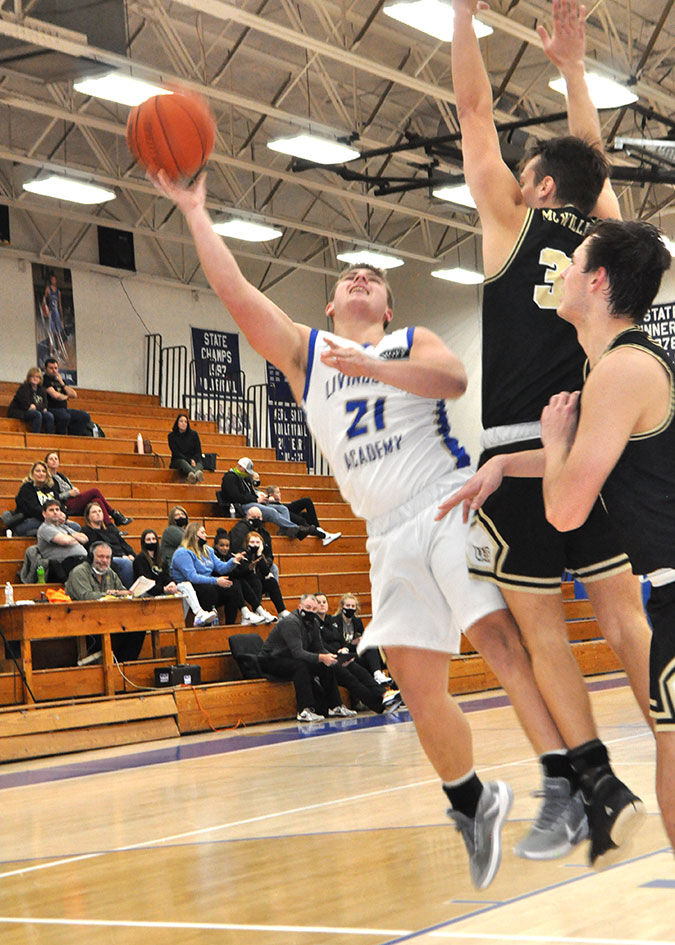 Nate Carwile tries a hook shot to get around Upperman defenders.

Nate Carwile tries a hook shot to get around Upperman defenders.

After falling to Pickett County last Monday, Jan. 4, the Livingston Academy Wildcats were seriously looking for something to stop a five-game losing streak, and when the call came from Upperman to see if a make-up game could be worked in on Tuesday, it took no time to decide – let’s play.

“Upperman would not be your first choice to play if you were looking to stop a losing streak, but I really felt like we needed to play regardless, and I thought, and the team did also, we could beat them,” LA coach Jimmy Miller said after a very hard fought 73-58 loss by his Wildcats, which was actually a much closer game.

“We lost, and you never want to accept a loss, but there were a lot of very positive things happened tonight that are very hopeful.”

One of the bright spots in the defeat was the outstanding play of sophomore guard Isaac Story.

“Where has Jimmy (Miller) been hiding that #42,” were the first words out of the mouth of Upperman coach Bobby McWilliams? “That kid came to play and did a really good job keeping us on our toes all night. He’s going to be a player.”

At the start of the season, Story was just another name on the roster, but his determination and hard work has earned him a starting spot, and he’s determined to keep it.

“I really wanted to play and worked as hard as I could to play,” Story began, “and I’ve finally earned a starting spot and really have a good time playing. I’m not the biggest player on the team, and probably nowhere close to being the fastest, but I do know working hard to find what I can do best has paid off.

“I found the range against Upperman tonight, and once the shots started falling, I just tried my best to keep shooting. Somebody has got to make points to keep some of the pressure off Matthew (Sells), and tonight it turned out to be me.”

Before the night was over, the sophomore would account for 14 of Livingston’s points, including four from three-point range.

“Isaac is a very coachable young man,” Coach Miller added. “You tell him what to work on and why, and he’s all over it, working as hard as he can to make it happen, and it showed tonight.

“Another thing that I thought went well for us was the way we hung in there and never gave up. At one point we had closed the margin to about six or seven points, which showed our team we could play with them. The biggest problem we had was when we did pull that close, Upperman turned around and answered, and Bobby (McWilliams) has a team that can do that.”

Another drawback to Tuesday’s game was the absence of inside player Nick Choate, who had tested positive for the coronavirus early in the week.

“That was big,” Story continued. “They (Upperman) have Alex Rush, and at about 6-9 or 10, Nick was the closest we had to him and he was out. I thought Dawson Simmons did a good job trying to slow him down, and Bryson (Tucker) came in and also did good.

“We’ve had some setbacks from everywhere like the virus, etcetera, but I think if we can get back on a roll, play steady and work hard, we’ll be okay. We had a really good practice yesterday.”

Upperman brought an 8-3 record to the game while Livingston came 6-5 and on a losing skid. Story hit his first three-pointer on the Wildcats’ first possession and Sells added another to knot the score at 6. Story’s second three tied the game at 9, Simmons tied it at 11, and the Bees grabbed the lead at 13-11 at the end of the initial frame.

In the second period, Upperman took control, scoring 16 points to only eight for the Wildcats, including six from Sells and a pair of free throws from Nate Carwile. Upperman enjoyed a 35-19 lead at intermission.

Early in the third period, Sells hit a field goal that moved him to second place on the all-time LA scoring list, getting past principal Richard Melton, who had held second with 2,250 points. Sells would end the night with 23 points and a career total thus far of 2,264. Chase Dunn holds the record at 2,508.

With two late three-pointers, one by Tucker and one by Sells, Livingston entered the final frame just 11 points back, and a three by Story midway through the frame closed the gap to eight, 52-44, but the Bees stiffened and would move on to the win.

“Livingston is a better team this year,” McWilliams continued, “and they made us work hard tonight. We have a good team as well, and this isn’t the last time we’ll see each other.”

“We showed some promise there at the end, and that’s good,” Miller added. “Against Upperman, you can’t make a single mistake or they’ll hurt you, especially with a kid like Rush who’s not only big, he’s good. I thought Simmons played extremely hard, and Hunter (Coffman) did a good job when he was in there. It’s been a lot different this year with the virus, losing Hayden (Ledbetter), and players testing positive, but we’ll get through it, one way or another.”

In addition to Sells and Story, Carwile had 7 points and Tucker had 9, while Huffman, Simmons, and Eli Melton each added 2.

Friday’s game at Macon County was postponed due to the virus and will be played at a later date.