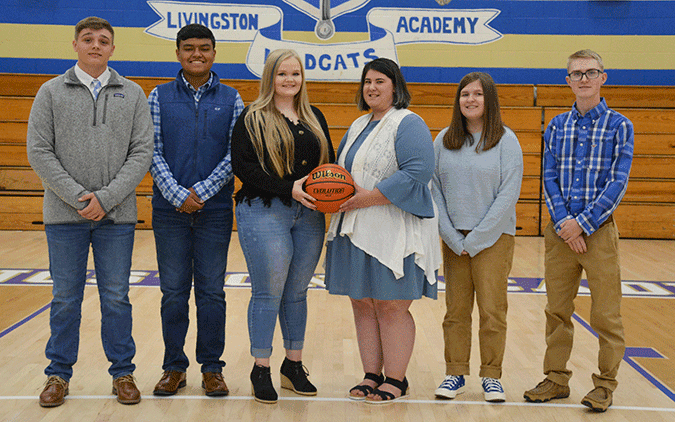 “We’ve lost very good players in the past and rebuilt just fine,” pointed out Livingston Academy head basketball coach Jimmy Miller, “and we’ll do it this time. It might be a little different when you are talking about losing Matthew Sells.”

For four seasons, Sells led the Wildcats and became the school’s leading scorer, and also set a one-game scoring record (51). When a player of that caliber graduates, it does get the attention of a lot of people, especially opposing coaches. Ask any of them and they will say almost the same thing: he was a great player and we’re glad he’s gone.

Sells posted 2,672 points during his four seasons as a Wildcat and averaged 23 points per game his senior season, and that could have been much more, but most teams surrounded the talented shooter and let the rest of the team do what it could.

“Had Hayden (Ledbetter) not gotten hurt early in the season, the other teams couldn’t have double-teamed Matthew and we would have been a little more balanced and better.” Miller continued. “But that was last year and we have to move on. Let me just say, it was a pleasure and privilege to have coached Matthew, and I wish him the best in college. He was an exceptional young man.”

Looking at this year’s squad, Sells will indeed be missed, but like senior Dawson Simmons explained: “We can’t wait to get started. We are going to be good.”

Miller has four experienced seniors back this year, including Simmons, Nick Choate, Ayden Coffee, and Ledbetter. Ledbetter has yet to play a full season due to injury, but his determination is unsurpassed.

“Hayden could have just missed this season after last year’s injury and concentrated on golf,” Miller continued about one of his tallest and best shooters, “but he chose to have the operation, go through rehab just so he could come back and play. What else can you say about that?”

Choate has gotten stronger, both in his rebounding and inside play, and will be a dominant factor all season.

“Nick just gets better and better,” Miller added. “He’s a hard worker, and wants to be good and will be good with that attitude. He’s going to be fun to watch.”

And so will Simmons. This year Miller pointed out that Simmons will have a special role and won’t reveal it until the season, but shows a big smile when it’s brought up.

Coffee, like Ledbetter, could have skipped the season after suffering a shoulder injury during football, but selected surgery so he could play his final season.

“I have been with this team all through school and I didn’t want to miss the season,” Coffee admitted. “This is going to be a fun season and an exciting one as well. Can’t wait to get well and start playing.”

Juniors Eli Melton, Isaac Story, and Easton Goodpasture will share much of the playing time along with Jacob Morgan and Peyton Looper.

“There’s a lot of playing time in that group,” Miller went on. “Eli and Isaac were a big part of our success last season, and with a year’s experience added, they will again be key. Isaac, when he finds the three-point range, is deadly, and Eli plays hard every minute he’s on the floor.”

Daniel Bilbrey leads a small but talented group of sophomores including Wyatt Hargis and Brodey Coffee.

Daniel “is the fastest player I’ve coached since Carter Hayes,” Miller smiled. “I mean to tell you he’s quick, and he can shoot. Watching his progress is going to be something special, and he will certainly add to the quality of this year’s team. Coffee is also good, but they might kill him at football before he gets here.”

Coffee is the quarterback for the Wildcats football team this season.

“As we can, we’ll work in the younger players,” Miller explained, “but it’s such a big jump for them from grade school to high school. It’s a process that just takes time. “

One thing the team won’t have to face this season is the lockdown due to the Coronavirus and the consecutive days of playing make-up games that had a tremendous impact on last year’s season. There were times when the team, including the girls team, played 14 games in a row, and it showed.

“That was one of the toughest things I’ve ever gone through, and I’m sure Lesley (LA girls coach Lesley Riddle) will tell you the same thing. Looking back at that, it was quite a feat just to finish the season.”

Last season, the Wildcats finished the regular season 15-10 and finished third in the district at 10-4. The Cats went on to reach the regional tournament and lost to Upperman 40-30 to finish 19-12 overall.

“With all that we went through last season, that wasn’t all that bad,” Miller concluded, “but this time out, I’m looking for better things, and this team is also. It’s a seasoned team and we’ll do well. The district is a little different this season, and we won’t play some of our longtime rivals, but we’ll have our hands full regardless.”

Nate Kennard will once again be in the seat beside Miller courtside as the Wildcats’ assistant coach.