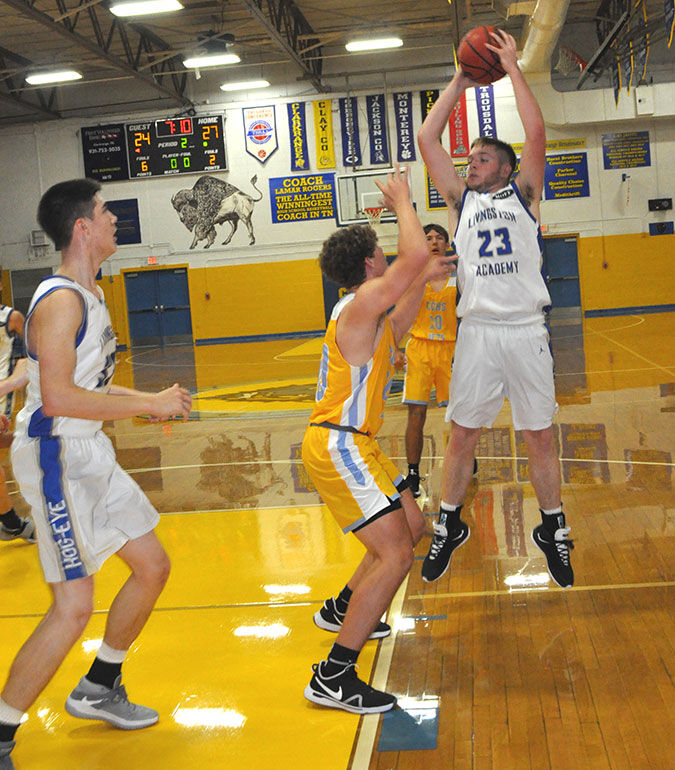 Dawson Simmons shoots over a Cumberland player in last Saturday’s tournament at Clarkrange. 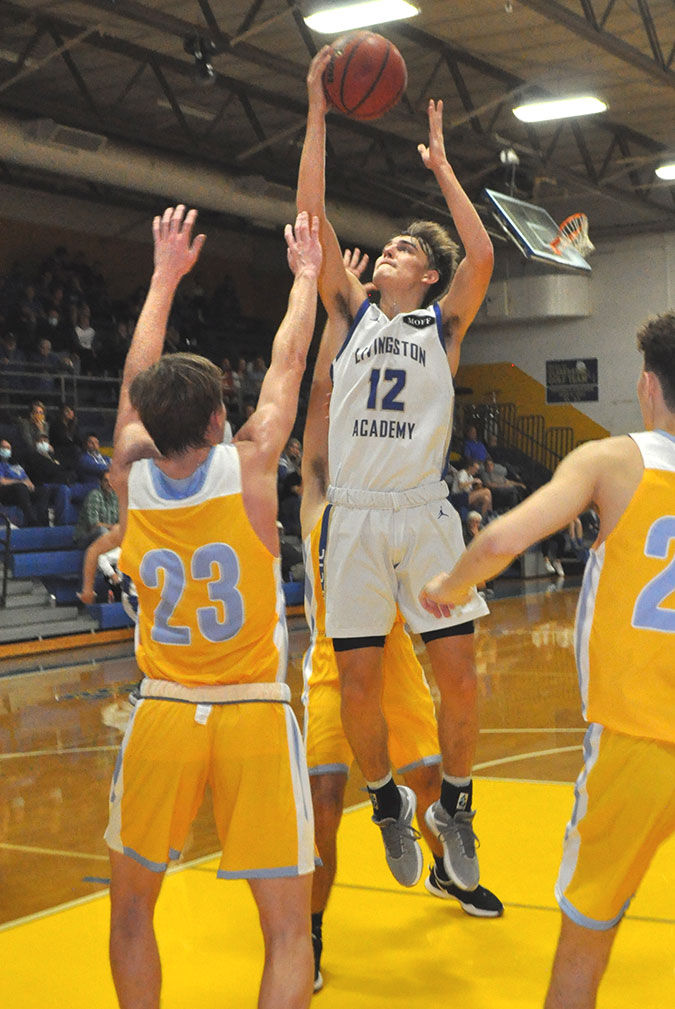 LA’s Matthew Sells goes up for two of his game high 26 points against Cumberland County. Sells is now in the LA 2,000-point club. 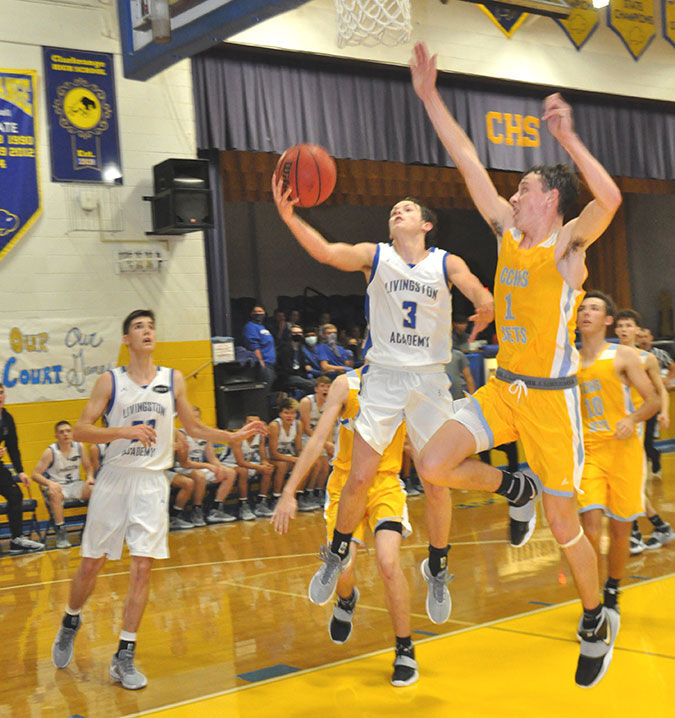 LA’s Eli Melton goes inside for a lay-up against Cumberland County.

Dawson Simmons shoots over a Cumberland player in last Saturday’s tournament at Clarkrange.

LA’s Matthew Sells goes up for two of his game high 26 points against Cumberland County. Sells is now in the LA 2,000-point club.

LA’s Eli Melton goes inside for a lay-up against Cumberland County.

When it was all said and done, there is little question that the biggest moment Saturday at the Clarkrange Hall of Fame Play Day was when Livingston Academy’s Matthew Sells joined an elite group of Wildcat players who have topped the 2,000-point mark in their career.

That would be unless you talked to Sells himself. In that case, it might just have been his seven assists in the Wildcats’ second game of the day when they had to fight back late in the game, then hold on and play hard-nosed ball to win over a fine shooting Cumberland County team.

“Like I told you last week,” the senior Wildcat started out in the locker room shortly after Livingston had posted its second win of the day, “scoring points is not all I like to do. To me, playing the game and playing it the right way is a lot more fun. Those assists I got in that game (against Cumberland County) were just as much fun as the points (26 in the game) I made. A good pass to me, is what I really like to do. When you make a pass to a teammate and they score, then it’s as good as you scoring.”

Just another reason Sells will go down as one of LA’s finest players. When the first game of the day started, there was no doubt Sells would cross the 2,000-point mark. All he needed was four points after an 18-point performance earlier in the week at Independence High School in Franklin.

When the season started, only three other Livingston Academy players – Chase Dunn (2,508), Richard Melton (2,250), and Mason Ramsey (2,231) – had accomplished the feat, and surely Sells would quickly join the group.

Against host team Clarkrange, Sells got his fourth point early in the first quarter, scored four more, then sat down to rest for the second game of the day, which promised to be much tougher than the Buffaloes.

In that game, Livingston had little trouble, rolling to a 62-27 win. Junior Nick Choate was the Cats’ leading scorer with 22 points.

Freshman Wyatt Hargis added 8, Eli Melton and Isaac Story each had 7, Ayden Coffee and Dawson Simmons each had 6, Nate Carwile had 3, and Brodey Coffee and Hayden Ledbetter had 2 apiece.

It would be the second game of the day where Sells and all his teammates would get in the limelight together. With a 49-46 loss at Independence back on Thursday night and the win over Clarkrange, the Wildcats were about to take on a solid team of Jets and would put on a performance that would resemble a team in mid-season instead of the third game of the year.

In the season opener on Thursday night in Franklin, Livingston faltered late and fell by three, 49-46, to Independence. Sells had 18 points in that game while Melton had 10, Ledbetter 6, Carwile and Choate 4 each, and Simmons 3.

“That’s the way we want to play,” Choate would point out after he and the Cats fought back late in the game to snatch an 82-79 win away from Cumberland County, who appeared to be in the driver’s seat late in the game. “We played that game like it was late in the season. We made very few mistakes, passed the ball well, scored on inside shots, outside shots, and our defense really came alive when it had to. It was a really good win.”

And the big junior’s words were not the only ones kind to the Wildcats. Moments after the win, head coach Jimmy Miller praised the team for the total effort, the fine play, offensively and defensively, and the fact they never doubted they would come back and win.

“That was not a pre-season win,” Miller told his squad in the locker room. “You played that game like it was late in the season. That’s the best win in recent memory, and you did a lot of very good things out there today. You played good offense, good defense, you passed the ball well, rebounded well, shot well. You just did a lot of things very well. That was a lot of fun because you beat a very good team doing the things you’ve worked so hard on doing all summer. That was what you were supposed to do.”

In the game itself, it stayed close for the entire 48 minutes, with Livingston leading 27-21 at the end of the first quarter and trailing 43-39 at the half. In the third quarter, the Jets refused to allow LA to take the lead, responding to every LA point, mostly from long range. On the night, Cumberland would make 10 three-pointers.

Things got real serious at the start of the fourth period. Sells hit a three to pull LA to within one, 62-61, but the Jets responded with four straight points to move out by 5. Choate and Sells then team up for four, then Choate made a free throw at the 4:34 mark to tie the game at 68.

When the Jets started back down court on the next possession, the ballhandler just dribbled then left the ball on the floor right in front of Livingston’s Story, who picked it up, drove the lane for the go ahead two, 70-68, and the Cats never trailed in the game.

Critical free throws by Carwile and Melton steadily built a 6-point LA lead, then Sells settled the event with a pair of free throws with less than 10 seconds remaining.

“We just would never give up,” Simmons said after the game. “They scored and we scored and back and forth, but our overall play just did it for us. It was a really good win.

“After that easy win in the first game, I was a little nervous we might lay an egg in that second game, but we didn’t and that says all that needs to be said. It was a fine effort.”

Sells pushed his career total 2,060 points with his game high 26 points. Choate had another strong showing with 17, and Hayden Ledbetter had a fine game, getting 13 points. Carwile had 8, Story 6, and Simmons and Melton 3 each.

“I really had fun today,” Ledbetter smiled. “I’m a junior and haven’t played due to a knee injury that has kept me on the bench for two years. Today I got to play and scored some points and got some rebounds, and it made me think back to when I played at Rickman in elementary school. Shooting and scoring and rebounding, it was fun back then, and it was really fun today.”

With a 2-1 record, Livingston Academy will take Thanksgiving off then return to the hardwoods at the Heritage Thanksgiving Classic on Friday.