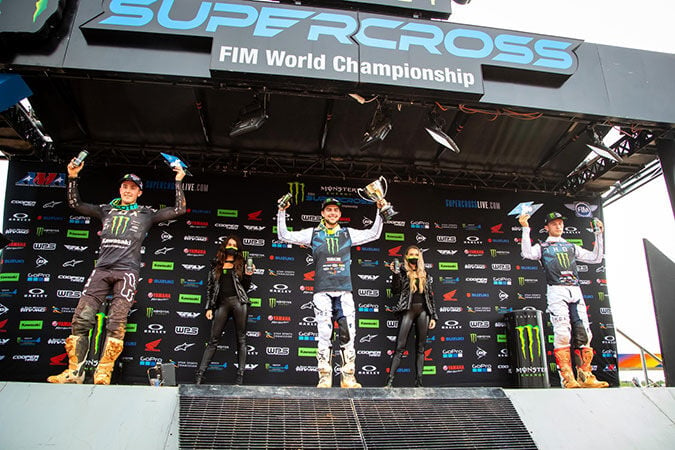 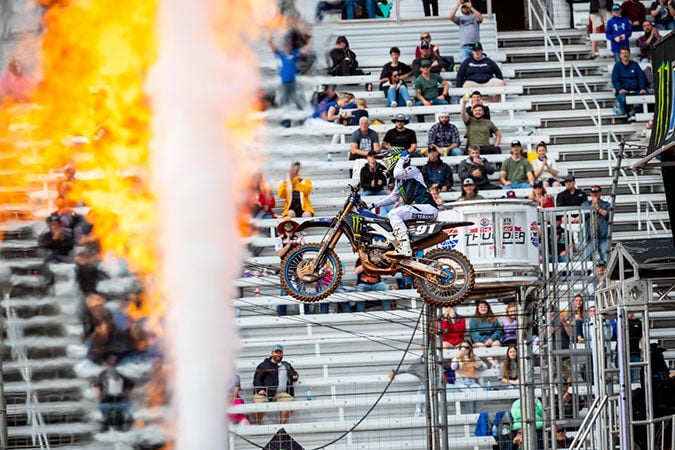 Rookie Nate Thrasher, of Livingston, topped his best previous finish by eight spots to capture a win at the first of three races at Atlanta Motor Speedway.

Rookie Nate Thrasher, of Livingston, topped his best previous finish by eight spots to capture a win at the first of three races at Atlanta Motor Speedway.

Monster Energy AMA Supercross, an FIM World Championship series, kicked off a triple-header at Atlanta Motor Speedway with a daytime event where Monster Energy Kawasaki’s Eli Tomac used speed and patience to pull off a dramatic win, his third of the season, in front of the limited-capacity, pod-seated fans.

In a heart-breaking loss, Team Honda HRC’s Chase Sexton led for over four laps before a run-in with a lapped rider cost him the lead with the white flag in sight.

Series points leader Red Bull KTM’s Cooper Webb ran in second early in the race but had to settle for a third place finish when the checkered flag came out.

Thrasher nearly grabbed the holeshot even with a poor gate pick due to a trip through the Last Chance Qualifier. Once into the early lead the Yamaha rider looked picture perfect on the slick red dirt. Thrasher held on without any major mistakes through the 13-minute plus one lap event; a 2-minute abbreviation due to a schedule affected by the mid-day rain and mud.

After grabbing the holeshot, McAdoo got shuffled back. The Kawasaki rider moved aggressively forward but a crash in the whoops three and a half minutes into the race ended his early charge to get back into the lead. McAdoo recovered to round out the podium.

The second race of Atlanta’s triple-header drops the gate on the final SuperTuesday event of the season on April 13, then wraps up the Atlanta residency on Saturday, April 17. Tickets for the Atlanta races as well as the final two rounds in Salt Lake City, Utah are available in a limited capacity, pod-seating format. For more information on the race schedule, updates, and to catch the races on Peacock and NBCSN visit SupercrossLIVE.com.