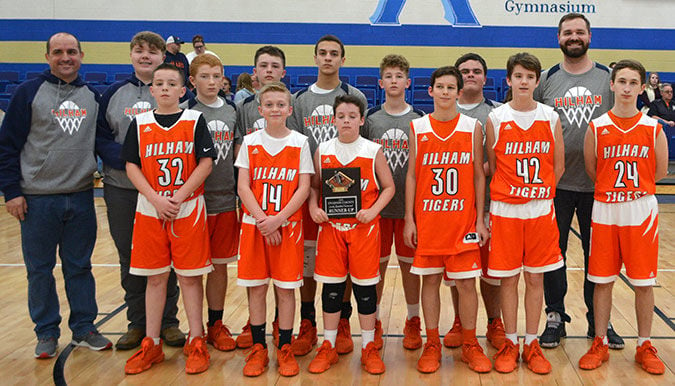 Of all the basketball fans on hand Saturday morning at the Livingston Academy gym, perhaps the most interested in the outcome of the Overton County Elementary Varsity Tournament were Lady Wildcats head coach Lesley Riddle and her assistant Billy Sells and head Wildcats coach Jimmy Miller and his assistant, Nate Kennard.

Everybody else on hand was pulling for their favorite elementary school team whether it was Hilham or Allons, Rickman or Livingston Middle School. The coaches were looking down the road at the players that one day soon would fill their rosters.

And what did they see?

Riddle and Miller both saw a lot of things they both liked and each simply said: ”Send them all, they look good.”

And they did. In one of the county’s most anticipated events featuring school kids, the county tournament is an event every player on every team wants to win and the parents and grandparents really take a serious interest in.

Actually, the event started back in middle January and was scheduled to be over by January 18, but several weeks of sickness in the district limited the days the tournament could be played. The semi-finals were actually played last Monday night, setting up Saturday’s championships.

Ask any coach there and none were bashful to say they were glad it was finally over. Take the same survey from the players and they were ready to continue on.

Action got underway at 9 a.m. Saturday when Allons and Hilham battled for third and fourth spot among the girls. Allons and LMS tangled for third and fourth place in the boys division an hour later then it was down to serious business when Rickman and Livingston Middle School squared off for the girls championship and finally, Rickman and Hilham fought for the boys crown.

In the initial game, Hilham’s Lady Hawks jumped out on top on Matea Dailey’s opening field goal and added a third on a free throw from Leah Cross. At the end of the quarter, the game was tied at 4.

Midway through the second quarter, Keely Mullins started a rally with a field goal that put her team on top 9-7, and at the intermission, Hilham was on top 18-7 and moving away. Hilham took the game 36-15. Matea Dailey led the winners with 18 points, Myla Dailey added 7 as did Mullins, and Leah Cross was good for 2.

Riley Cooper led Allons with 11 points with Alexas Turner and Bailey Hutchinson both getting 2.

In the battle for third and fourth in the boys division, Jake Hughes scored first for the Hawks then a 6-0 run by Allons put the game at 8-0 and it looked like a one-sided affair. But LMS started a comeback and a three-pointer by Will Brown early in the second period and two more later brought the Tigers to within four, 18-14, at intermission. Allons picked up in the third period and took the final margin by five at 37-32.

Kaiden Thomas had the hot hand for the winner with 17 points. Gage Harris added 6, Hughes and Wesley Keisling each added 4, and Nathan Keisling and Adrian Jenkins were good for two each. Will Spears led LMS with 13 points, Junior Steel had 6, Peyton Coleman added 5, and Ethan Westmoreland and Brown each added 4.

With the first two games out of the way, it was time for the girls championship, and by now, the Derward Vaughn gym was about full. It would be the third meeting of the season between Livingston Middle School and Rickman, and this time there would be a new winner. The Lady Tigers won both regular season games, but Rickman has been steadily improving, having won the J.C Haile state tournament several weeks ago, and the Lady Bulldogs were ready to go.

Mallie Gene Coleman got LMS on the board first, but Rickman roared by with five points from Tessa Hargis, a field goal from Kenley Webb for LMS, then another three-pointer from Hargis. Rickman led 17-10 at the end of the quarter. Mallie Carwile put back a shot to open the second quarter and Rickman was off and running again. Coleman and Lillian Bates hit for the Lady Tigers, then Carwile added two more for Rickman, and at the intermission, the Lady Bulldogs were on top 27-19.

Bates opened the third quarter for LMS to close the gap to 27-20, then Ellie Butler hit two field goals in the quarter to pull Rickman off again, 36-20, going to the final six minutes. Alora Budzilek’s three-pointer opened the fourth quarter for Rickman, and it was a matter of just running out the clock. Rickman won 43-25.

“It was one of our best games,” Carwile confessed after the win. “We really played as a team and things really were smooth.”

Matasia Goodwin added that it was a good feeling, “when we got ahead and could run some time off the clock. We played really good late in the season and this is what we wanted to do when the season started.”

Ellie Butler led Rickman with 13 points with Hargis adding 12. Paige Hamilton was good for 7, Carwile for 5, and Haillie Mosley, Goodwin, and Chloe Jenkins each added 2.

In the day’s final game, it was defending champs Hilham going against a fired up Rickman group, and the Bulldogs made it look easy after the first quarter. Daniel Bilbrey got the Dogs rolling to start the game, and a three-pointer by Hilham’s Evan Gentry kept the score close. It was tied at 5 after the first frame. Wyatt Hargis and Bilbrey kept the Dogs on top through the first half, then Tucker Miller found the long range, and going to the final quarter, Rickman was on top 43-17 and sailing away.

Rickman won 54-22. For rookie coach Wade Eldridge, it was his first championship as a coach.

“I just thought we played good defense all day,” Bilbrey commented after the championship.

Miller felt like, “We really played good together today, moved the ball around really good, and then took good shots. It was a team win, no doubt.”