Sign Up
Log In
Purchase a Subscription
You are the owner of this article.
Edit Article Add New Article
Welcome, Guest
News
Obituaries
Classifieds
e-Edition
Photos
Multimedia
Share the News
Advertise
About OCN
1 of 4 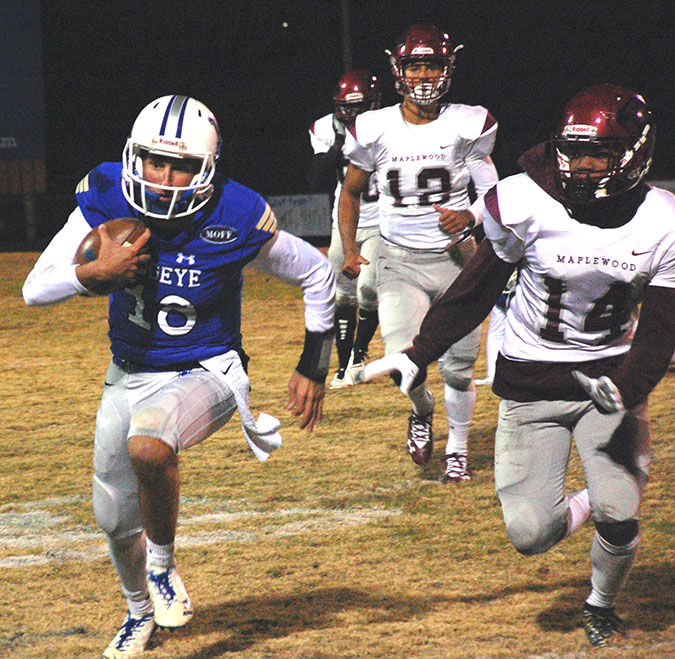 LA quarterback Will McDonald takes to the ground on a busted play and gains ground. 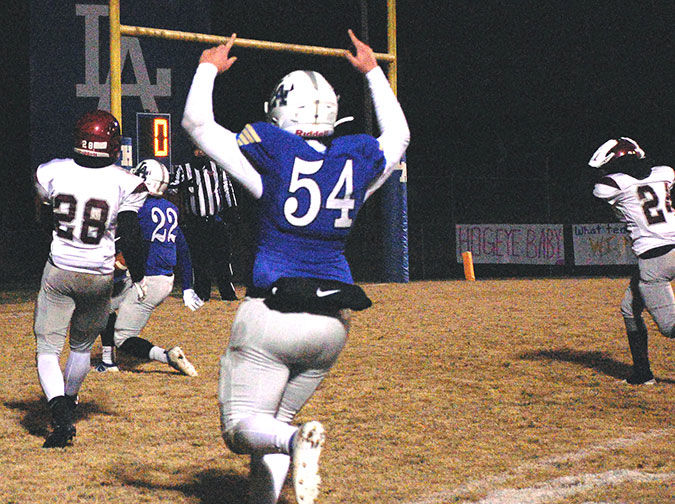 Body language shows it all. LA’s Dustin Parrish, #54, signals the Kaleb Robinson, #22, touchdown while a Maplewood Panther puts his hands on his head in disbelief. 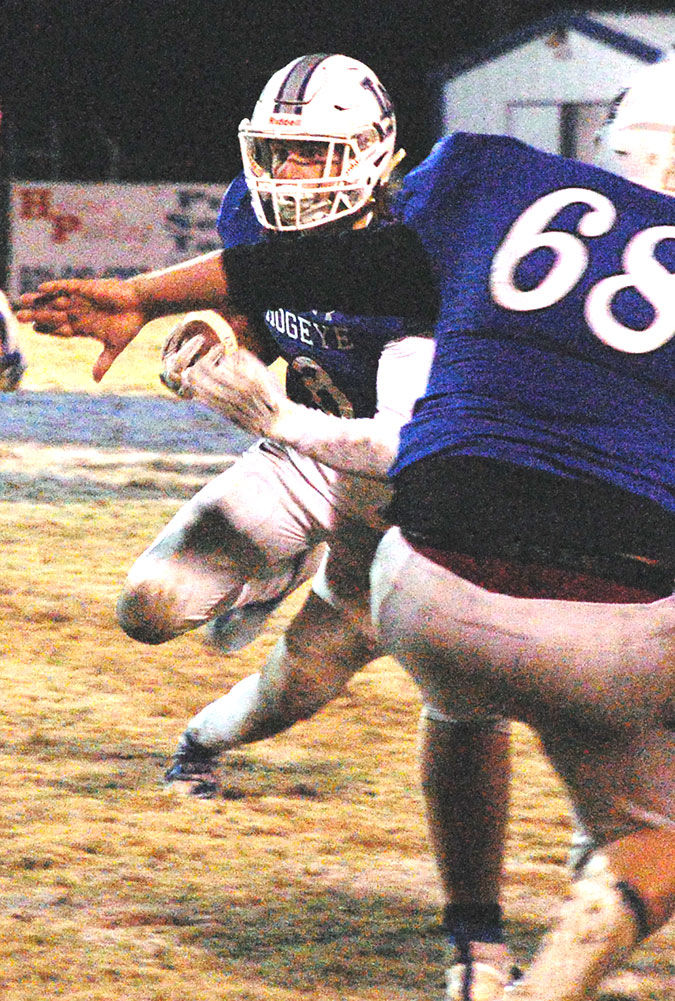 Knowing lineman Cole Spears, #68, will pick up the block, LA running back Nate Neely, #6, looks to running room ahead. 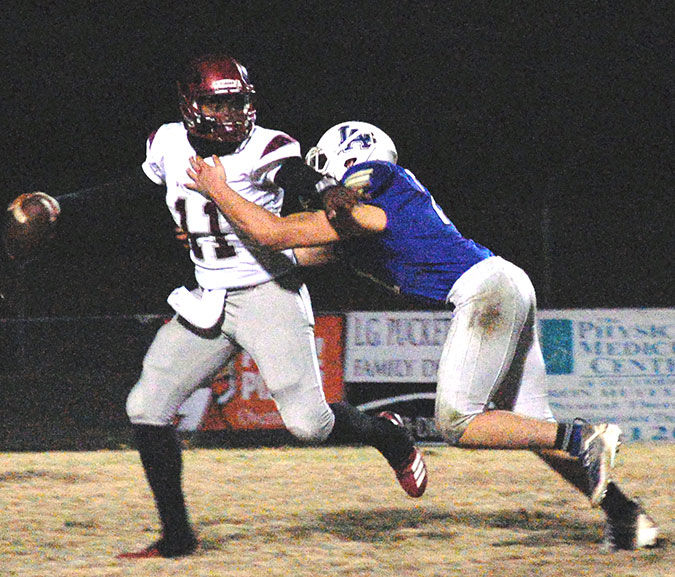 LA quarterback Will McDonald takes to the ground on a busted play and gains ground.

Body language shows it all. LA’s Dustin Parrish, #54, signals the Kaleb Robinson, #22, touchdown while a Maplewood Panther puts his hands on his head in disbelief.

Knowing lineman Cole Spears, #68, will pick up the block, LA running back Nate Neely, #6, looks to running room ahead.

On Friday, coaches around the state of Tennessee were scrambling to get their final thoughts and plans together for their respective TSSAA first round playoff games. Although Coach Bruce Lamb was in the same type of scenario, he was busy doing a little something extra: watching his youngest daughter Keelie play basketball at Trevecca in Nashville.

It created a possibility of – “What if Coach Lamb were to get stuck in traffic? What would happen then?” As it turned out, those were two of the very few questions that would be asked on Friday.

Another would be – “Are the Maplewood Panthers better than their record (3-7) indicated?” That answer came pretty quickly in the football game, but it wasn’t as “easy” early on as many of the Livingston faithful might have wished for.

Teams traded possessions in the opening quarter before Tee Beaty connected on a 27-yard field goal to get Livingston on the board and in the lead 3-0 late in the first quarter. That lead would never be threatened, but the need for improvement in the second quarter was noticeable.

In the second quarter, the Livingston Academy defense, who came into the game giving up 7.4 points per game, started to show out. The unit would force the first Maplewood punt of the night, and on the third possession of the night for the Wildcats, Livingston struck.

Will McDonald found Nate Neely for 20 yards to begin the drive on a screen pass before connecting with Wesley Smith for 8 more yards, and all of a sudden, Livingston was threatening to extend their lead to two scores.

Two plays later, Neely scampered for 18 to give Livingston a first and goal opportunity early in the second quarter. Livingston went for it all on the next play, but Maplewood would interfere on the possible Smith touchdown reception, and on the very next play after the penalty, Kaleb Robinson scored from 10 yards out to give Livingston a 10-0 lead after the Beaty extra-point.

The Wildcats’ defense stood strong again on the ensuing drive, forcing a Panther three and out to immediately bring out the offensive unit for the Wildcats. Here, Livingston had their best drive of the night as Neely, Smith, Hollars, and Robinson all touched the ball on the first five plays of the drive.

But it was Raven Carpenter, Livingston’s speedy wide receiver who plays opposite of Smith that reaped the benefits of the drive. McDonald found Carpenter for 7 yards on the sixth play of the drive, but it was lucky number 7 that stood out, as the junior raced by the defensive back to score on a pass from McDonald from 25 yards out to increase the Livingston lead to 16-0. Beaty once again put the extra-point through the uprights, and Livingston now looked to mail it in, leading by double digits early.

The next drive for Maplewood was miserable as penalties squandered any opportunity for a positive outcome, and on fourth down, defensive lineman Austin Reeder broke free and tackled the Maplewood back in the backfield, giving the ball and every bit of momentum right back to the LA offense.

Livingston would drive it deep on the ensuing drive, but an incompletion would see the drive stall out. Instead of risking losing points, Coach Lamb sent out Beaty to try a 25-yard field goal and increase the lead once again. The left footed senior would do just that, and with under one minute left in the half, Livingston led 20-0.

LA would get the ball to open the second half, but would not be able to do much with it, so they elected to punt the football away to the struggling Panthers offense. Here, though, catastrophe struck twice for Maplewood. After their best player was ejected for throwing more than one punch, it was Carpenter who came away with a miraculous fumble return touchdown on the very next play to give the Wildcats their final points of the game and a more than comfortable lead, 27-0.

Maplewood would get on the board to make the score 27-8, but would get no closer than that and see their season end, losing to Livingston Academy in the first round of the Class 4A TSSAA playoffs.

“Those guys were definitely the most athletic team we played all year,” explained Coach Bruce Lamb afterwards, “and we knew coming in it was going to be tough to run the ball and throw the ball on them. We knew on offense that they had a strong-armed quarterback, but our kids did a great job tonight, they worked hard all week and it paid off tonight.”

Also with the win, Lamb passed Matt Eldridge for the most wins at Livingston Academy all-time with his 82nd victory. Lamb has also won four of the eight district/region championships in school history, and was a part of the 2005 state championship staff.

“I guess more than anything, I’ve just not screwed things up,” a laughing Lamb said on passing Eldridge. “It’s all about the kids. You have to have kids that want to work and want to play hard, and I’ve always had that at Livingston. Our coaching staffs have always loved coaching these kids, and it makes it easy to come to work every single day.”

And on a night where yet another record fell, a beaming Lamb was equally proud of that trip to Nashville earlier in the day that saw the youngest member of the family help lead her team to a 40-plus point victory.

“She played well today,” he said. “It was a really great day for the Lamb family.”