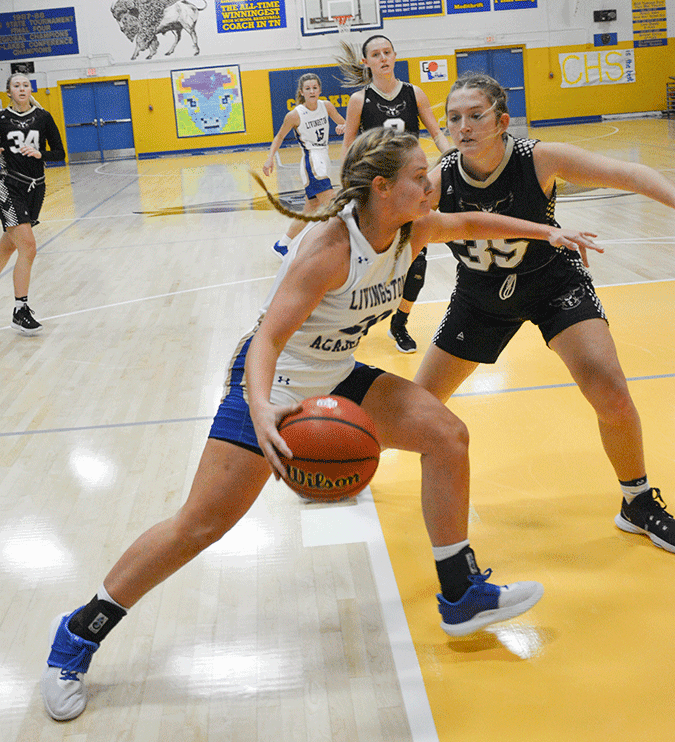 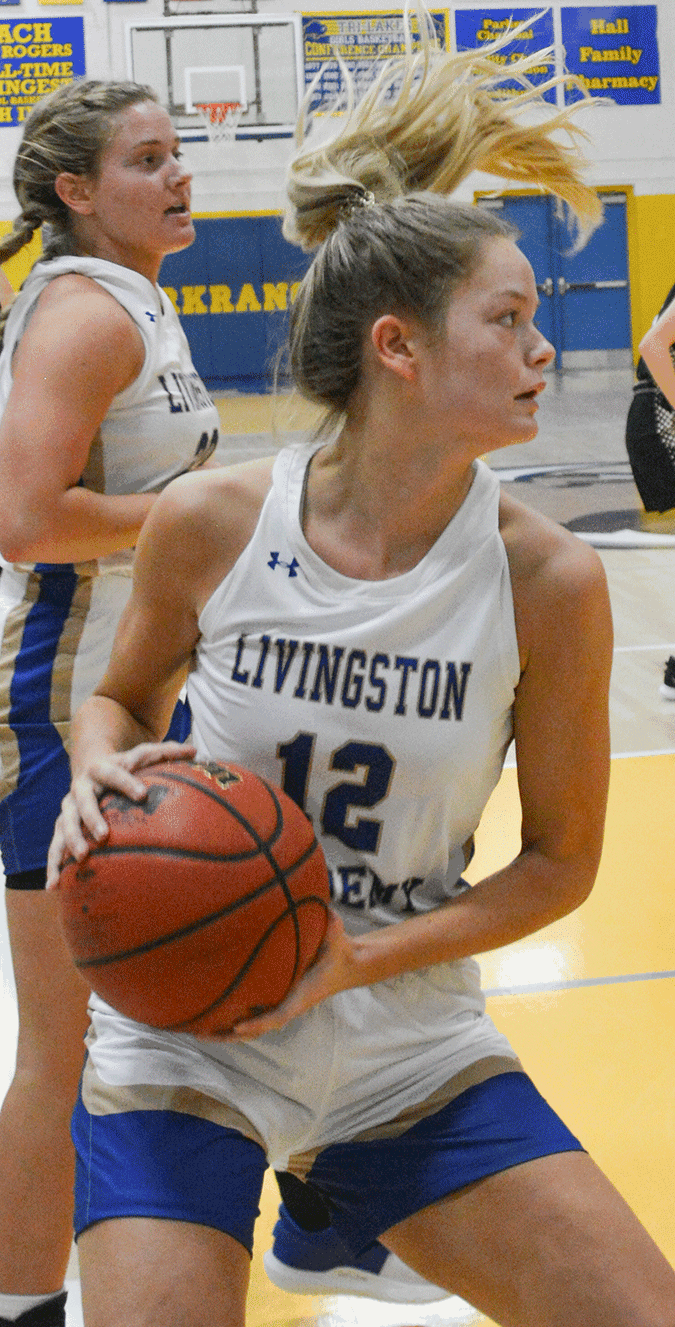 Aleah Melton looks for a teammate in last week’s action.

Aleah Melton looks for a teammate in last week’s action.

Livingston Academy girls coach Lesley Riddle in the early play each season constantly mixes squads on the floor searching for combinations that work well together in various situations. Sometimes it takes half a season, but not this season.

“We have players that can mix with any other players,” the coach pointed out after winning all three early season games. “It’s been a long time since we’ve had this depth, and it’s really fun to coach this. If one player or several players are struggling on the floor, make the change. I’m real pleased with what we’ve done so far, but the younger players are still a little nervous, but that will go away.”

And Riddle has never taken on weaker teams in early season play just to post a winning record. She takes on the best she can find and uses the experience to let her and her players know their strengths and weaknesses.

“I’ve never felt like you accomplished much by playing weak teams early,” the veteran coach added. “Losses don’t count until the district schedule starts, so get your best by playing the best.”

For their first game of the 2021-22 season, Livingston traveled to Nashville Tuesday night, Nov. 9, to take on a tough Lipscomb team and took a hard fought 41-36 win. It was a close game all the way with the Lady Cats outscoring the home team 7-5 in the final quarter to take the 5-point win.

“That was a good win,” Riddle explained. “Lipscomb is a good team, they will win a lot of games this year. I thought we played hard all night, especially for a first game, and down the stretch, we wanted the win and we got it. It was a very good win.”

On Saturday, the Lady Cats traveled to Clarkrange for the annual Hall of Fame Day and came away with a hard fought, but convincing, 67-40 win over Smith County, then came back in the nightcap and smashed North Greene 71-31.

“Both of the games Saturday were good for us,” sophomore Mallie Coleman explained. “It didn’t’ matter who was in, we were just as strong. There’s depth on this team, and we’re happy with whoever is on the floor.

“Smith County was a pretty good test and they were physical and shot the ball well, I thought, but if you remember, we pulled away in the second half and that’s because we used so many players, we just wore them down. My thumb is still sore and I favor it, although I try not to, but it will get okay over time. Can’t wait for the next game. “

In the day’s second outing for the Lady Cats, Livingston put its 2-0 record on the line against North Greene and waltzed to an easy 71-31 win.

“That was a little easier,” Butler pointed out. “We really got a chance to put our depth to use and we just played well, regardless who was on the floor. For me, both games today were really fun. The high school game is so much faster than what you are used to in middle school, but I’m getting the hang of it and really having fun.”

Comparing all three games, coach Riddle was pleased with the play of her squad and recognized where there was room for improvement.

“You know coaches are never satisfied, but I was pleased with the progress, especially with our younger players who will be so important to our success this season,” the coach stated. “I thought our four seniors, Keaton (Webb), Alexis (Phipps), Allie (Qualls), and Leah Kate (Clark) played like veteran players. Aleah (Melton) is a junior, but she had good spots and weak spots, but she’s good enough overall that she’ll work everything out.

“I thought (Lilly) Bates really showed improvement from last year and is really catching on to playing tough inside. Halle (Ledbetter) had the best game of her career in the first game Saturday, and that’s real good news for us, and Keely Mullins has the size and talent to improve every game,” the coach added.

“Every player we put on the floor played well I thought. The more playing time they get, the better we’ll get overall, and the good news is, we have enough depth that no one player can get complacent because they know there’s somebody on the bench that can easily take their place. And on top of all that, they all like each other, pull for each other, and they all want to win.”