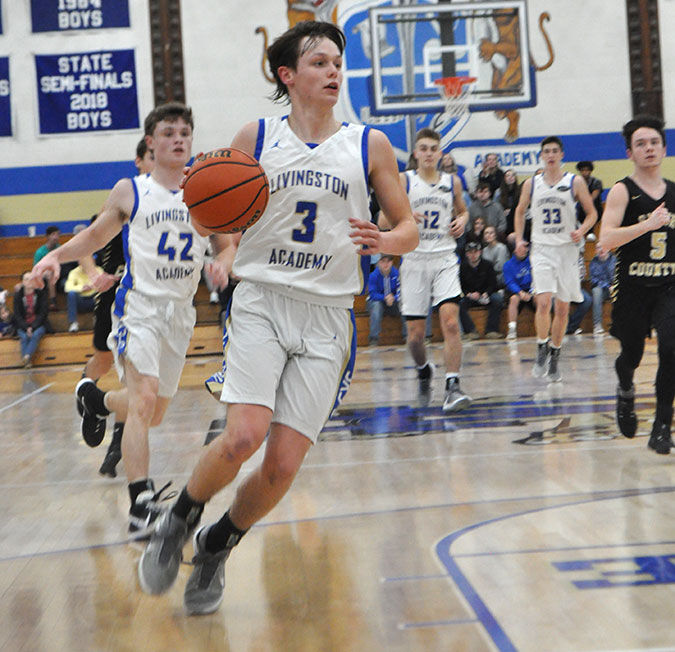 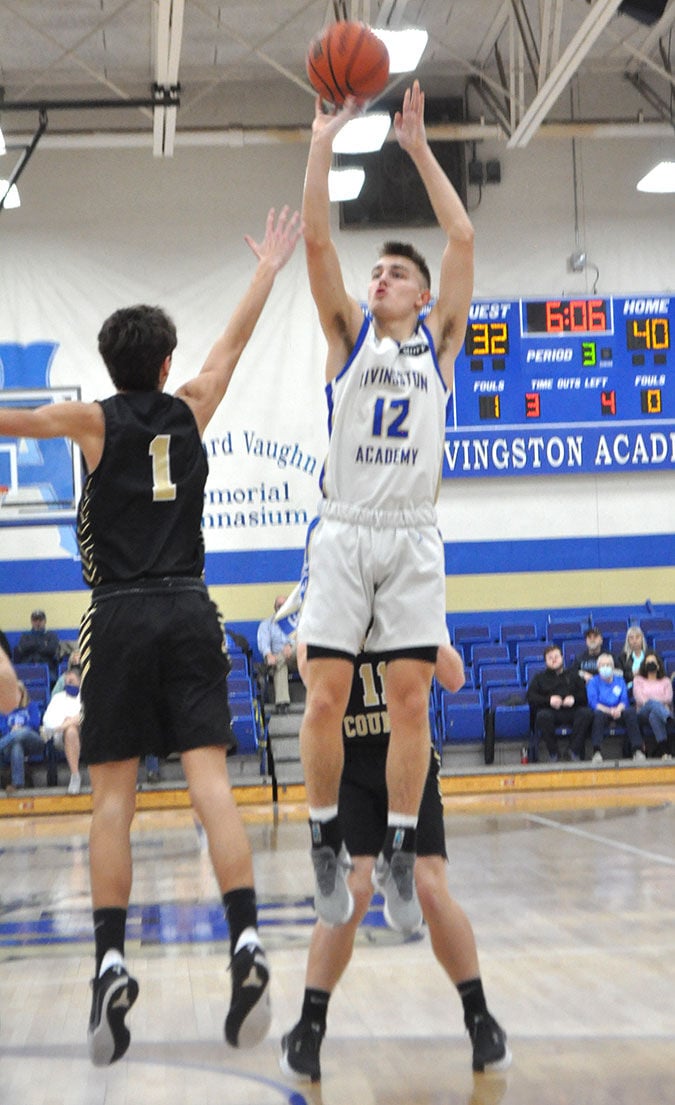 Matthew Sells goes up for 2 of his team-leading 24 points.

Matthew Sells goes up for 2 of his team-leading 24 points.

“That was as good a team effort as we have played all season, and we couldn’t have picked a better time to do it. Once we got rolling, that was really fun, and I know every player on this team really had fun tonight.”

Livingston Academy assistant boys coach Nate Kennard was actually having trouble finding the right words at the right time to describe the Wildcats’ performance in the second round of the District 8-AA tournament that was played Monday night at the LA gym. Kennard wanted to get everything in and wanted to be sure not to leave a thing out.

“We played outstanding ‘team’ ball tonight,” he continued. “Every player on that floor tonight, from the starters to the players that come off the bench played team ball, and when you do that, you see what the results can be.”

Smith County, a team the Wildcats beat twice in the regular season, finished the regular season in 7th place and had to defeat Cannon County on Sunday to move to the second round and a meeting with Livingston. The Owls were 4-10 in district play this year, but despite that record, always presented the Wildcats with a severe challenge.

In the two previous encounters, LA won the first by a mere three-pointer in a nail-biter, 59-56, then took the second contest 58-45. Neither game was easy, and that caused the LA coaches concern.

“I don’t care what your record is in this district, any team can beat any other team on a given night,” head coach Jimmy Miller explained, “and this game is one you don’t want to lose. Lose this one and your season is over, and we’re not ready to pack our bags quite yet.”

What the Wildcats would do would make life easier for Miller, Kennard, and Zac Craig as they used the school’s all time leading boys scorer, Matthew Sells, to set an early pace, hold a slight lead at the end of the first quarter, then move away at the half and completely dominate the final two quarters for a solid 80-46 win and move on to tonight’s challenge at York and a definite spot in the regional tournament next week.

The Owls jumped out to a quick 8-2 lead, but then Sells hit five straight points, Nick Choate added a basket from the lane, Sells hit a field goal, and Isaac Story finished off the quarter with a three-pointer and a field goal, and Livingston was up by 2, 18-16.

“Once I started scoring a little, I think the others just fell in and kept things going,” Sells explained. “Somebody has to break the ice, and I guess it was me in the first quarter.”

Story was the “big story” in the second quarter, reeling off seven points in a row and pushing the Wildcats out to a 35-27 halftime lead. From that point on, it was all downhill.

“We really got to playing good team ball in the second half, and that just put it out of their (Smith County) reach,” Eli Melton explained. “There was a time when it was more fun to make a steal and passing it to a player who would score than it was to score yourself. It was really good team ball.”

Melton was a critical part of the second half as he was credited with 5 steals and three big rebounds as he and his teammates took complete control and took a commanding 62-39 lead to the final eight minutes.

“That’s the way you want to play all the time,” senior Nate Carwile explained. “We did just about everything right and it caused them to make a lot of mistakes. It was a fun game to be a part of.”

In the fourth quarter, it was just a matter of getting through the final 8 minutes as quickly as possible. Livingston outscored the visitors 18-8 and Miller got to clear his bench and got every player in a uniform a chance to get on the floor.

“We’ve got a tough game tomorrow night at York,” Miller explained, “but I don’t want to think about that game yet. Take ‘em one game at a time. We don’t have much time to enjoy this one, but winning tonight gives us three more games, and that’s the good news. I thought this entire team did outstanding. We passed the ball well, took good shots, and played outstanding defense. That’s about all you can ask for.”

Livingston will be in Jamestown tonight, Tuesday, Feb. 23, for a 7 p.m. game in hopes of advancing to the district finals.