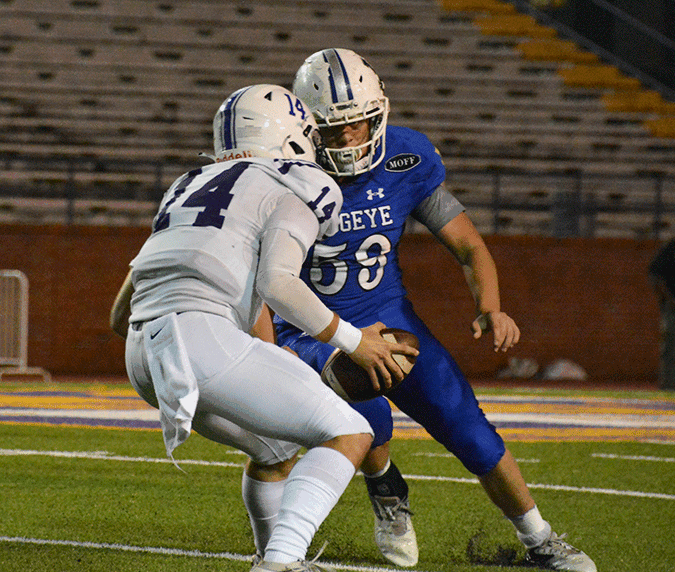 Livingston Academy’s Colin Weitzel, #59, bears down on the Watertown ballcarrier. 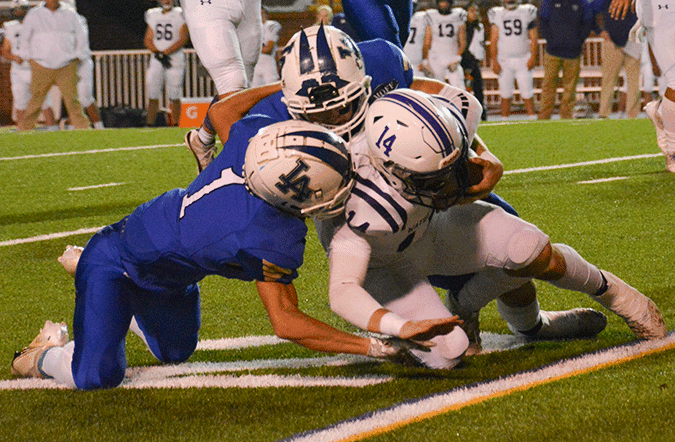 LA’s Carson Parrott, #1, and Xander Cantrell, #8, combine to put a stop to a Watertown run in last week’s game.

Livingston Academy’s Colin Weitzel, #59, bears down on the Watertown ballcarrier.

LA’s Carson Parrott, #1, and Xander Cantrell, #8, combine to put a stop to a Watertown run in last week’s game.

It was common knowledge long before this season started that the Livingston Academy Wildcats would struggle. After graduating 17 seniors from the previous team, the Cats were left with only three seniors with playing experience, a fist full of juniors, and two “truck loads” of sophomores and freshmen.

To use the word “rebuild” would be putting it far too simple.

And to add to the youth and inexperience problems, there was the fact that all of the games would be played “on the road” since the current stadium was found unsafe. That eliminated the “home field advantage” for at least half the schedule.

Being in a new region added more problems for the young team, not to mention a complete new coaching staff that would have to adjust.

And if those problems weren’t enough to forecast a very long season, now with only one game remaining in what has been a winless adventure to this point, is the fact that five of Livingston’s opponents this season are headed for the playoffs.

“We knew most of the problems we faced before the season started,” new head coach Dale Flatt admitted, “but we didn’t know just how strong our schedule would be. It turned out to be extremely strong and we just haven’t had the experience to match up. I will say that despite not having won a game so far, our kids have worked hard, never gotten down on themselves, have enjoyed being on a team and have had fun. And, we’ve not had many serious injuries.”

Livingston’s losing ways continued last Thursday night at Senior Night when the Cats hosted Watertown, a team they had not played since 1988. In a series that started way back in 1939, the two teams have faced off 18 times with the Purple Tigers winning 13 and LA 5. Watertown added the 14th in convincing style, rolling to a 37-0 shutout. It marked the fifth time this season the Wildcats have failed to put points on the board and also the sixth time this season that the “continuous clock” has shortened the total playing time.

Watertown entered the game with a somewhat deceiving 5-3 record. The three losses had been by a total of 9 points and to three playoff bound teams. When play started, it was apparent the offensive and defensive attack would be superior.

Livingston won the toss, the only thing the Wildcats would win all night, and deferred to the second half, giving the visitors the ball to start the game. It took only six plays for the Purple Tigers to march 73 yards for the initial score. A 2-yard plunge and a kick for PAT was good for a 7-0 lead.

On Livingston’s first possession, quarterback Brodey Coffee had his first pass intercepted, but the LA defense held and got the ball back three plays later. Coffee, Xander Cantrell, and Lochlan Hammock teamed up to move the ball forward, but ran out of gas and punted late in the initial frame. With only seconds remaining in the quarter, Watertown capped a 68-yard drive with a fine 32-yard touchdown pass. Going to the second period, the Wildcats were down only 14 points and still very much in the game.

Then, like several times already this season, the roof fell in, and by halftime, the game was out of reach.

Watertown touched the ball four times in the second quarter and scored all four times, three with touchdowns and a fourth on a 25-yard field goal.

It started with a 29-yard touchdown pass followed by the field goal, then a 3-play drive that used a 34-yard run followed by a 22-yard blast. Adam Cooper scored his third TD of the game with a little over 2 minutes remaining in the half to post the 37-0 lead and start the continuous clock when the second half got underway.

Regardless what Watertown tried, Livingston didn’t have an answer. In the first half, the visitors put 156 ground yards on the record and 134 yards through the air while the Wildcats posted a total of 24 yards of offense.

At the outset of the second half, it appeared the Wildcats had made some adjustments and found a few weaknesses in the Watertown defense, but it turned out that the visitors had taken out their first string and were using a new offense and defense altogether.

Hammock rambled off 11 yards on the first play of the third frame, and Coffee picked up seven more. Seth Smith got in on the action and moved the ball on the next play. and a 9-yard pass from Coffee to Carson Parrott had the Cats rolling. Runs of 6, 5, 9, 7, 4, 3, and 1 moved the ball to the Watertown 6 before the drive stalled and proved to be Livingston’s high water mark for the night.

On the night, Watertown would roll up a total of 353 total yards of offense to Livingston’s 60. Hammock would lead LA with 29 hard yards on the ground, and Coffee would add 22 through the air. Defensively, Cantrell, Nathan Cowgill, Jaden Lawrence, Daryon Hoover, Gage Hoffman, Will Brown, and Nathan Hargis headed the defense.

This week will mark the end of the season, and it comes at Baxter, where the Bees are currently leading the region with a perfect 5-0 record.

“It will be another test for us,” coach Flatt concluded, “but be assured, we’ll be there. It’s been a long season, but I really think the players have enjoyed playing, being a part of a team, and we will be better for the experience, and look forward to the start of next season.”