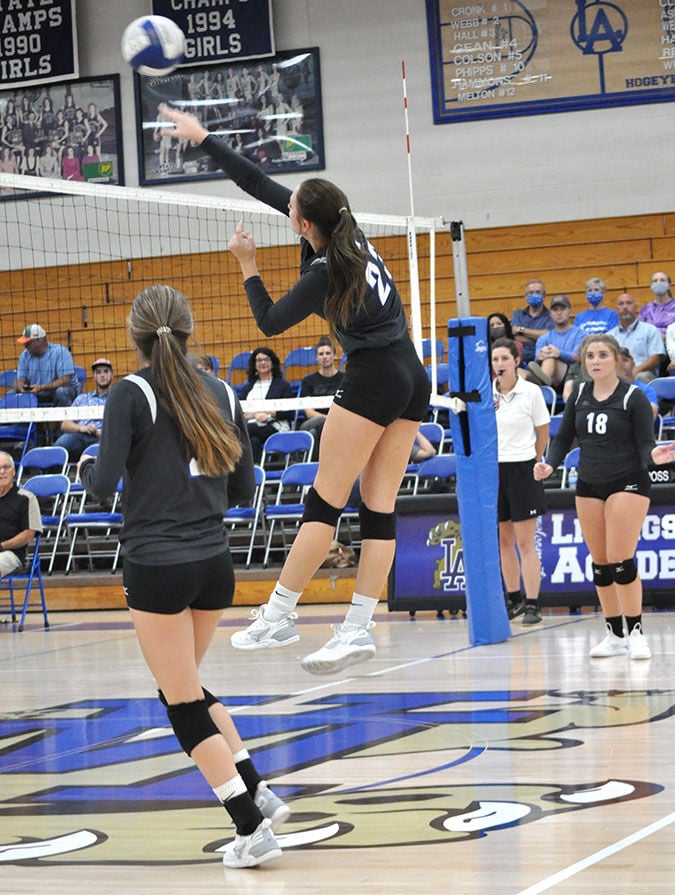 LA’s Elly Naff, #23, returns an Upperman shot at the net. 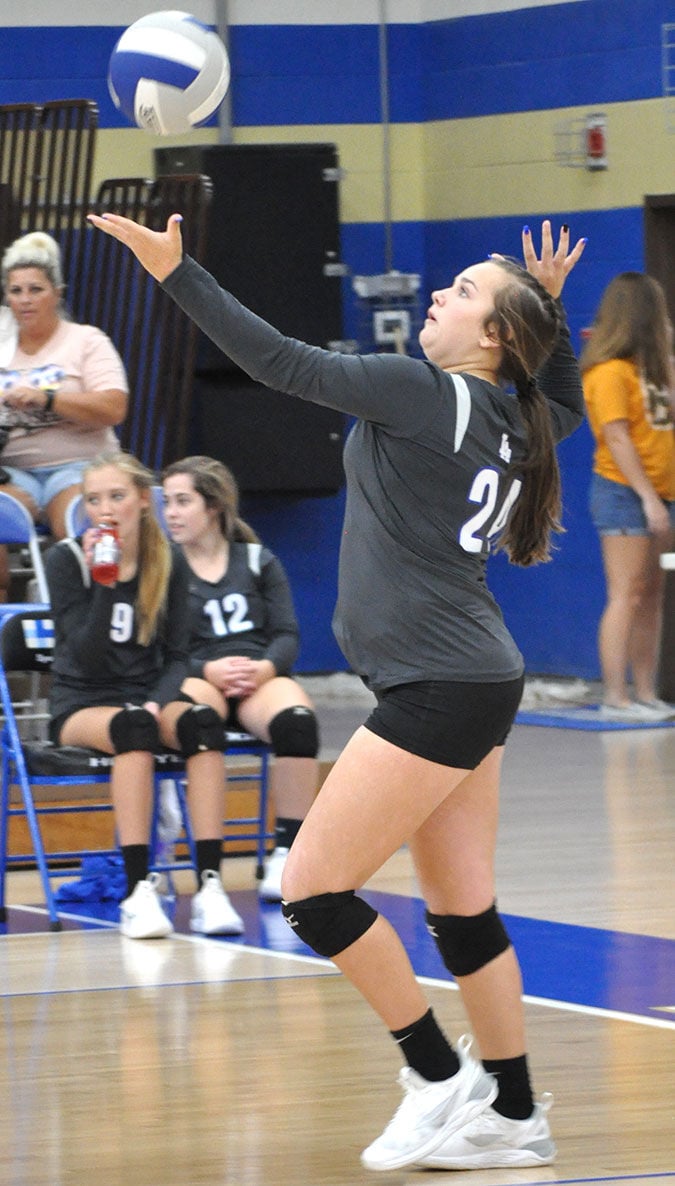 LA’s Addie Brown serves during match with Smith County. She had a good run of five straight points while serving in one of the three games.

LA’s Elly Naff, #23, returns an Upperman shot at the net.

LA’s Addie Brown serves during match with Smith County. She had a good run of five straight points while serving in one of the three games.

When the fourth game appeared to be on the line against Upperman last Thursday night, Addie Brown took to the serving line and made four straight shots that turned into Livingston points and pushed the Lady Wildcats to a perfect 10-0 record on the season.

“I admit I was a little nervous,” Brown confessed after she and her teammates rolled to a 3-1 win over the Lady Bees, “so I just took a deep breath, focused on the shot, and hit it. That helped, plus I know my teammates will take care of the rest. I just have to get it over the net.”

When it was Browns’ turn to serve late in the fourth game, the pressure was not so much on winning, it was to nail down the fourth game and take the match against a good Upperman team.

“At that point, I was pretty sure we were going to win,” Brown added. “I think we were ahead by a pretty good margin (21-6), but I wanted to get the game over with. Thankfully, I got my serves over the net, Jordan (Key) got one point on a tip-over, and Aleah (Melton) slammed home several others and that final one for the win.

“This is a good team and a fun team to play with. We all enjoy it and we’re getting better every game. Today, we made some mistakes and Upperman played tough, but in the end, we did what we started out to do – win.”

For Livingston, it was the big event of the week that saw the Lady Cats take on three opponents and come away with three wins, each in convincing style.

On Monday, Smith County came to Livingston Academy sporting a 1-7 overall record and 0-5 in District 8-AA competition. On the other hand, when the match started, Livingston was 7-0 overall and 3-0 in the district.

The first game was never close as the Lady Cats jumped out to a 6-3 early lead and won going away, 25-8.

Sydney Morfitt started the game serving for LA and rolled up three straight points to get things in motion. At that point, the game saw the visitors trickle back and close the gap to one at 5-4. Elly Naff then took the serve and with strong front line play from Melton, Keaton Webb, and Abby Ray, the Lady Cats took over, rolled out to a 14-7 lead and never looked back although the Lady Owls would put 14 points on the boards. In the game, Key would also have a good run at serving and Livingston would win the game 25-14.

In the final game, Abby Reeder showed some good play on the front line, and with Brown having a good series at serving and Ray getting several shots to fall near the out of bounds line, it was another easy win for LA, 25-8.

“I try to look for a spot on the other side of the net where I think I might get a shot in just from how the other team is moving,” Melton later pointed out. “You can’t always do that, but if I can just focus on that, it may turn into easy points. Other times, you just hit it where you think it will score at the time.”

On the Saturday before the busy week, the team traveled to Gatlinburg to get some strong competition.

“It was a good learning lesson for us,” sophomore Webb pointed out. “It was good for us to go over there, face some really strong teams and hopefully learn where we need to improve.”

Apparently the lesson paid off, and after returning, Livingston rolled over Smith, then trimmed Cumberland on the road, 25-20, 25-23, 25-13.

“Cumberland was a good opponent,” LA coach Christie Jenkins explained. “They fought us hard all night and I think they forced us into some mistakes we don’t normally make. That and the trip to Gatlinburg have been good for us, I think.”

By the time Friday rolled around, Livingston was ready for rival Upperman.

The Lady Bees just wouldn’t go away as time and time again they would take a slim lead only to see the Lady Cats come back. Down the stretch with the score as close as 22-20, Melton came through with several big points at the net and a 25-22 LA win.

In the second game, it was again a close battle all the way, but LA carved out another hard win, 25-20. Things didn’t go well at all in the third game and the visitors feasted on Lady Cat mistakes to win the game 25-21.

“We didn’t play well at all in that game,” Jenkins explained, “too many big mistakes at just about every point on the floor. The good news was, we saw where we went wrong and fixed it quite well in the fourth game.”

Livingston would leave no doubt which was the better team as they strolled to a dominating 25-7 win to take the match, 3-1.

“That was much better,” the coach added after the game. “We still need to work hard on some points, and next week (this week), we play Stone in a match that will probably determine the district champion, plus Cumberland. Both games are at home, and that’s good because our home crowd has really been good for us this season.”

In the last week of the regular season, LA will host Cumberland County on Tueday and Stone on Thursday.