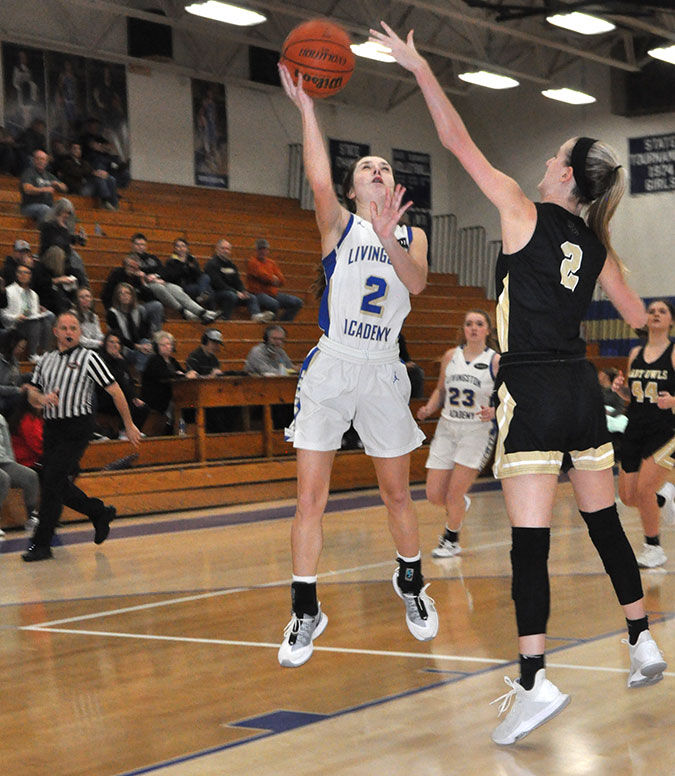 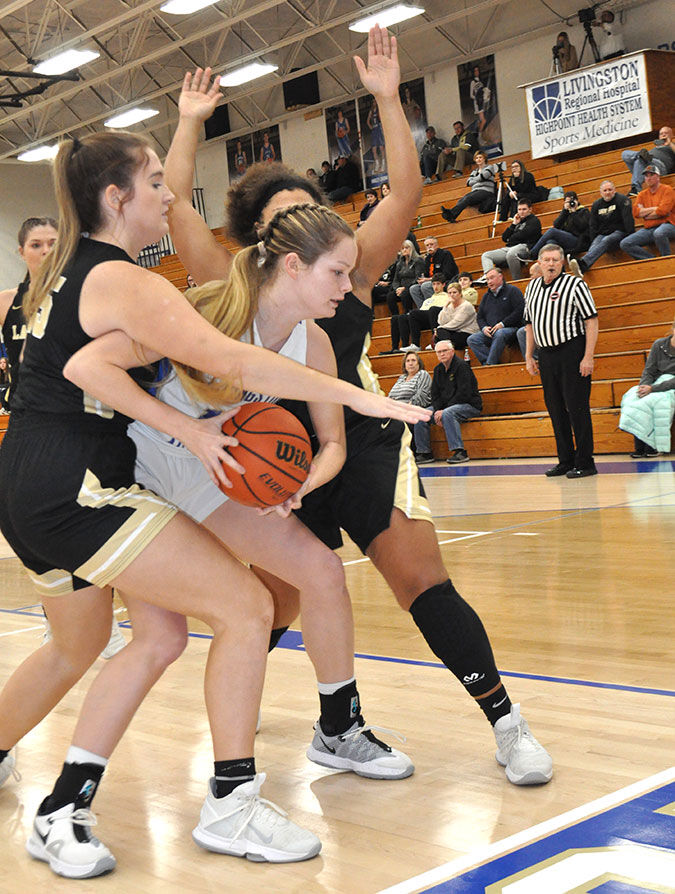 Aleah Melton pulls in a rebound and fights her way out against Smith County last Friday. 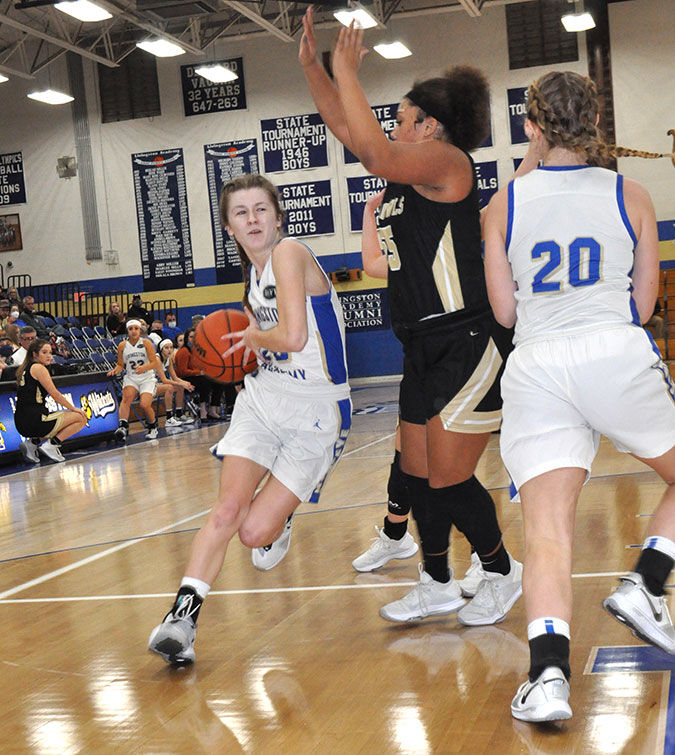 Livingston Academy’s Allie Qualls drives her way inside for points against Smith County.

Aleah Melton pulls in a rebound and fights her way out against Smith County last Friday.

Livingston Academy’s Allie Qualls drives her way inside for points against Smith County.

Any young team of ball players, regardless of the game, wouldn’t hesitate to jump at playing five games in a week, not giving a second thought to being tired or completely worn out.

So the Livingston Academy girls couldn’t wait Monday night, Jan. 25 to jump into a schedule that was mostly making up games that had been postponed due to the current COVID-19 pandemic.

When it was all over Saturday afternoon 60 miles away from home at Cannon County, there was not a single player not ready for some well deserved rest. As a matter of fact, most confessed to being tired on Thursday night after a hard fought game at Macon County.

“I know I’m worn out,” junior Keaton Webb confessed after the game with the Tigers on the road.

“Me too,” added Allie Qualls, “and we’ve got two more to play this week, get off a day (Sunday), and go right back at it Monday and Tuesday I think, next week. This definitely has been a strange season.”

Having to work so hard, including going to school, homework, and playing basketball, was the down side of the story, but the bright side was the Lady Cats posted four wins in those five games and felt like they left one on the floor at Macon County on Thursday night. With the five district victories, Livingston moved its record to 4-3 in the district and a respectable 12-6 overall with no less than six games remaining in the regular season. All six are district contests.

“They’re tired,” LA head coach Lesley Riddle pointed out, describing her team after Friday’s game at home, the first home game in the last seven outings. “But they have played hard, done well, and we’re on a good run. Despite all the changes and everything else going on, we’ve put ourselves in a position to finish high in the regular season and get a good spot in the district tournament. That’s important.”

Livingston started out the five-game stretch winning at Watertown on Monday night 51-45 in a make-up game. On Tuesday, the Lady Cats traveled to DeKalb County and put up an impressive 71-37 win. Wednesday was a day off, then the marathon continued at Macon County on Thursday where the Lady Cats suffered their only loss in the stretch, 45-37.

In that game, the home court advantage for the Lady Tigers paid off early as they came out and shot the lights out of the gym in the first four minutes, taking a quick 13-0 lead on three straight three-pointers, added two more in the quarter, and were in command 21-10 after the first period.

“That was a shock to us,” Webb said after the game. “After that, we settled in, played our game, and actually could have tied it and won it in the fourth. We’ll look for them when they come to our place.”

“Macon County probably could have won the state championship last year had it not been for the virus, and I think we were just a little intimidated at the start,” Coach Riddle added, “but once we settled in, we figured out we were as good or better than they were.”

Aleah Melton was a little down on herself after the loss, but the LA outstanding sophomore got her game back together in the very next contest, She would blister the nets for 18 points and her rebounding was one of the highlights of the Livingston attack.

“That made me feel a lot better,” Melton confessed in her quiet way. “That was much better and I feel better about my play. It takes all of us to make it work, and I want to put in my share.”

On the week, not counting the first game at Watertown, Melton scored 54 points, leading the Lady Cats’ offense. She also led in rebounds.

For the four games after Watertown, Webb followed Melton with 47 total points, Hailey Cronk had 25, Halle Ledbetter put up 19, Hannah Westmoreland was a constant outside threat and had 16 points. Qualls dropped in 13 markers, senior Abby Reeder was good for 12, senior Kaylee Asberry added 11, Alexis Phipps had 9, Jaylee Hall and freshman Lilly Bates each added 2.

When the team showed up at Cannon County on Saturday, after defeating Smith County on Friday, the main thought was “let’s get in there, win this game and go home. It’s a district game and we need to keep winning.”

And that’s just what the Lady Cats did.

With Melton on track, Livingston roared out front of the Lady Lions 15-10 in the first quarter on baskets by Melton (2), Cronk, Qualls (2), and a three-pointer by Westmoreland and Ledbetter.

Defense took over in the second quarter as LA allowed the home team only 2 points in the period while adding 17. From that point on, it was a good chance for the younger players to get on the floor, which Riddle did and to post a fourth district win.

“We lost our first two to Upperman, and that’s no disgrace,” Cronk explained. “Now we feel like we can beat anybody with the way we’re playing, so we’re going to hang on with this tough adjusted schedule and give our best to finishing second heading to the tournament.”

“It’s a shame we lost to Macon,” Ledbetter said. “It’s hard to overcome a start like they had, but looking back, I think we all think we will win when they come to our place. We’re looking forward to that.”

This week, Livingston will host Macon tonight, Tuesday, Feb. 2, then host York on Wednesday, Watertown for Homecoming on Friday, and DeKalb on Saturday. The final two games of the season will take place next week with the Lady Cats traveling to York on Tuesday and coming home for Senior Night on Thursday against Cannon County.