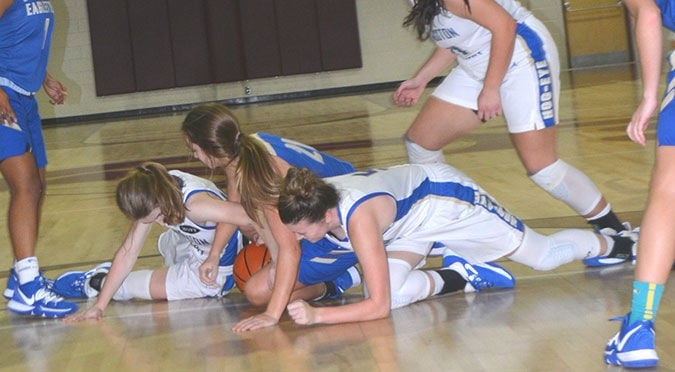 A loose ball draws players from both teams to the floor to get it in the Livingston-Shelbyville game in Woodbury last weekend. 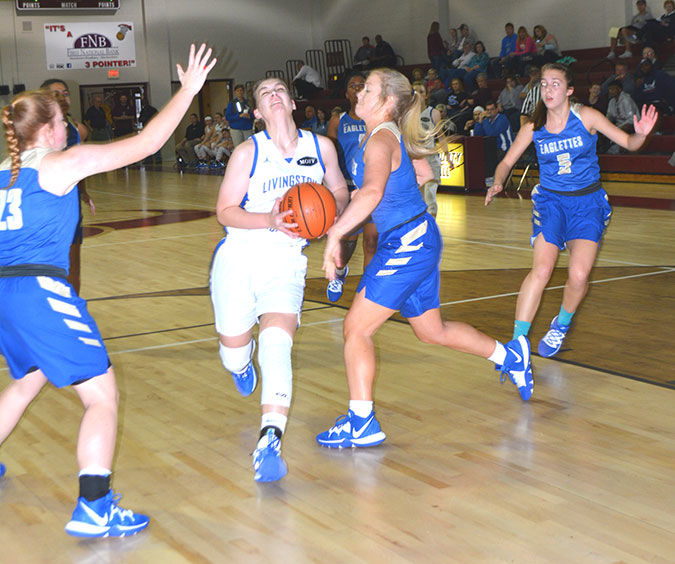 Hailey Cronk drives the lane for a pair of points in weekend action. 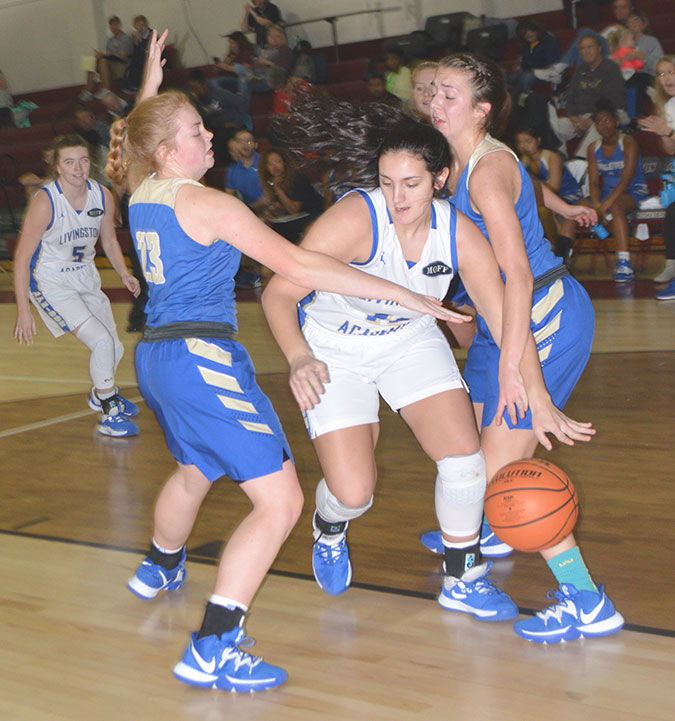 LA’s Hannah Hammons is trapped between two Shelbyville defenders during action over the weekend at the Cannon County Thanksgiving Classic.

A loose ball draws players from both teams to the floor to get it in the Livingston-Shelbyville game in Woodbury last weekend.

Hailey Cronk drives the lane for a pair of points in weekend action.

LA’s Hannah Hammons is trapped between two Shelbyville defenders during action over the weekend at the Cannon County Thanksgiving Classic.

There was a time, not so long ago, that when the Shelbyville girls showed up on a schedule, it was in order to mark an “L” beside that game and move on. For years, losing to the Lady Eagles was not a shame, just a forgone conclusion. There are 10 state championship banners hanging on their gym wall.

But like most programs, the cycle swings around and what once was is no longer and Shelbyville is no exception. In recent years, the Eaglettes have suffered and taken their share of losses. They brought a not so impressive 0-3 record into Saturday’s second round game of the Cannon County Thanksgiving Classic against the Livingston Academy Lady Wildcats, who on the previous day posted a strong 74-57 win over Huntland.

“That was a very good win for us, “LA head coach Lesley Riddle would point out early Saturday before the Shelbyville contest. “I thought we showed a lot of maturity, we played very good together, and we kept the pressure on throughout the entire game. We’re moving in the right direction. We’re still young, but yesterday, I was pleased to see our seniors (Suzanna Hayes, Hannah Hammons, Anna Beth Colson, and Emily Gean) step up and show a lot of leadership.”

Twenty four hours later, Riddle was not so happy with her team that had led the entire game until the fourth quarter and dropped a 55-50 contest to Shelbyville. It was a game LA should have and could have won.

“We gave that one away,” a disappointed Riddle commented after the game. “We could have won the game at the free throw line, but we were miserable there. Late in the game we just stopped scoring. We led all night, then just gave it away there in the fourth quarter.”

Riddle had reason for her disappointment. After the win over Huntland and a hard fought setback at Pickett County, 55-52, earlier in the week, things were looking good this early in the season for the young Lady Cats.

Against Shelbyville, Livingston led by nine, 44-35, going into the final eight minutes, but scored only six points during that span while the Eaglettes poured in 20 for the come-from-behind win.

Keaton Webb got the Lady Cats started with a pair of free throws, and Aleah Melton lit up the floor with two consecutive three-pointers from the top of the key. Melton would add a field goal later for eight points in the quarter and a 17-11 LA lead.

In the second quarter, Gean had the hot hand with a couple three-pointers, and at intermission, Livingston was on top 35-24 and appeared headed for a win. In the first half, LA controlled the boards and had the hot shooting hand.

Even in the third frame, the Lady Cats were still rolling with Hayes and Gean doing the scoring damage and carried the nine-point lead to the final quarter.

And that’s where it ended. In the final eight minutes, Melton had a field goal, Hayes added another and Webb a third for six points. At the foul line, the impressive number was zero, and for the entire game it was 7 for 17.

Melton led the scoring with 17 points and Gean added 14. Hailey Cronk added 5, including a three-pointer,Hayes had 7 and Alexis Phipps added 3.

In Friday’s game, the Lady Cats showed a well-balanced attack with eight players making points and a total of 12 hitting the floor for good playing time against Huntland, a school near the Alabama-Tennessee state line.

Livingston used a pair of three-pointers, one by Melton and one by Webb, and good play from Hammons and Hayes to move out to a 22-14 lead at the end of the first quarter. Gean and Webb got things rolling in the second with three-pointers, and then Melton added six points and Webb hit a second three for a 41-32 halftime lead.

Hayes really had the hot hand in the fourth frame, scoring 10 points and sealing the victory. Abby Reeder and Jaylee Hall each got in on the scoring late in the game.

It’s been at least five years since the Livingston girls have beaten Pickett County, and it may have been even longer than that, but nothing changed last Tuesday night when the Lady Bobcats hosted the LA girls and came away with a thrilling 55-52 win.

One thing did change in that this time it was as tough as it ever has been for Pickett to take the win. Livingston led 12-7 at the end of the first frame and was still on top at the half, 23-20. A Pickett County three-pointers in the third frame gave the Lady Bobcats their first lead of the night, 26-23, but a three by Cronk seconds later tied the game at 28.

Pickett County led by one, 34-33, going to the final quarter, then had to fight hard for the three-point win.

Hammons led Livingston with 11 points, followed by 10 from Cronk. Webb and Colson each added 8, Hayes had 6, Qualls 5, Melton 3, and Phipps 1.

When the week ended, Livingston had dropped two of three games for an overall record of 2-4, but it could have been a week where the Lady Cats could have been 4-2. It was that close.