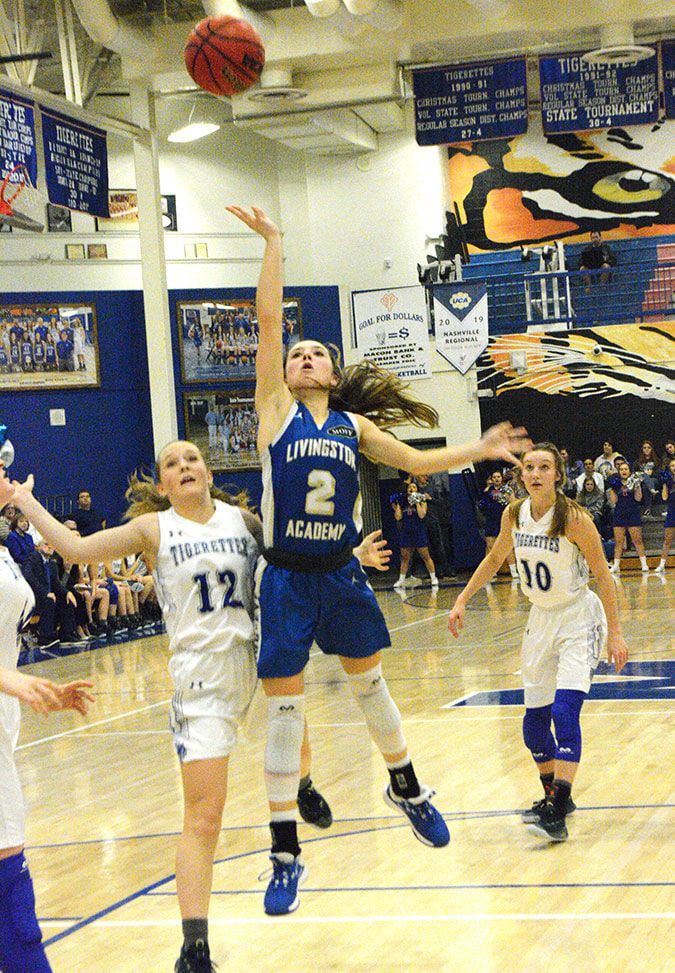 Keaton Webb keeps her eyes on the target as she drives the lane for a shot. 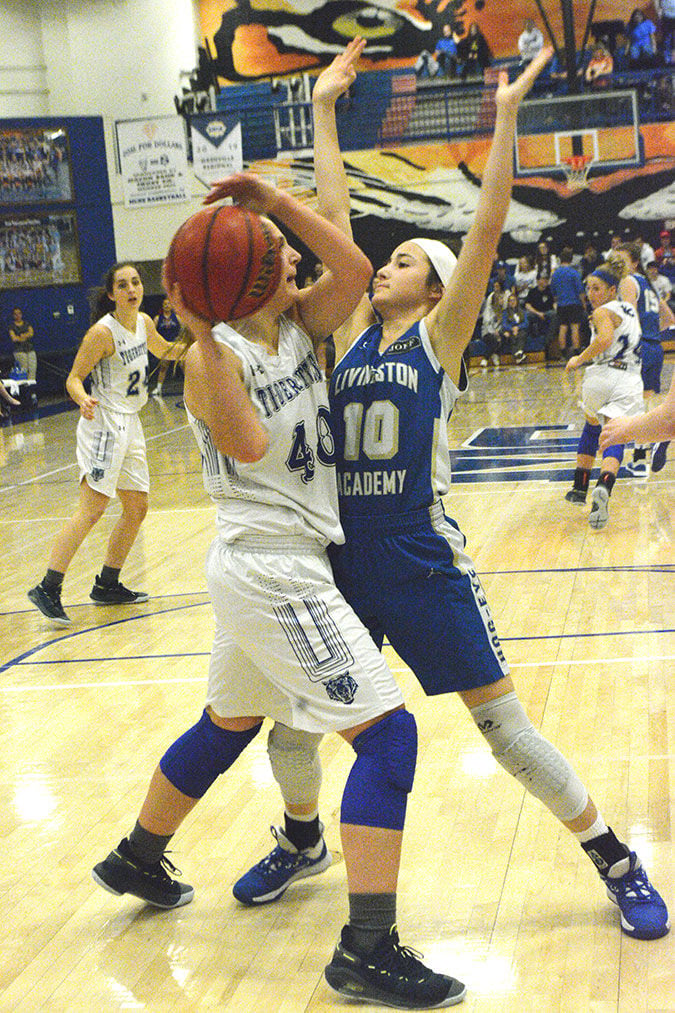 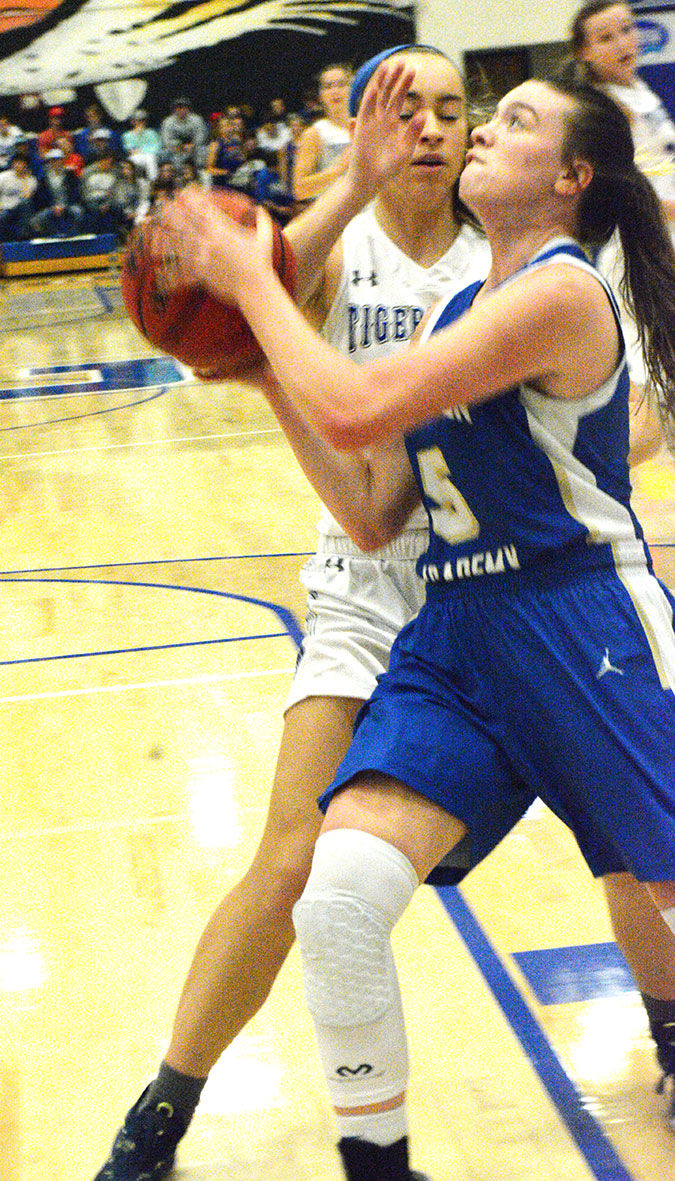 Keaton Webb keeps her eyes on the target as she drives the lane for a shot.

Last week had to be one of the strangest of the season for the Lady Wildcats of Livingston Academy. To get things started, they had to face the number one 2A girls team in the state in Macon County on the road, then three days later traveled to Watertown to face the Lady Purple Tigers, the 7th ranked team in District 8, 2A.

Surprisingly, the Lady Cats, currently 5th in the district standings, played very strong early against Macon then faded down the stretch to suffer a 65-46 defeat, and started extremely strong against Watertown, only to fade late in the game, but held on for a 50-43 decision.

At week’s end, Livingston sported a 14-13 overall mark and an even 6-6 record in the district.

“I thought we came extremely aggressive against Macon County,” LA head coach Lesley Riddle pointed out after the game, “and that’s what you have to do against them. They are so good. We stayed with them for a while, but when we made a mistake, they not only took advantage of that mistake, they added several more to it.

“We looked like we were about to catch them, then they would run off 7 or 8 unanswered points.”

“They made you pay dearly for a mistake,” senior Anna Beth Colson related. “They are that good and just when we thought we might be catching them, they would make a steal or force a turnover and they were gone. “

At Macon County on Tuesday, Aleah Melton got her Lady Cats off to a good start, scoring the first points of the game, then Colson would add 5 more and Keaton Webb would hit a three-pointer late to keep LA close, 14-10, at the end of the frame. A 9-0 Macon run midway through the period was a strong indication of just how powerful the Lady Tigers really were.

“That was the kind of a thing we really needed to try and avoid and we couldn’t,” Suzanna Hayes pointed out after the game. “For a while we stayed with them, but they were just too strong in just about every department. They shot well, were quick, picked up on mistakes, you name it, they did it.”

Hayes started the second quarter with a pair of free throws, then Macon went on a 7-0 run before a field goal by Webb stopped the charge. A basket by Allie Qualls and another by Melton late were only good to keep the spread from getting wider. At the half, Livingston trailed 37-20.

A pair of field goals by Melton started the second half, but with 5:30 remaining in the quarter, a three-pointer moved the Macon advantage to 20, 44-24, and it was now a matter of the final score.

Melton led the LA scoring with 12 points while Colson added 9. Webb had 36, Hailey Cronk and Bailey Allred each hit for 3, and Qualls, Hayes, Alexis Phipps, Leah Kate Clark, and Hallie Ledbetter each added 2.

Friday at Watertown, the story started out much the same as it did on Tuesday as the Lady Cats roared out of the gate with 19 first quarter points before cooling down to only 6 in the second period. Late in the game, the home town team would close the gap to 5, but the Lady Cats rallied on several occasions to finally post the win.

Melton got the Lady Cats off to a hot start with a three-pointer, Webb added a field goal, Cronk hit a pair of free throws as did Colson, Webb nailed a three, Colson scored on a drive up the middle, and before the horn sounded, Livingston was on top 19-4.

Then someone threw in a bucket of cold water and, added to the whistle happy officials, things quickly slowed down, and at the intermission, Watertown had recovered, scored 12 points in the second quarter, and trailed only by 9, 25-16, at the half.

Only 10 points separated the two teams going to the final quarter, and at one point, a three-pointer by Watertown cut the lead to 44-39. From then to the end, it was a steady parade to the foul line and Webb, Colson, and Cronk maintained the spread.

Webb’s 16 points led the way for Livingston with Colson in with 10, Cronk, 8, Melton and Hayes with 7 each, and Kaylee Asberry with 2. On the night, Livingston hit 24 of 34 free throws while Watertown had 12 of 19.

This is the final week of the regular season with Livingston returning home tonight, Tuesday, Jan. 11 to host York Institute on Senior Night, then LA will go to Cannon County on Thursday for the final game before the District 8, 2A tournament gets underway the following week at Watertown.