You are the owner of this article.
Edit Article Add New Article
You have permission to edit this article.
Edit
Welcome, Guest
News
Obituaries
Classifieds
e-Edition
Photos
Multimedia
Share the News
Advertise
About OCN
Search
1 of 3

LA’s new head coach Dale Flatt shows Wildcats linemen how to get in position to take on their opponents. 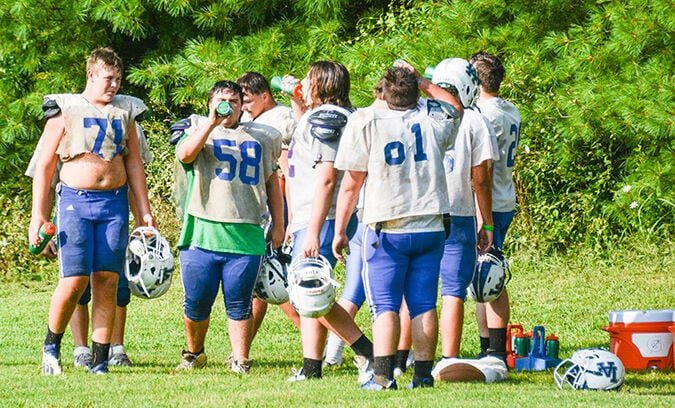 The helmets come off as practice stops for one of the many breaks necessary due to the high temperatures in early August. 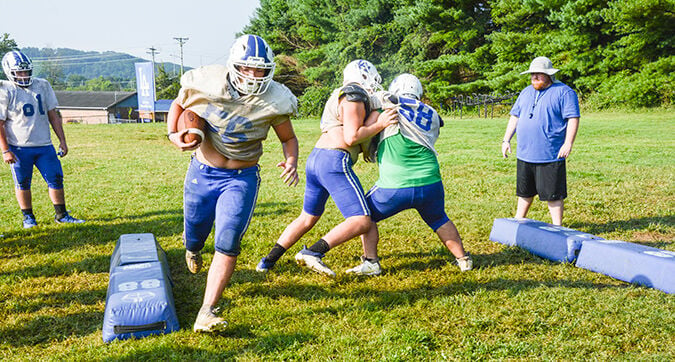 Assistant Coach Cody Muse watches as the offensive line runs through practice drills in preparation for the 2021 football season, which will be played “on the road” as all home games are not home at all.

LA’s new head coach Dale Flatt shows Wildcats linemen how to get in position to take on their opponents.

The helmets come off as practice stops for one of the many breaks necessary due to the high temperatures in early August.

Assistant Coach Cody Muse watches as the offensive line runs through practice drills in preparation for the 2021 football season, which will be played “on the road” as all home games are not home at all.

For at least five years now, Livingston Academy football players, coaches, and fans have been looking for something new, and this year, they are getting it. No, it’s not a new stadium that has been so sorely needed and anticipated, but it will be a totally new look just the same.

For the past 14 years, the Wildcats have been under the successful guidance of head coach Bruce Lamb and his fairly consistent coaching staff. Lamb stepped aside back in May and opened the door for a new “team”, and after a short but confusing selection event, former assistant Dale Flatt was asked by the school and school administration to consider the job and he hesitated only a second before accepting the challenge.

“I’ve coached here for almost 19 years,” the new coach pointed out, “and have always wanted to be head coach, but more importantly, I’ve just wanted to work with the game and the players. When they moved me to principal at Allons several years back, I had to give up working as an assistant football coach, and I really hated that. I loved Allons and the people there, but now I’m back on the sidelines and I’m really looking forward to the upcoming season.“

When Flatt became the new head coach, he also had to find some “new” assistants. Almost the entire staff under coach Lamb decided not to return, so that presented the new coach with his first real challenge.

“I’ve always known a head coach is only as good as his assistants,” Flatt explained, “so I had to find some new talent to make this thing work. I did get to keep coaches Noah King and Dylan Hayes from last year’s squad. We have added Cody Muse, a 10-year veteran from Scott County, Ivan Coil, a first-year coach from Florence, Alabama, freshman coach Dylan Ashlock to help with offense, and my son, Daniel, currently a med student in Kentucky, who played at LA several years back, playing numerous positions.”

Another big challenge facing the new coach is the fact that 22 players, 17 regulars, graduated off a team that made it to the first round of the state tournament last season.

One indication of just how young this year’s team is could be as simple as looking at the parking lot at the field house. For years, the lot has been completely full, but this year there are as few as 10 vehicles there every practice. As the new coach likes to laugh: “We’re so young, most of our players don’t have driver’s licenses.”

“There are a lot of new faces out here,” the coach stated, “and if you look at it in the right way, that’s not always bad. We get to teach them what we want them to learn, not what somebody else has done. Naturally, in most situations, you want a lot of veteran players returning, but we don’t have that, so we’ll do the best we can with the best of what we have. “

And that’s not all bad news.

Flatt admitted that this early in the pre-season, things have been a little confusing, so the learning process has had to be slow.

“We learned early we can’t throw a lot of things at them all at once. It has to be kinda slow, but the results are improving every day,” the coach continued.

Flatt is quick to point out that if he had to put a team on the field today, he already has most of the positions filled.

“Cowgill is an outstanding athlete and can run the ball, play linebacker, catch passes, he can play almost anywhere, so that’s why he isn’t the starting quarterback,” Flatt explained. “He did play quarterback some last year and can again this year, but right now, we can use him at other positions. “

At runningback, the Wildcats will feature two new faces, but two who have worked hard and have shown promise. Junior Locklin Hammock and sophomore Trey Coleman will move the ball on the ground, and offensive coach Coil has no doubt they can get the job done.

“Hammock sees the holes faster,” the coach explained, “but Coleman is the more powerful runner. Both will get the job done.”

“We feel good about this group,” coach Flatt continued. “As you can see, we lack some experience, and that usually always puts the offense behind the defense getting ready for a season, but as I’ve said, these youngsters want to learn and they want to win, so that should speed the process along much faster.”

Defensively, the Wildcats will have three down linemen in Smith, Dial, and Geist. Newcomer Daryon Hoover is also showing promise in any of those slots. Smith is a sophomore, as is Dial, while Geist is a junior.

Livingston will go with five players at linebacker, including, left to right, Cantrell, junior Camron Jackson, Cowgill Coleman, and Hammock. Ayden Coffee will see action at cornerback as will senior Jaden Lawrence. Lawrence could also see some action at linebacker. Kyle Blodgett will also see action in the backfield, and Brown will hold down the safety position.

Kickers for the Wildcats this fall will include Dylan Watson on kickoffs and extra-point attempts, with Lucas Roberts doing the punting.

“Of course, I’ve known coach Lamb for a long time, and worked with him for a long time, Flatt pointed out. “He has been so helpful in this transition and does all he can to help us adjust. I can’t say enough about how much he’s done every time I call.

“We’re excited about the season,” coach Flatt concluded. “It will be different in that we will be using much younger players than in recent years, and a lot about us will be new, but the one thing that is always consistent is, this is football and these young men want to play it better than they even think they can. That’s heading in the right direction.”

Livingston will play this season in Region 3 4A. Other teams in the district include Stone Memorial, Cumberland County, Macon County, and DeKalb County