You are the owner of this article.
Edit Article Add New Article
You have permission to edit this article.
Edit
Welcome, Guest
News
Obituaries
Classifieds
e-Edition
Photos
Multimedia
Share the News
Advertise
About OCN
1 of 4 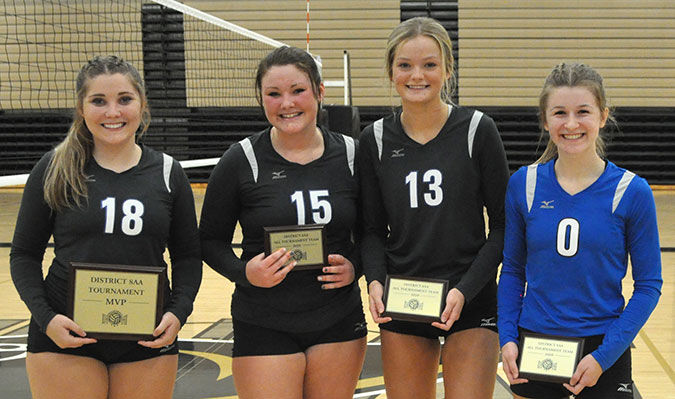 For Jordan Key, #18, Abby Ray, #15, Aleah Melton, #13, and Allie Qualls, #0, it was a big night. Key, Qualls and Keaton Webb, not pictured, were named to the All-District 8-AA regular season team. Melton was named District Most Valuable Player for the season. Melton, Qualls, and Ray earned spots on the All-District Tournament team, and Key took the Most Valuable Player award. 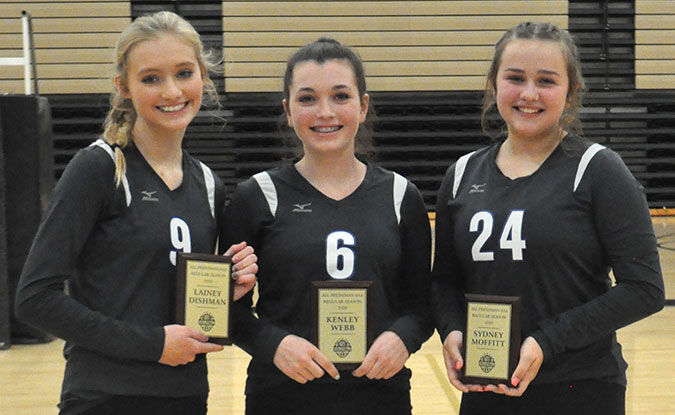 Named to the All-District Freshman team were, from left, Lainey Dishman, Kenley Webb, and Sydney Moffitt. 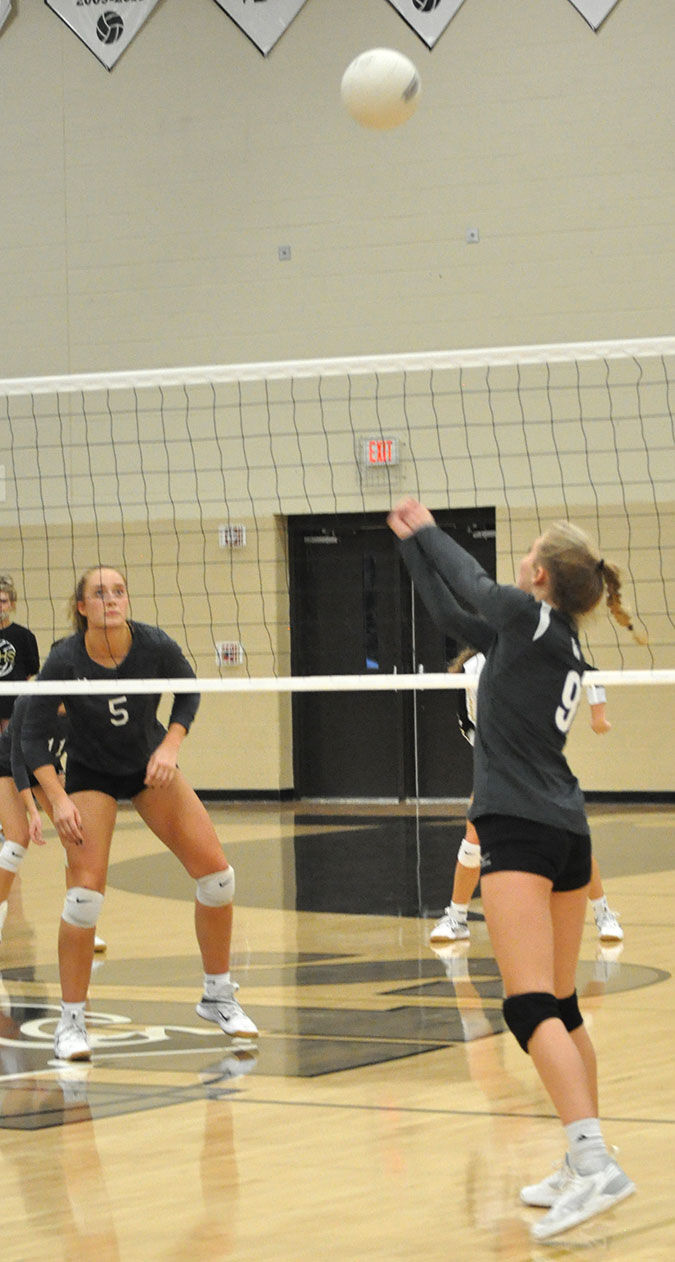 For Jordan Key, #18, Abby Ray, #15, Aleah Melton, #13, and Allie Qualls, #0, it was a big night. Key, Qualls and Keaton Webb, not pictured, were named to the All-District 8-AA regular season team. Melton was named District Most Valuable Player for the season. Melton, Qualls, and Ray earned spots on the All-District Tournament team, and Key took the Most Valuable Player award.

Named to the All-District Freshman team were, from left, Lainey Dishman, Kenley Webb, and Sydney Moffitt.

“It was not one of our better performances this year,” Livingston Academy volleyball standout Aleah Melton explained Monday night, “but it was a win, and that’s why we came here. We’ll take it.”

Indeed, Melton and her Lady Wildcats teammates, after breezing through District 8-AA competition all season with a perfect 12-0 record, one outside win then a first round district tournament victory at Stone Memorial High School Monday night over Cumberland County, did take the win, the district championship, and headed to the regional tournament with a perfect 15-0 record.

“We made some mistakes we normally would not have made, but it was a big game and we were trying really hard,” Melton added. “We really wanted the championship, and we got it. This has been a real fun season and we are still playing. That’s the big thing. We want to return to the state.”

Melton and her teammates did go to the state tournament last year after having to play all their home games at the gym at First Baptist Church due to damage to the gym floor at Livingston Academy. After taking the district title in 2019, Livingston defeated Hixson and Red Bank in regional and sub-state action, then lost its first two games in Murfreesboro.

“It was our goal from the very beginning to get back to Murfreesboro,” Livingston head coach Christie Jenkins smiled, “and this win tonight will go a long way towards that goal. It wasn’t our best game tonight, but like all the players will tell you, it was a win, a district championship, and that’s what counts. It was also nice to have a home court to play on this season and that really helped to go undefeated, and our crowd was also a very big part of our season. We can’t thank them enough, and you saw how they came here (Crossville) to support us. That was just wonderful.”

Stone Memorial reached the finals of the tournament by beating Upperman on Monday night, and Livingston got to the championship game defeating Cumberland County in three straight games. In the regular season, Livingston was the winner and Stone was second. During the regular season, the two teams played twice and the Lady Wildcats won both in games of 3-0 and 3-1.

“We knew how strong they were,” pointed out Livingston’s Abby Ray. “We played them twice in the regular season and had to really do a good job to beat them both times. Tonight, it was no different, they were real strong tonight, but not strong enough. “

Before a good crowd at the Stone gym, the two teams went at it from the very start with Livingston taking a quick 4-1 lead in the opening game. Stone stormed back to go ahead 7-6 before Ray slammed home a point to tie the game at 9. Stone retook the lead at 13-12, then Ray again knotted the score, this time at 14. When the game reached 17 each, a Stone shot into the net put Livingston ahead at 18-17, then a close-up shot by Lainey Dishman moved the advantage to three at 20-17. Melton then followed with a big slam and Livingston went on to win the game 25-19.

Things kind of unraveled for the Lady Cats in the second game. Livingston took the first three points, then, like it would in all four games, the score got close and several miscues by the Lady Cats and some solid play from the Lady Panthers gave the home team a 25-18 win to knot the contest at one game apiece.

“We didn’t play very good in that game,” Elly Naff pointed out. “For some reason, the ball just didn’t bounce our way. We hit shots out of bounds, let them get the momentum, and they won it. But we knew we could beat them, so we just settled down and came back in the next two games.”

In game three, Ray scored Livingston’s first points, the Lady Cats went up 7-2 and appeared to be back on the right track. A 4-0 run by Stone in the middle of the game closed the gap to 13-9, but a shot by Naff stopped the run and Livingston was rolling again.

Livingston won the game 25-15 when Stone hit a shot out of bounds.

With a 2-1 lead in games, the Lady Cats dug in, used some outstanding sets by Jordan Key, strong up front play from Melton, and two back-to-back points from Keaton Webb to put the game and the championship away, 25-19.

“If you had to sit here on the bench and watch it, it did get a little nervous,” Abby Brown laughed, “but when you’re on the court, it’s exciting and plain fun. When I was on the floor, I wasn’t nervous at all, but when I came to the bench, I could hardly stand it. “

With the championship plaque securely in hand, the Lady Cats waited on individual recognition and got plenty of it.

Sydney Moffitt, Dishman, and Kenley Webb were all three named to the All-Freshman team.

On the All-Tournament team, Qualls, Melton, and Ray took spots, and Key was named the tournament’s Most Valuable Player.

“I’m a very emotional person,” Coach Jenkins added after things were over and had settled down, “and this has been a very emotional night. I can’t say enough for this group of players. They are good and they are dedicated, not only to winning, but to each other, and to me that’s very important. We’ll get ready for the regional tournament that will be at our place (Livingston Academy) next week and for whatever comes next.

“I just hope the season continues despite the virus, but we have no control over that,” Jenkins added. “But looking down the road, we only lose two starters off this team next year, and the junior varsity team is really looking strong, so I believe the future of Livingston Academy volleyball is in real good shape.”

Region action will start tonight, Tuesday, Oct. 13, with the Lady Cats, winners of District 8, facing the number 2 team from District 7 for the Region 4-AA title at Livingston Academy.