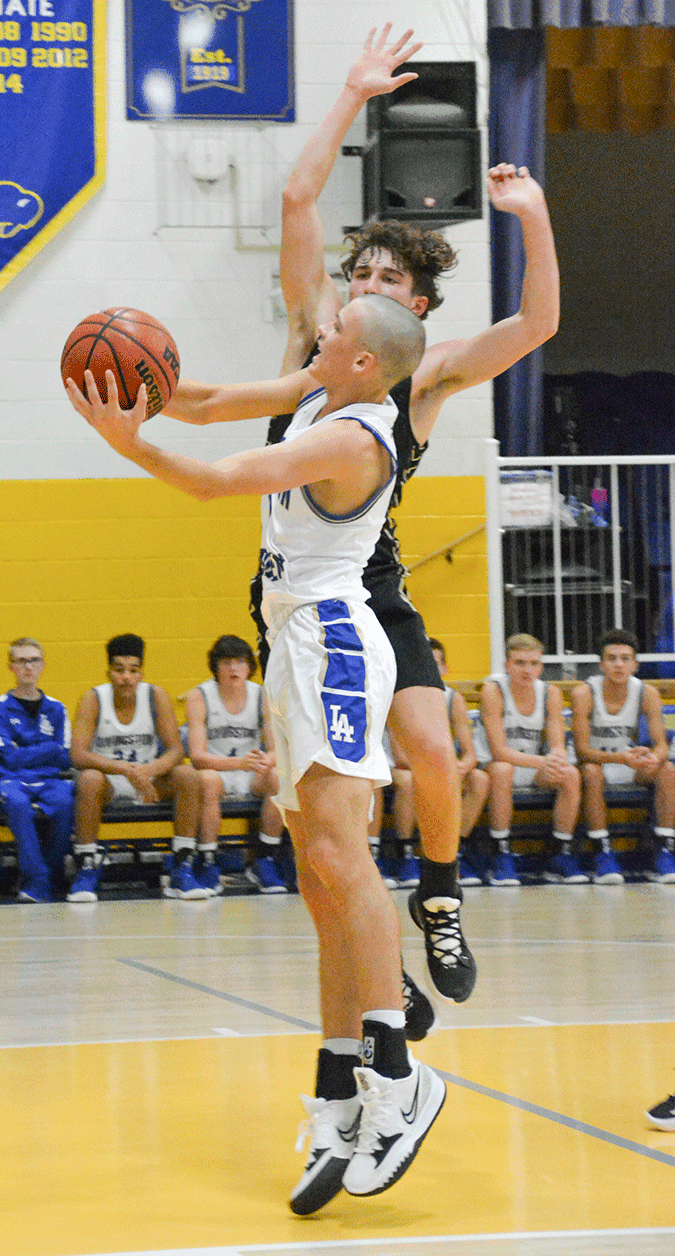 Fresh from shaving his head, Hayden Ledbetter goes for a score. 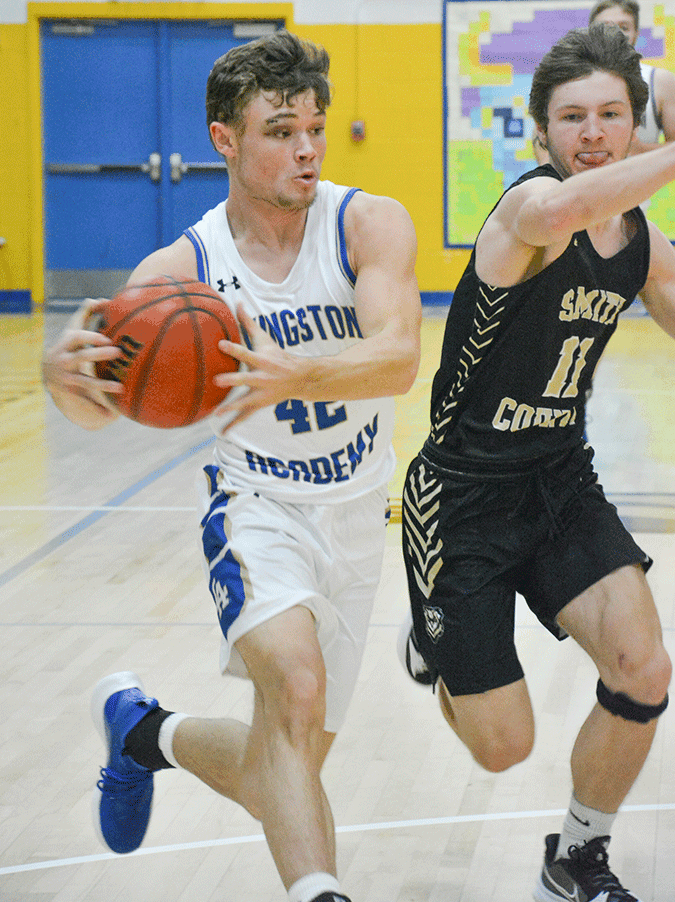 Isaac Story brings the ball down the court for LA.

Fresh from shaving his head, Hayden Ledbetter goes for a score.

Isaac Story brings the ball down the court for LA.

Back when he was in the eighth grade at Rickman Elementary School, a young Hayden Ledbetter wagered a bet with the school’s resource officer (SRO) that he would be 6’, 3” by the time he reached his senior year at Livingston Academy.

Terms of the wager were: if Hayden reached his goal, SRO Dylan Ashlock would have to buy two tickets to a University of Tennessee football game, furnish transportation to Knoxville, and wear an orange UT sweatshirt to the game.

On the other side, if Ledbetter didn’t hit the mark, he would shave his head.

What neither participant figured on was Ledbetter having at least two major surgeries on his knees that certainly played a major role in hampering him not growing to his full potential and having to get his head shaved prior to last week’s start of the 2021-22 season.

“After the way I played in that opening game (only 7 points and no rebounds), I thought I might want to keep my head shaved so nobody would know who I was,” the talented senior smiled, “but after the two games here (Clarkrange), coach (Jimmy Miller) might want to decide which way it goes.”

Ledbetter poured in 15 points and pulled in three rebounds in last Saturday’s Hall of Fame play day at Clarkrange in a hard fought win over Smith County then added 10 points and 5 rebounds against North Greene County in the day’s second contest.

After three early season games, the Livingston Academy Wildcats are surely moving in the right direction, falling to a strong Lipscomb team in the season opener on Tuesday night in Nashville. On Saturday, LA fell to a good Smith County team in the opening round Hall of Fame Day at Clarkrange. In the second game of the day, the Cats cleaned up some mistakes, got aggressive, and came home with a win.

“We didn’t do a lot of things right,” Isaac Story pointed out after a 64-59 loss to a very good Smith County team. “I just didn’t think we played with a lot of intensity. There were some bright spots, but keep in mind, it’s early in the season and that’s one reason we’re playing today – to get real playing time and work on getting better.”

In the nightcap, the Cats did clean up a lot of the early mistakes and slid by a strong effort from North Greene, 48-45.

“We did much better in that game,” head coach Jimmy Miller explained. “We took the first game seriously in that we went over a lot of things we didn’t do that we should have and we cleaned them up. Keep in mind,” the coach added, “this is a young team and we’re working as many players in as we can for experience and learning to work together.”

In the season opener at Lipscomb on Tuesday, the home team rolled out to a 16-8 first quarter lead and were on top 30-23 at intermission. A 26-point effort by Lipscomb in the third frame put the game out of reach in the 75-47 final decision.

“That was just a start,” Hayden Ledbetter stated. “Lipscomb is a very good team, and right now, we’re young and trying to get rolling. We lost some good players, so now we’re trying to put it all back together. We’ll be okay.”

Story led the LA scoring with 15 points, followed by Nick Choate with 13. Ledbetter added 7, and Brodey Coffee and Dawson Simmons each added 6. Daniel Bilbrey was good for 5 points, and Wyatt Hargis added 2.

When Saturday rolled around, the Cats were a bit “closer to home” but still looking to get it together. Smith County, on the other hand, was anxious to show it would be a district contender. The Owls played hard defense and shot the ball well all afternoon.

Livingston trailed by two, 20-18, at the end of the first quarter, but were down by only one, 33-32, at the half. The score stayed close in the third period until the Owls nailed a big three-pointer to move out by five, and despite an answering three by Ledbetter, Livingston could get no closer than five, 48-43, heading into the final period.

The Owls held on for the 5-point win. In the second game, Ledbetter led the LA scoring with 15 points followed by Choate with 12 and Story and Hargis with 10 each. Ayden Coffee had 5 and Brodey Coffee was good for 4 with Dawson Simmons good for 2.

“We could get close, but just could never catch up,” sophomore Hargis pointed out. “We played hard, but we made a lot of bad passes and took a lot of bad shots in that game, and Smith County was good enough to stay on top. We’ll learn.”

Saturday evening, Livingston cleared out a lot of mistakes and polished off North Greene 48-45.

North Greene took a one-point, 11-10, lead after the first quarter and held the margin with both teams scoring 12 points in the second frame. Livingston knotted the score at the end of the third period at 38, then outscored the home team 10-7 in the final quarter for the three-point win.

Choate and Story each scored 14 points for the Wildcats, Ledbetter added 10, Bilbrey was good for 5, Brodey Coffee had 3, and Simmons scored 2.

Livingston Academy will be on the road this week, playing in a Thanksgiving tournament at Independence.