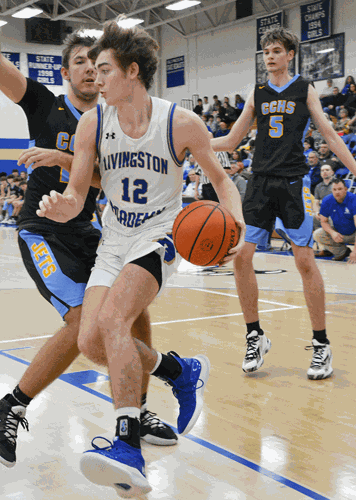 Wyatt Hargis brings the ball around for LA against the Jets. 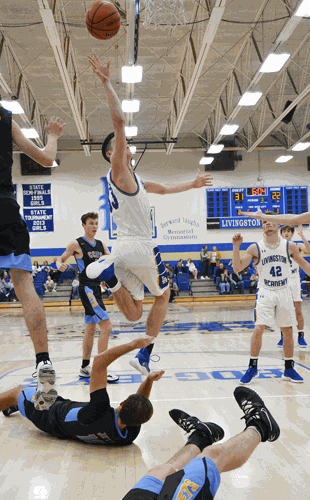 Cumberland County Jets lay sprawled on the floor as LA’s Nick Choate twists for a layup.

Wyatt Hargis brings the ball around for LA against the Jets.

Cumberland County Jets lay sprawled on the floor as LA’s Nick Choate twists for a layup.

Back before the season even started, the Livingston Academy boys weren’t given much of a chance of doing a lot of impressive things in the upcoming season. Now, with only six games remaining in the regular season, the Wildcats are making a strong showing and could contend for a top spot in the final standings.

“We’ve had several things happen so far this season that has been a big effect on our season,” head coach Jimmy Miller started out, “and one of the biggest things, our kids believe in themselves and have shown tremendous efforts to come out with wins despite some minor negative events. We haven’t won them all, but with only one exception, we have been right there at the end, win or lose.”

Last week was a good example. Snow backed up the schedule for starters, forcing the Cats to play three straight games at the end of the week, and two of the games were against unknown district teams. When it was all over, Livingston had to fight for its life against district foe Stone before pulling out a 54-52 win.

In the second game of the week, on Friday, in what had been an easy 77-34 win over Lighthouse Christian earlier turned out to be another nail-bitter where the Cats had to fight all night for a 55-47 win. Then on Saturday, the Cats faced Cumberland County, a team determined earlier to be the one to beat, and came away with a very disappointing 53-49 loss.

“That was a game we let get away from us early,” Isaac Story explained after the setback. “I won’t say we were tired, having played three straight games, but that had to have some effect on the way we played. We couldn’t get anything going in the first half, then came back in the second half to almost pull it out. We just never quit trying.”

Miller said after Saturday’s game that the week had been tough, not only playing three straight days, but also playing two teams they hadn’t faced before, and the third game, where in the previous meeting the Cats had won easily, but this time out, the opponent had added two players that made them extremely tough.

“I’ve said it before and I’ll say it again,” Miller added, “we play as tough a schedule as anybody in our class in the state.”

Crossville’s Stone Memorial was the week’s first object and started a run of district foes that will carry until February 11. It was the first meeting of the two squads of the season. Livingston took a 12-10 first quarter lead, then fell behind in the second frame and trailed 25-22 at intermission.

In the third quarter, the two teams stayed close, with Stone clinging to a slim 37-36 lead heading to the final frame. In that fourth quarter, Livingston pulled ahead by two, and fought off several challenges by the visitors to pull out a 2-point win.

“It wasn’t pretty, but it was a win,” Hayden Ledbetter later explained. “We didn’t play well, but we played hard and won. That’s about all you can say. It was in our favor that we did match them point for point late and won.”

Story led the LA scoring with 17 points, followed closely by Nick Choate with 15 and Ledbetter with 10.

Wyatt Hargis helped the cause with 9 points and Brodey Coffee added 3 to round out the Livingston scoring. Choate was the Cats’ leading rebounder with 6, Hargis added 5, Ledbetter 3, and Coffee 3.

In their first meeting back in early December, the Wildcats had no trouble cruising by Lighthouse Christian, but this time things were much different. At the end for the first quarter, the Wildcats led by only 4, 11-7, and had to fight hard to hold a 30-26 halftime lead.

“They just would not go away,” Story stated. “They had two players that night that did not play the first game and they made that team totally different. They were very good.”

Ledbetter answered with a three to put LA back on top, then Story, Choate, and Ayden Coffee kept the challengers at bay for the 8-point win.

Story again led Livingston in scoring, this time with 14. Choate and Ledbetter each added 11. Ayden Coffee had 7, Hargis 6, Brodey Coffee 4, and Easton Goodpasture 1.

That set the stage for incoming Cumberland County in a make-up game on Saturday. Both teams were 4-1 in district play and shared the district’s top spot.

Story opened the game with 5 of Livingston’s 7 total points, but it was a 13-point performance by the Jets that stole the show. Story and Ledbetter did most of the scoring in the second frame for the Wildcats, but Cumberland dominated the game and led 29-20 at the intermission.

“We couldn’t buy a basket in that first half,” Choate would point out after the game. “Nothing would go down, nothing. Not by me, not by anybody, but we kept on trying.”

Heading to the final eight minutes, Livingston trailed by 7, 43-36, but then things started to turn.

Choate opened the final period with two free throws then added a field goal, a free throw, and another field goal, and with a free throw, the big senior center had pulled his team to a 44--43 lead. In that final quarter, Choate would score all of Livingston’s 13 points, but a final three-point shot from Ledbetter hit the rim and fell short to force an overtime.

“We didn’t win that one, but it was our fault,” Choate added. “We just couldn’t make a shot from anywhere in that first half. Had we made just a few, you can see what the difference would have been. Tonight we lost, but I think we should have convinced ourselves we can stand with any team in this district. We’ll meet again.”

“We came up just a little too short,” Goodpasture added. “Early, we didn’t make the shots, but in the second half, we came around. All in all, it was a good effort and convinced us we can play with any team in this district. Can’t wait to play them again.”

Choate led LA in scoring with 18 points while Story added 15. Ledbetter added 8, while Hargis and Brodey Coffee each scored 4.

Livingston will carry an 11-8 overall and 4-2 district record into play this week with home games against Macon County tonight, Tuesday, Jan. 25, and DeKalb County on Friday.Livingston has beaten both teams already this season.