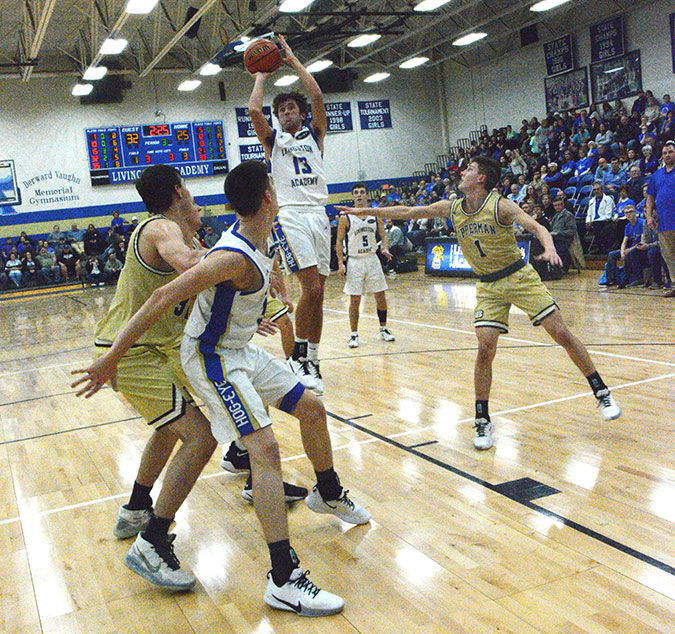 Will McDonald, #13, takes an outside jump shot while teammate Nick Choate blocks out inside. 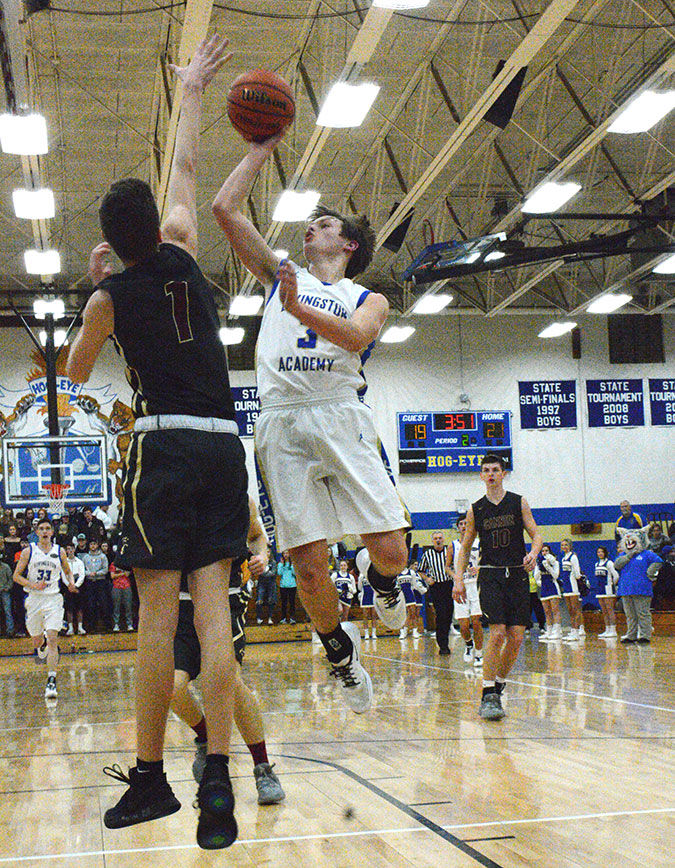 LA’s Eli Melton goes over a tall Cannon County player for a shot. 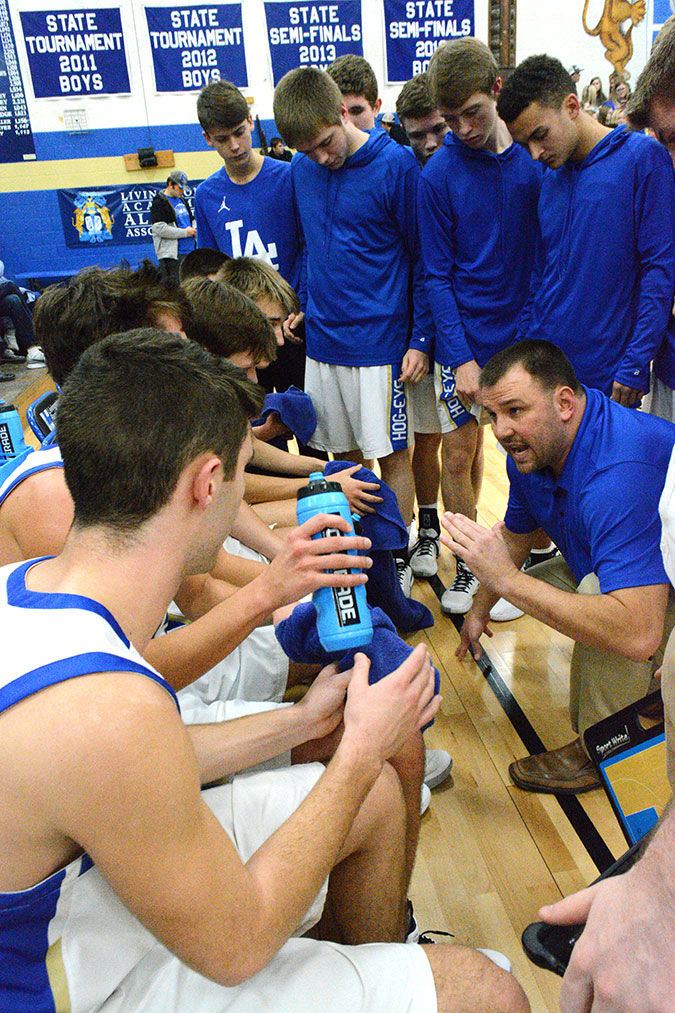 LA coach Jimmy Miller tries to get a point across to his team during a time-out.

Will McDonald, #13, takes an outside jump shot while teammate Nick Choate blocks out inside.

LA’s Eli Melton goes over a tall Cannon County player for a shot.

LA coach Jimmy Miller tries to get a point across to his team during a time-out.

“Don’t ever get the idea that losing is okay,” Livingston Academy head basketball coach Jimmy Miller told his team shortly after Friday night’s encounter with Baxter, the number three 2AA team in the state, “but tonight you did an exceptional job and you have nothing to be ashamed about. It was a great game, and from it, I hope we all learned one thing – this team is a winner.”

Over the past 20 or so years, Livingston and Baxter(Upperman) had had some classic high school battles, and not always has the stronger team won. Just last season, when Upperman was again one of the state’s top ranked teams, Livingston hung an early season loss on them. Later the Bees returned the favor.

And whoever saw it several years ago at Tennessee Tech will forget the super regional playoff game where Upperman clipped the Wildcats 53-52, getting revenge for the same situation the previous year in the same location with the same score, in double overtime, only this time it was Livingston that pulled off the win.

Such has been the history of this outstanding rivalry and it continued Friday when the Bees brought an outstanding team to Derward Vaughn Gym to face a Livingston Academy squad that is having a hard time finding itself. One night it is good, the next not so good.

Only earlier in the week, the Cats hosted a very tall and good shooting team from Cannon County and stayed close until late in the game when they let the visitors run off six unanswered points and lost by six, 60-54.

“We let that one get away and we didn’t play well at all,” Miller said after that loss, the Cats’ 13th loss of the season against nine wins. “This is not the same team that shows up in practice. Right now, we don’t have a lot to talk about except this team has got to find out how to win.”

Against Cannon County on Tuesday, it was a typical Livingston Academy showing – stay close or lead early, settle in to a pattern that allows the other team to catch up and lead, stumble in the third quarter, fight back hard in the fourth, then lose in a close contest.

Such was the case with Cannon County. Livingston got out to a 15-12 first quarter lead, trailed by four, 30-26, at intermission, pulled to within three, 45-42, heading to the final frame, closed the gap to win, then ended up losing.

“That’s the part we have got to get over,” Miller would add. “We play hard at first, then something just happens and we make mistakes and end up not finishing the job. We’ll just have to keep on working hard on that.”

Strong rebounding over a much taller team helped the Wildcats stay in a position to win. McDonald led the way with 5, while Hollars, Sells, and Choate each had 4, and Carwile added 2. On the night, the taller Lions team held a slight 24-20 lead in the rebounding department.

So when Friday rolled around, there were few who were betting the Wildcats could do anything with the powerful Bees. After all, Livingston had dropped three straight that included a 66-54 loss to York on the previous Friday. There wasn’t a lot in LA’s favor.

But “determination” may have been a forgotten factor.

“We knew they were much bigger than us and it would take our best effort to stay with them,” Livingston’s Choate said after the game. “It was physical, which was okay, and I think we learned a few things, but overall, we played our hearts out, and to me, I feel like we can play with anybody in this district. I got that out of this.”

Choate wasn’t by himself. Sells, who has little to say, was convinced that “when we play as a team, cut down on mistakes, and play good defense, we can stay with anybody.”

Sporting an 18-2 overall mark and an unblemished 7-0 district record, the Bees were a very heavy favorite to roll to another “easy” win, but coach Bobby McWilliams played it a little on the cautious side before the game even started.

“This is Livingston-Upperman and there have been a lot of games between us that haven’t gone the way they might have gone,” McWilliams said. “We don’t play well here for some reason, and we will have to play at our best to win.”

The coach was dead on.

Sells got things rolling for the home team, got LA’s first four points, McDonald took a perfect pass from Hollars for two more, Sells had a field goal, and Choate scored from inside to give Livingston an 8-4 lead. Upperman would get it together and lead by one at the end of the period, 11-10.

Second half action was a back and forth affair, but the inside strength of Upperman, with three players over 6-7, took over and the visitors led 27-20 at the half.

Livingston trailed by six, 37-31, going to the final frame, and while the Cats could get close early in the period, they could never take the lead. Choate cut the lead to five, then Carwile nailed a three-pointer to get it close again with 5:02 to go. Choate pulled his team to within 2, 41-39, but the Bees would respond to the charge, slow the tempo, then score on sure inside shots.

With time running out, Sells hit a three to get LA to within two, 48-46, then Upperman hit two free throws for a 50-46 lead with only 10 seconds remaining. McDonald then hit a three at the buzzer getting the Wildcats to 49, one short of Upperman’s 50.

“That was a good game against a very good team,” McDonald stated. “We played hard and showed a lot more than we have in the past few games. It’s encouraging.”

Livingston will be at home tonight, Tuesday, Jan. 28, against DeKalb County then hit the road Friday to Smith County. There are only six regular season games remaining before the district tournament.