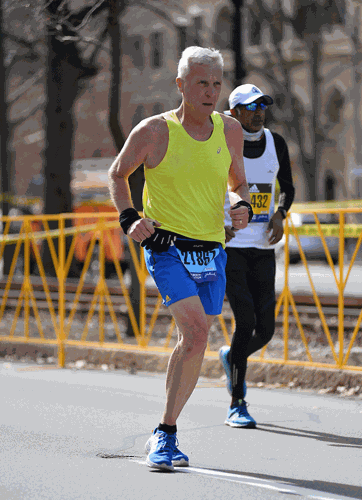 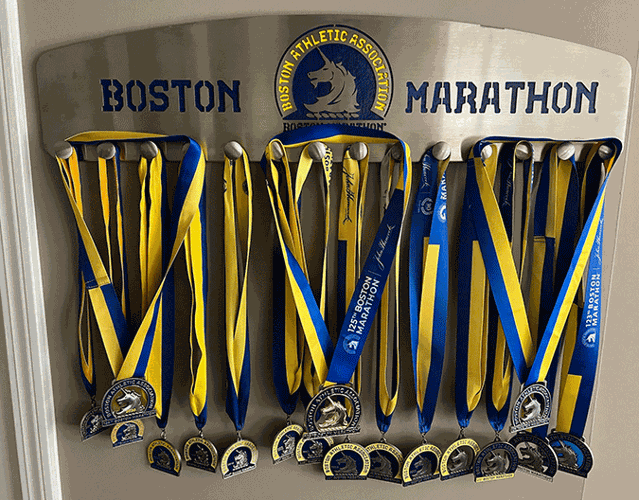 Lynn Burnett has the hardware to show for his 17 Boston Marathons.

Lynn Burnett has the hardware to show for his 17 Boston Marathons.

The Boston Marathon is the world’s oldest annual marathon and the most prestigious due to the qualifying standards for entry. Each year an estimated 500,000 spectators gather along the 26.2-mile course from Hopkinton, MA, to downtown Boston.

Due to the qualifying standards set forth by Boston Athletic Association for entry into the Boston Marathon, it is an honor to be able to participate in the event. On Monday, April 18, Lynn Burnett completed his 17th consecutive Boston Marathon and 52nd marathon in total.

Burnett started running in 1994 when he realized he really needed to lose weight and get in shape. He was inspired by John Clough after talking to him about the years he ran the Boston Marathon, so he thought he would give running a try.

In 1997, Burnett entered his first marathon, the Marine Corp Marathon in Washington, D.C. It was not until 2005 that he was finally able to complete a marathon fast enough to qualify for the 2006 Boston.

The road to the 17 consecutive years at Boston has been tough. Burnett has had to run as many as four marathons a year to get a qualifying time fast enough to enter, but has also qualified for Boston at Boston several times.

He has also had some major setbacks along the way. In 2015, he developed microscopic tears in his hamstring and could not run for four months. In 2019, he was diagnosed with prostate cancer and had a prostatectomy that December, which sidelined his training for a while. The following year, he had a kidney stone that led to sepsis, again delaying his training. Luckily, he already had recent qualifying times that he was able to use for entry those years.

The 2013 Boston Marathon will always be in his mind as he witnessed both explosions of the Boston bombing and he and his wife, Anita, were in all the chaos that followed.

His current goal is to run 20 consecutives, but if things go well that could change to 25.