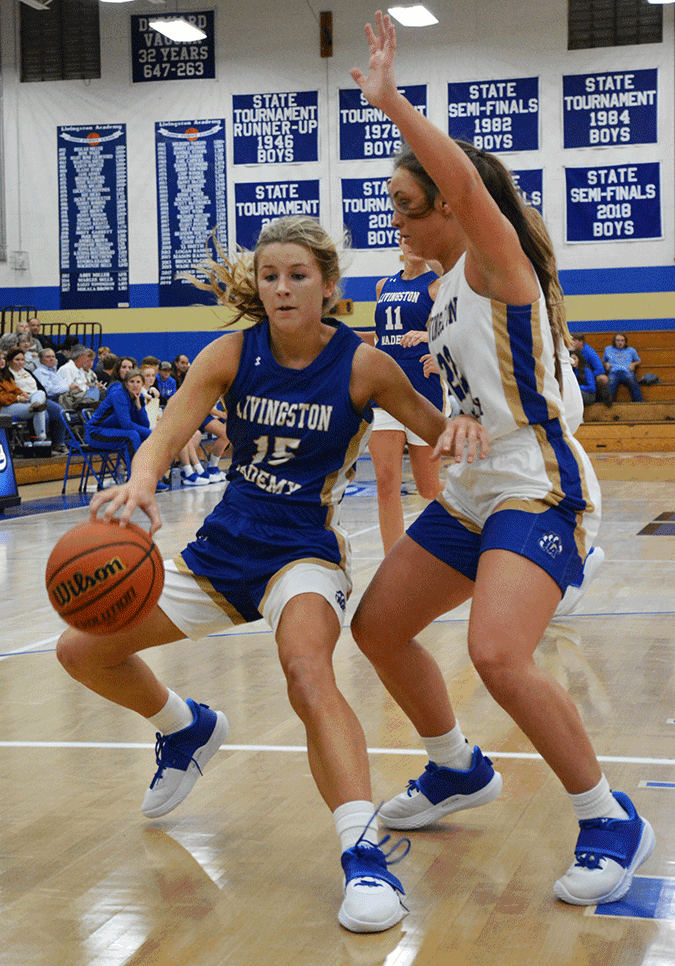 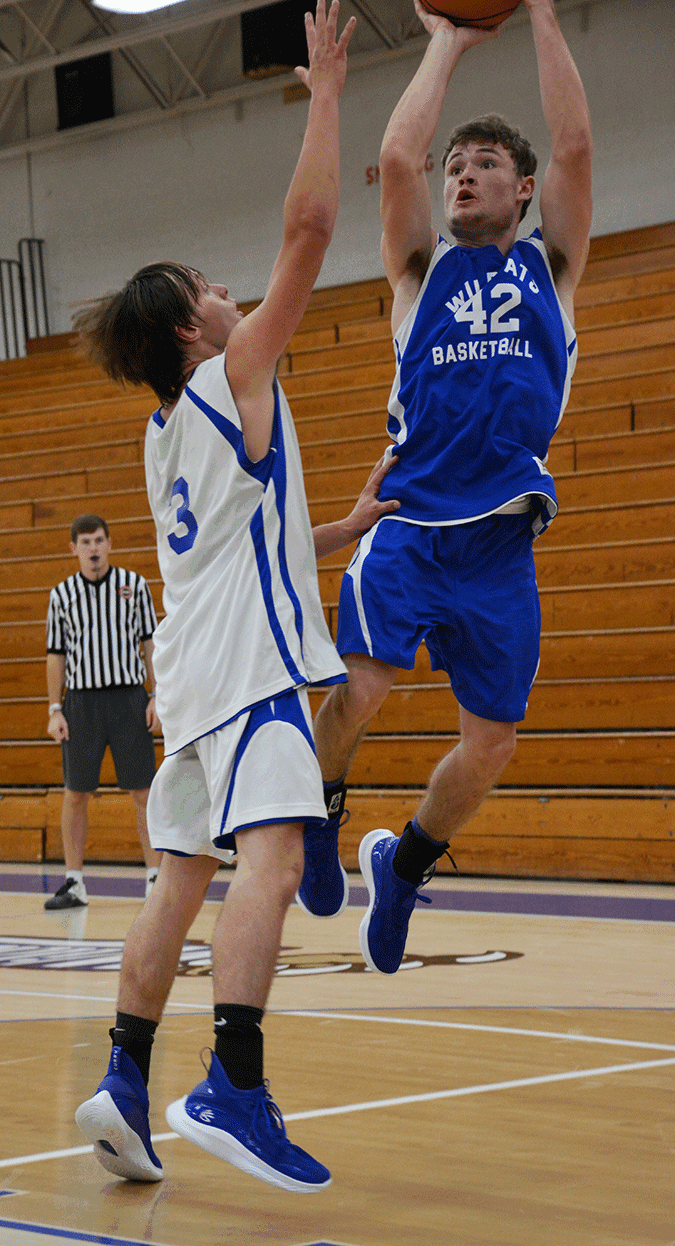 Isaac Story, #42, shoots over a defending Eli Melton, #3, in the Wildcats Blue-White game.

Isaac Story, #42, shoots over a defending Eli Melton, #3, in the Wildcats Blue-White game.

With basketball now almost a year-round sport, what is the purpose of having an inter-squad game before the start of the regular season?

“Because it’s fun and we’re excited to play anybody, and that includes ourselves,” pointed out Livingston Academy senior Nick Choate last week, moments before the start of what is now the Annual Blue-White game.

And it gives family and fans the first look at the new season’s teams, both boys and girls, and it also gave a first impression of upcoming freshmen and where they will fit into the program.

“And it gives us a chance to see if we’ve cleaned off any rust spots,” explained senior Alexis Phipps.

A nice crowd filled over half the LA gym before action got underway last Tuesday, and from the way things went, it was good to be back in the gym for all concerned.

Livingston Lady Wildcats head coach Lesley Riddle divided her team into two squads, then let assistants Billy Sells, Abby Jolly, and Jaylee Hall do the coaching. It wasn’t to see who would win, but who could play with each other.

“I thought all in all, it was a pretty good show,” Sells explained after the game. “There were some bright spots and some dull ones as well, but you have to consider this was the first time in front of family and fans and they were a little excited.”

“I thought we were a little ragged,” coach Riddle stated, “and I agree with coach Sells, the players were a little excited before the home crowd for the first time. I did see some good things from several of our freshmen. I thought Ellie (Butler) and Keely (Mullins) handled the ball well, as did Emma Stover and Mallie Carwile. They did have problems when they tried to go inside to the basket, but that’s something that will take time getting used to. It’s different here than it was back in middle school.”

The coach also liked what she saw in the inside game where the Wildcats, for the first time in years, has some height and strength in close.

“Aleah (Melton), Lilly (Bates), and Halle (Ledbetter) showed some strength inside from time to time, but we will have to have strong play from them all the time. I did like what I saw though, and also saw some places we’ll have to work on.

“Overall, Keaton (Webb) and Allie (Qualls) showed leadership as seniors, and I think they all had fun out there,” the coach concluded. “We start for real on November 16th, and that’s not far away.”

Sophomore Mallie Coleman was the first to admit that “it felt good out there tonight. I think back to last year and I was nervous and scared, and tonight, it just came natural. I can’t wait to start real play.”

On the boys side, coach Jimmy Miller was more than excited about the offensive play of his two squads and added, “We can learn defense in a short time, shooting, passing, and scoring take much longer.”

When it was over, the Blue Team outscored the White Team 74-62.

“It was good seeing them shoot the ball,” Coach Miller continued. “They showed a lot of confidence, and that’s a real good thing. Once we started shooting, the shots fell and the rhythm was there up and down the floor.”

Junior Eli Melton paced the White Team with 19 points, sophomore Wyatt Hargis added 16, and freshman Tucker Miller dropped in 11. Senior Dawson Simmons had nine points and added 5 rebounds. Cole Harris had 5 points and 5 rebounds, and Tayshawn Hayes was good for 2 points. Peyton Looper was a member of the White team and played 17 minutes.

“I thought Eli really played hard,” the coach added, “and Dawson had his moment, expecially under the boards. He has got to be strong for us inside all season.”

“It was a good night and I really think we found out some things about ourselves,” assistant coach Nate Kennard added. “The kids had fun, I think the crowd enjoyed it, and finally, we’re back in the gym and playing basketball. I think we all are looking forward to that.”