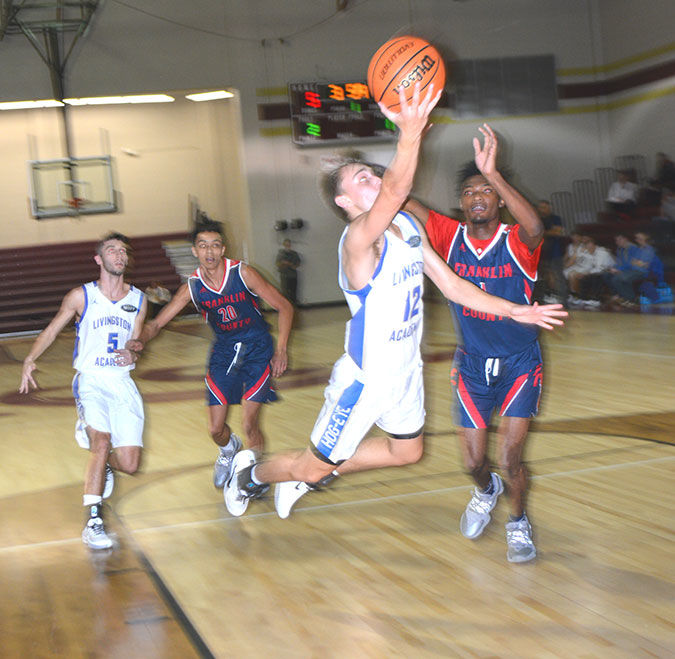 Matthew Sells goes parallel to the floor for a driving layup against Franklin County in last weekend’s action. 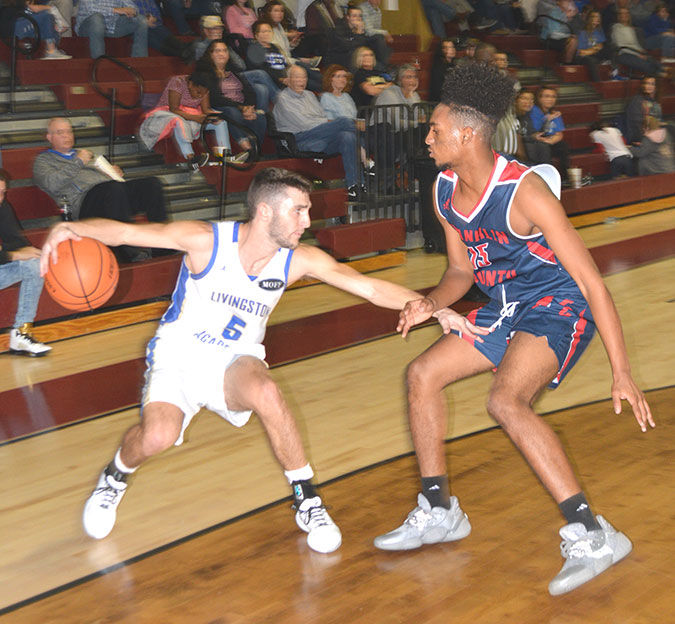 Aubrey Hollars tries to move a Franklin County defender as he drives the baseline in the Cannon County Thanksgiving Classic. 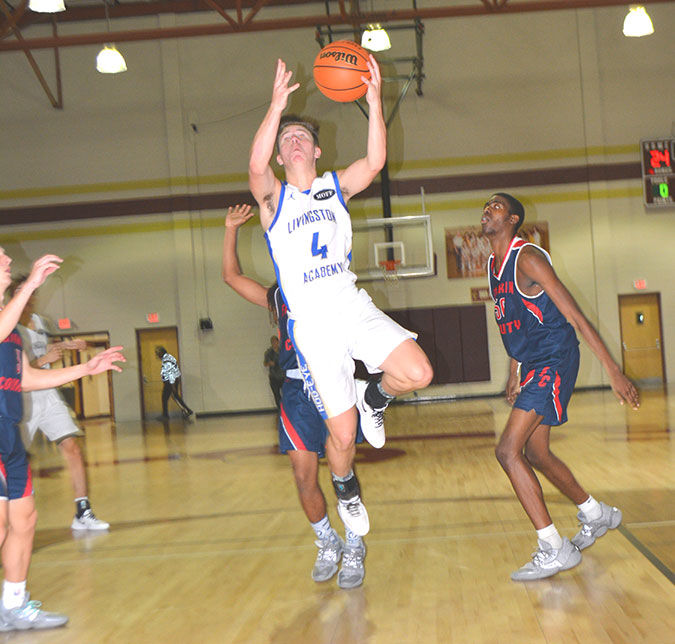 Matthew Sells goes parallel to the floor for a driving layup against Franklin County in last weekend’s action.

Aubrey Hollars tries to move a Franklin County defender as he drives the baseline in the Cannon County Thanksgiving Classic.

“When I see that first one go through, then I think I’m ready. Until then, no telling what’s going to happen.”

That was Livingston Academy junior basketball standout Matthew Sells explaining just how he gets ready for a hot shooting night. In three games last week, it took Sells several trips up and down the floor to finally “see that first one go through”, but once that took place, he and his Wildcats teammates got things rolling, taking two wins in three days of holiday basketball.

While Sells is scoring in double figures in all six games so far this season, several others are still trying to get that part of their game in motion, but overall, at 3-3 after six games, the Wildcats are closing in at being a close-knit squad and starting to play very well together.

“Actually, we need some practice time,” head coach Jimmy Miller pointed out late Saturday afternoon at Cannon County High School where his team had taken a pair of wins against two very quick and physical teams in Coffee County and Franklin County. “We’ve played six games in a couple weeks, didn’t have three of our players until football season was over, so we really haven’t practiced all that much, just played games.”

After the two wins at the Cannon County Thanksgiving Classic, one might think the Cats really didn’t need the practice, just play games. That’s not the case.

“Practice gives you time to work on timing, and passing and all the other aspects of the game, “ Miller continued, “and right now, we’re kinda running on fumes, getting the job done, but not perhaps as good as you could had you had time to practice. Don’t get me wrong, we’ll take the wins, but on the other hand, we need the practice time.”

If its practice time they need, the Cats had better get it done in a hurry since they will travel to always tough Upperman Friday night in a game that will really show what is needed.

“We play Upperman Friday, hot dog,” senior Will McDonald said in the dressing room after Saturday’s game with Franklin County. “I love to play them because they are good and you can learn a lot about yourself and your team when you play them. Better take your ‘A’ game down there.”

But before they travel to Baxter, the Wildcats had some Thanksgiving holiday ball to take care of. First was Pickett County, a team LA has beaten only twice in the past five years, then it was the Cannon County tournament.

It has almost become a habit that Livingston falls to Pickett County and it happened again last week, but there was a big difference – the game could have gone either way, and it was a heartbreaker to drop the decision by a final free throw, 62-63.

The Bobcats, on the other hand, were staying close with the three-point shooting of the Amonetts, Zach and Will. Before the night was over, the pair would hit 19 and 12 points, respectively, and simply keep their team close.

With only 48 seconds remaining, Pickett County tied the game at 62, then Zach Amonett went to the line late and made one of two free throws for the win.

Sells led LA with 27 points and 8 rebounds while McDonald added 15 and 5 rebounds. Hollars had 7 points, Coffman 6, Melton 5, and Nate Carwile 2.

That set the stage for the weekend tournament in Woodbury where the Cats would take on a very good Coffee County team and what would turn out to be a good rebounding, but poor shooting Franklin County squad.

“I think we felt good about the tournament,” Coffman said when it was all over. “We played well at Pickett County and lost by only one, so we could see it was getting close.”

Coffman was right. Against Coffee County, the Cats had to play the best game of the season, fighting all the way, coming back from 18 points down in the final quarter then getting some heroics from freshman Melton to take the 76-75 win.

“That was a really great game, Coleman would later explain. “We played hard, they played hard, and only one point was the difference. It does make us realize that we can get the job done and we’ll have to take that kind of a game to Baxter next week.”

Sells had 28 points in the game, while McDonald, getting his basketball legs under him after football season, had an outstanding effort, and his 24 points were huge. Melton had 9, Hollars 8, and Coleman and Coffman 6 each.

“That was impressive from our standpoint,” LA assistant coach Nate Kennard explained. “It was a great team effort and it let our players know they have that kind of an effort in them. I was pleased and I’m sure everybody else was as well.”

Saturday’s final game started out like it would be another barn burner, but in the second half, the Wildcats played outstanding defense while getting all the points they needed.

Livingston trailed 14-9 at the end of the first quarter, but moved on top with 4:50 left in the period on a three-pointer by Sells. Coffman added a field goal and Carwile dropped in two to give LA a 24-21 lead at the half.

Steady shooting by Coleman, McDonald. and Sells moved the Wildcats into a commanding 42-29 lead going to the final quarter, then it was only a matter of running out the clock as Franklin just could not buy a basket either in close or from the outer ranges.

It was Sells on top in the scoring with 29, followed by McDonald and Coleman with 9 each, Coffman with 7, Carwile 6, and Melton 2.

Livingston Academy, 3-3, will get district play underway Friday at Baxter.