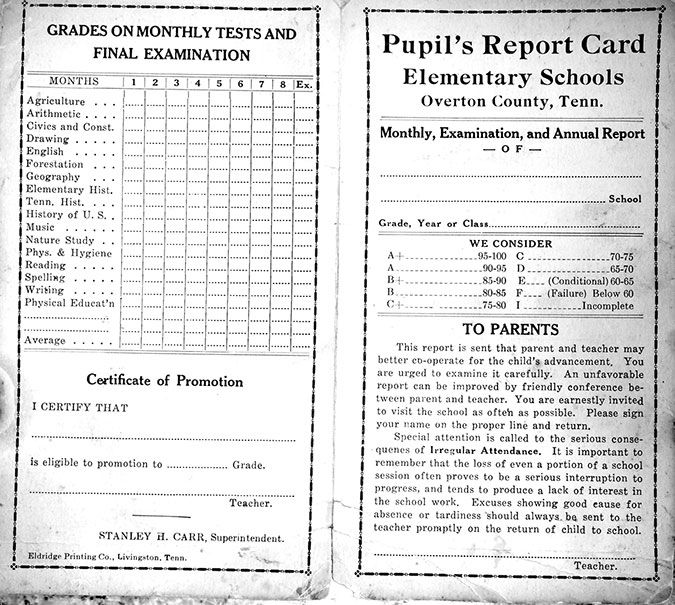 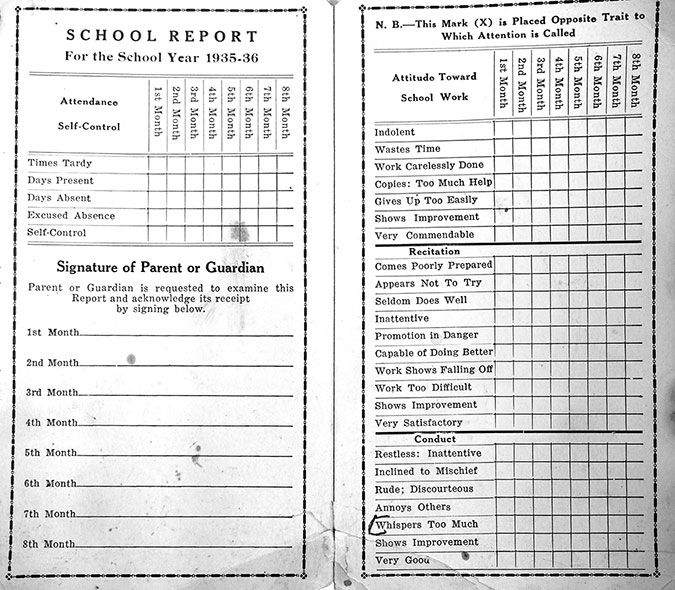 When Luther Coffee recently found an Overton County Elementary Schools Pupil’s Report Card for the school year 1935-36 in an old house he bought, he was taken back to his childhood by the subjects listed under “Conduct”.

Even though his school days don’t go back as far as the one-room school house of 1935-36, one of those subjects was dear to his heart, and another area.

“Whispers Too Much,” Coffee said. “I got two spankings, at least, for whispering.”

The report card included a section on Attendance and Self Control, which listed Times Tardy, Days Present, Days Absent, Excused Absence, and Self-Control. And a note “To Parents” on the report card encouraged attendance, which shows that then as it is now, attendance was considered a strong influence on student success.

Though some of those subjects have disappeared from the curriculum and thus report cards, some would say unfortunately, the 1935-36 report card also had other interesting categories that went a bit further in trying to show parents how their children were doing in school.

“Recitation” is an area on the report card that tells parents about their child’s work ethic. Teachers could check off on Comes Poorly Prepared, Appears Not To Try, Seldom Does Well, Inattentive, Promotion in Danger, Capable of Doing Better, Work Shows Falling Off, Work Too Difficult, Shows Improvement, and Very Satisfactory.

Then there is an area for Conduct, which includes Whispers Too Much that Luther Coffee became familiar with in his school days.

Other possibilities to be marked under “Conduct” included Restless: Inattentive, Inclined to Mischief, Rude: Discourteous, Annoys Others, Shows Improvement, and Very Good.

Though the report card does not name the school, which was likely in the Muddy Pond area, it does list Stanley H. Carr, Superintendent. No marks are on the report card Coffee found, so it may have belonged to a teacher who never used it.