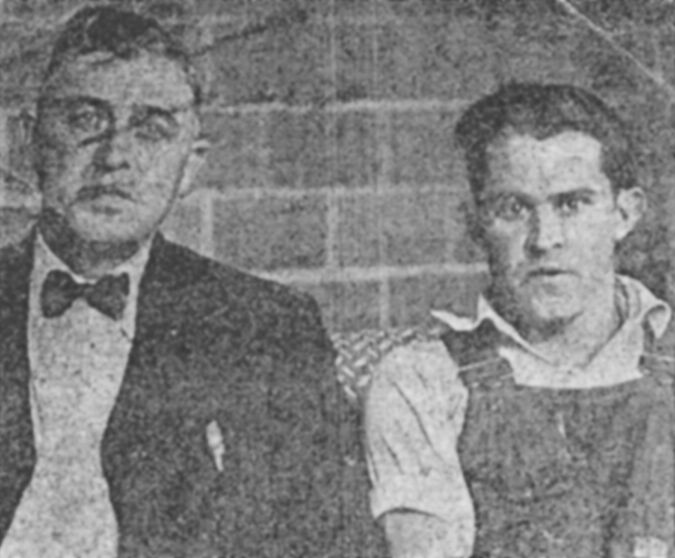 Cumberland County Sheriff Sam Ryan and Harley Evans, age 24, were photographed by a photographer from Harriman, TN, after Evans was transported to the jail in Crossville because of threats to aid his escape in Jamestown had been made by his friends. 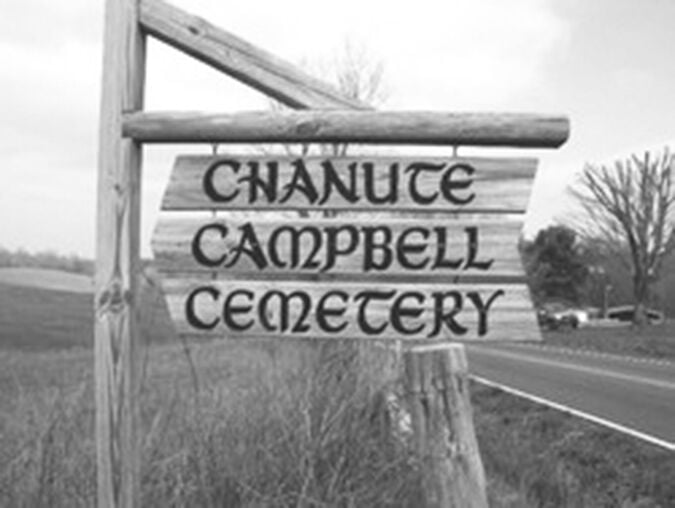 This cemetery is located on Highway 127 in the Chanute community of Pickett County.

Cumberland County Sheriff Sam Ryan and Harley Evans, age 24, were photographed by a photographer from Harriman, TN, after Evans was transported to the jail in Crossville because of threats to aid his escape in Jamestown had been made by his friends.

This cemetery is located on Highway 127 in the Chanute community of Pickett County.

It is usually when the summer heat is the most intense that the World’s Longest Yard Sale is held on Highway 127 each year. Travelers from everywhere drive that highway that includes some of Tennessee’s most beautiful scenery. This is especially true from Static, Ky to Wolf River in Pall Mall near the birthplace of Alvin C. York. More than likely, visitors passing through the Chanute community do not even notice a cemetery known as the Chanute Campbell Cemetery on Highway 127. According to FindAGrave, there are a little more than 300 graves in that cemetery, and one of those buried there is a young man by the name of Harley Evans. He became somewhat of a celebrity after committing two murders, and then receiving a sentence to die in the electric chair in the Tennessee State Prison back in 1939. Harley was only 26 years old when his life was taken by electrocution. From information available on line, here’s a look back at the events that led to his death

Harley Evans was the oldest of six children whose parents were Ed P. Evans and wife Pearl E. Moody Evans. According to an old newspaper article, their home was located somewhere in Overton County, TN. The beginning of the end of Harley’s life started when a Fentress County law enforcement officer was attempting to serve a warrant on him for disorderly conduct at a café in Jamestown. According to Fentress County Sheriff Wilford Smith, Harley and another young man by the name of James Bishop were accused of “shooting up” the café owned by Bishop’s father-in-law, Dave Fox, and a warrant was sworn out for their arrest. While standing outside the café, the Town Marshal of Jamestown, Oder Fowler (whose given name was John Theodore Fowler), was attempting to read the warrant to Harley when Harley drew a gun and began shooting. Both Fowler and another man by the name of Ross Phillips, a Fentress County surveyor, who was attempting to aid Fowler, were killed. Deputy Sheriff M.A. Robbins received a flesh wound in the neck during the shooting. Harley and James Bishop were arrested and charged with murder shortly thereafter. The two were later taken to the Cumberland County jail in Crossville for safe keeping when officials became aware of possible mob violence and plans to free Harley being made by his friends. Murder charges against Bishop were later dismissed.

In January of 1939, a Fentress County jury found Harley guilty of first degree murder and sentenced him to death in the electric chair. Following the jury’s verdict, Judge Jesse L. Rogers set the date for execution. It was the first death sentence in Fentress County since 1872. According to a newspaper article, those who had crowded in the small courtroom were visibly shaken following the Judge’s announcement. A sister, along the Harley’s parents, were among those in the courtroom. Upon hearing of the pending execution, Harley’s sister fainted and his parents wept loudly. Harley was said to have showed no emotion, and spectators in the courtroom were not allowed to leave until Harley was escorted back to the county jail.

It wasn’t until August 28, 1939, around sunrise on that particular morning, the execution took place. At 5:22 a.m., Harley was strapped in the electric chair and at 5:25 a.m., he was pronounced dead. Evidently, his parents were among those who watched as the newspaper article says his mother was weeping as the execution was carried out.

Following the execution, the headlines of a newspaper said this: “Hundreds View Body of Slayer After Execution.” It reads as follows: “Jamestown, TN - August 28 - Several hundred Fentress Countians flocked into an undertaking establishment this afternoon to view the body of Harley Evans, 26, who was the first man to be executed under sentence of death in Fentress County since 1872. Evans body was brought here this morning from the state prison at Nashville where he was electrocuted at about sunrise for the murder of Ross Phillips here March 15, 1938. Evans also was under a life sentence for the murder of Town Marshal Oder Fowler here on the same date. Phillips was killed when he went to aid Fowler. The undertaker announced shortly after the body reached here that it might be viewed by the public beginning at 3 o’clock this afternoon. When that time arrived, there were several hundred persons waiting to see to body, many of whom had come to town from their rural homes for that purpose. Evans did not lose his nerve this morning when he paid with his life for his crime while his aged mother and father wept and prayed in the waiting room of the penitentiary. Their efforts to obtain clemency had been futile. Evans, who pleaded self-defense in his trials, told Chaplain Pickens Johnson a few minutes before his death to “tell the boys to do the best they can. If a man tried to kill ‘em, kill him.” After Evans had been strapped in the chair, he saw a group looking at him through an opened window of the death house, and grinningly told them: “You boys ain’t doing no good, are you?” Funeral services for Evans will be held tomorrow at the home of his parents, Mr. and Mrs. Ed Evans, in Overton County.”

According to the Tennessee Department of Correction’s website, from 1913 to 1915, there was no capital punishment in Tennessee. Research about Tennessee governors shows that Thomas Clarke Rye was the first governor to hold office when the first execution by electrocution took place in Tennessee. That was in 1916 when a black man by the name of Julius Morgan from Dyer County who was convicted of rape died in the electric chair. Three others were executed that way during Governor Rye’s term. Other interesting facts about Governor Rye include the fact that he was born in a log cabin in Benton County, TN, and he was the 32nd governor, serving from 1915 until 1919. He was described as a “terror to bootleggers and dispensers of whiskey.” In 1915, Governor Rye signed legislation chartering Tennessee Polytechnic Institute in Cookeville which later became Tennessee Tech. He died at the age of 90 years and 3 months, which made him the third longest living governor of Tennessee.

Chanute Campbell cemetery is located on a hillside on Highway 127 in the Chanute community of Pickett County. No doubt Harley Evans is the only person among the many others buried there who was sentenced to death by electrocution because of murders he committed. His memory must have lived on for quite some time after his death, not just because of the crimes he committed, but for the way his life was ended. Word of mouth about the murders and the pending execution must have traveled quickly throughout Jamestown and all communities nearby in spite of the fact very few telephones were in use in 1939. Those in the large number of folks who attended his viewing, even though they may not have been even slightly acquainted with him, probably told of that experience many times over in the days that followed the death of Harley Evans.