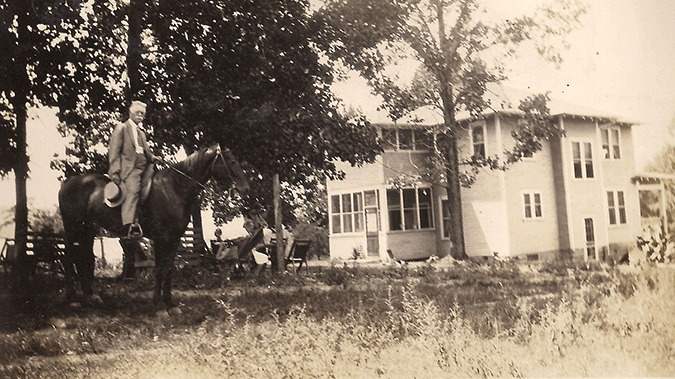 Dr. Claire Adams was photographed on horseback in the back yard of the Presbyterian manse at Alpine. 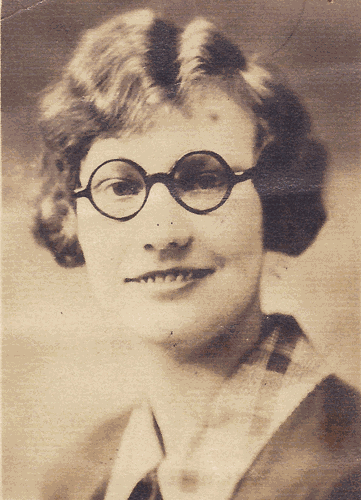 Harriet Faust was among those who traveled from Pennsylvania on a mission trip to Alpine in the 1920s.

Dr. Claire Adams was photographed on horseback in the back yard of the Presbyterian manse at Alpine.

Harriet Faust was among those who traveled from Pennsylvania on a mission trip to Alpine in the 1920s.

Stories from the Past - A 1920s mission trip  to Alpine

The following is an historic and very interesting memoir written by Harriet Olive Faust telling of a mission trip she and others from Pennsylvania made to the Alpine and Ivyton communities in the 1920s. That mission trip came about through the request of Dr. Clair S. Adams who began his ministry of the church at Alpine on September 15, 1926. The following is taken from Harriet’s manuscript in which she recorded the events of their trip to Tennessee:

“One stormy winter evening, a stranger came to our town. He asked permission to speak in the church. The pastor of the church was sorry, for there was an important dinner that night, and after that, a concert in the auditorium. “I can manage to let you have my study and somehow sandwich you in between the dinner and the concert,” offered the pastor, “and that is the best that I can do.”

Only a handful of people gathered that night to hear this preacher from the southern mountains speak of his work among the poor white section of our country. No one appeared more than politely interested, and Dr. Adams left town that night feeling that the talk had been one of the most unsuccessful he had ever attempted. But back in his southern home, at the end of his journey, he found a letter awaiting him. Someone in that tiny northern audience wrote to offer her services for the summer daily Vacation Bible schools. More letters were exchanged, and one day, Dr. Adams noted with surprised delight that when June arrived, he would have a full crew, all from Pennsylvania.

“When we, the crew, reached the mountains of northern Tennessee, we found Dr. Adams anxiously waiting to tell us of his plans. We were to go out by twos and threes, he said. We would live in the homes of the people in our classes. We would gather from time to time at the manse at the foot of the mountains to talk over our problems, if any. After a tasty supper on the back lawn at the manse, we sat until the sun went down and heard our instructions for the following week. “Tomorrow afternoon,” said Dr. Adams, as we parted for the night, “I’m going to take some of you with me up to Ivy Mountain (Ivyton) for their annual decoration service.”

With us that afternoon went the little folding organ, a gift from the Presbyterian church in Brockway, PA. The day was hot and the way was long. We walked four miles, crossed the river via a swinging bridge, and walked or climbed four miles more. Time passed swiftly. “There is no need to rush,” comforted Dr. Adams as we rested for the twentieth time and for the twentieth time wondered if we would last. “My people and I have a very convenient custom. If I get there first, I wait for them. If they get there first, they wait for me.”

They waited for us that day, for when we finally arrived, dozens of the mountain people were gathered in the little burying ground where the service was to be held. We opened the little folding organ while the children gazed on it in wonder. There were children there who had never until that minute heard any kind of musical instrument, a mountain mother told us the next day. When the service was over, Dr. Adams introduced some of the people to us.

We stood in the cemetery a long time wondering at the profusion of paper flowers with which each lowly grave was decorated. Wildflowers grow in abundance among the hills, but not a wild flower was used in the mounds which underneath the paper flowers were piled high with wooden rails and stones. “That’s to keep the cattle from stepping on the graves as most of the cemeteries have no fences,” someone explained. In some cemeteries, one may find glass fruit jars inside of which, placed so that the passer-by may read it, is a letter to the dead written by that person’s grieving relatives and friends.

“Just before we left, we met Aunt Nan and Uncle Drew who were anxious to be assured that one of the teachers would live at their house. Lonely older folk, they were, giving of all that they had. Their home became a welcome resting place to all of us who had the privilege of helping in the school at Ivy Mountain.

Those days on Ivy Mountain were long to be remembered by the three of us who were up at the crack of dawn the next morning. The Bible School was held in the school building, a poor, pathetic looking building with two doors, one for the boys and one for the girls, and scarcely any glass in the window panes. The blackboard was a painted board. There was one piece of chalk which one of the children dug out from under the platform for us. But we had the folding organ, a set of song books, a few other books, and a good supply of crayons and drawing paper. And we had a room full of people, old and young, from the babe in arms to the seventy year old man and woman. In some cases, whole families came together.

For two full weeks, we held the school. One night, we had a special service with plenty of music. “I could just shut my eyes,” said Aunt Nan, “and imagine myself in one of your big city churches up North.”

Time seemed to be a forgotten element in the mountains. At first, we tried to keep a time schedule, but it never worked. Our boys and girls, men and women, arrived any time from seven in the morning until twelve noon. Money is also a seemingly non-essential. In many mountain church services, an offering is not even suggested for there would be no money for it.

As part of our closing exercises before we left, we held a picnic and a marshmallow roast. Much to our surprise, many of the people had never heard of marshmallows, much less seen one. Our afternoons were spent visiting in the home of our people who were hospitable almost to a fault, for we had more invitations than we could possibly accept. Houses were poorly built and small. Often the entire family slept in one room. This room was also used as the living room. The living room furniture was just beds and more beds and a few chairs scattered about. But usually the houses and the clothing of the people were clean as they could make them.

Their food was the hardest thing to learn to like for they fry practically everything, even nice fresh green peas. They bake cornbread in huge slabs. When the bread is served to you at the table, you break a piece from the slab and pass it on to the next person. Breakfast is the big meal of the day.

A little dispensary opened the summer we were at Alpine was the only institute resembling a hospital in five counties. Not all the communities were as friendly as was Ivy Mountain we were to find to our sorrow. At the end of five weeks, we came away feeling that we had been in a new country ... the forgotten land of our nation.”

Dr. Claire S. Adams retired from his ministry in Alpine in 1936 and was replaced by Bernard M. Taylor. The history of Christ Church, Presbyterian at Alpine includes the loss of the building by fire not once but a second time as well. The first fire came about in 1921 as a result of a cleaning up of nearby school grounds when sparks from a brush fire caught the roof of the church building on fire resulting in a total loss of the building.

In 1936, the building had once again been completed. On the night before the building was to be dedicated, what is believed to have been a spontaneous combustion fire started from oily rags that had been used to oil the floors, and for a second time, the building was a total loss. But it did not take long for another building process to get started, and in October of 1939, worship services were held in the building for the very first time. On one side of the building, a beautiful stone pulpit built by Walter Norris was dedicated to the memory of Rev. Clair S. Adams. The memoir written by Harriet Olive Faust was presented by County Historian Ronald Dishman to Christ Church, Presbyterian at Alpine to remain as a permanent record in the library there.