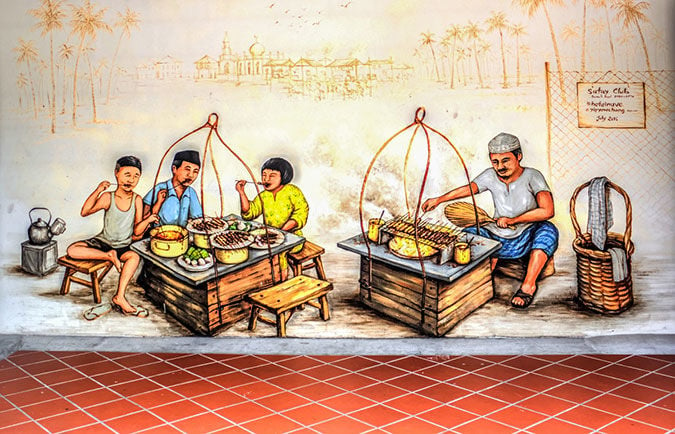 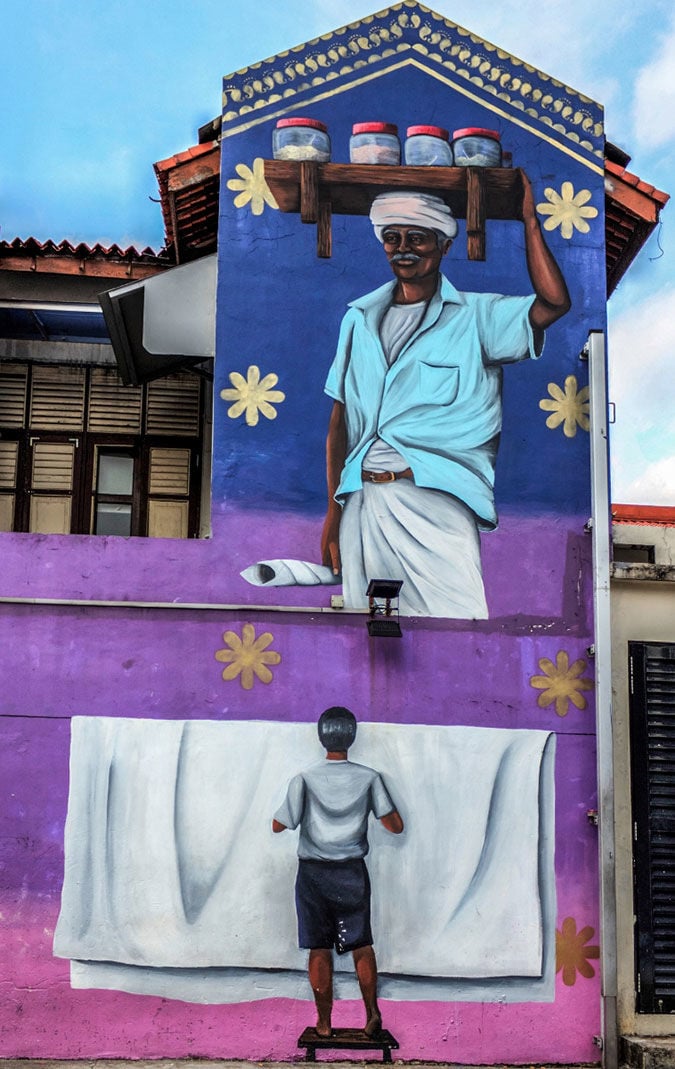 In Singapore, street arts once criminalized as public vandalism were decriminalized as heritage building in the mid-2000s when the city-state was aspired to become a renaissance city. Street artists once marginalized are mainstreamed because their artistic expressions embody the multicultural heritage of 5.8 million people in an island country the size of Clay County Tennessee. Captivated by two heritage murals illustrating the livelihoods of immigrants in detail in Everton Park, the “Barber” and “Provision Shop”, I began heritage mural hunting in three ethnic enclaves.

In Little India, I found the garland maker, milkman, parrot astrologer, snack man, and laundryman in a group of murals titled “Traditional Trades” by a mural artist with the pseudonym Psyfool. “The Letter Writer” by Yew Chong Yip in Chinatown was especially endearing to me because I was reminded of my illiterate mother who had to frequent a letter reader/writer until my older sister and I were able to read and write in Mandarin Chinese. In Little Arab, or the Malay-Muslim Quarter, I found the basket weaver and satay vendor also by Yip in a group of murals titled “The Glam Village”. In order to capture these murals as panoramas, I mounted my camera on a tripod taking anywhere from 5 to 10 photos/shots for each mural horizontally from left to right or vertically from top to bottom while overlapping each photo by one third. Because of a constant trickle of pedestrians and vehicles, I spent on average 30 minutes on each mural. “The Barber”, for example, was photographed horizontally from left to right in 10 shots in manual mode with an exposure balance as follows, aperture f/11, shutter speed 1/100 second and ISO 200. The photos/shots were stitched into a panorama through Hugin, a free photo stitching software, after they were uploaded to my desktop.

Although criticized for evoking collective consciousness through a nationalized heritage, heritage murals tells the story of immigrant communities in Singapore. The economic success of the 5th richest country in the world has its root in the tenacity of Chinese and Indian artisans and laborers brought in by the British colonial rule in the 19th century to transform a sleepy fishing village into a bustling trading port. Try street arts hunting if you are in Singapore. Hop on the low-fare, air-conditioned subway train system and tour around the island early in the morning or late in the afternoon to avoid the sizzling tropical sun. Keep your eyes open. Some murals are hidden in plain sight on broad thoroughfares rather than tucked away in narrow alleys.

Enjoy a sense of camaraderie at our monthly meeting which takes place on the second Monday of each month from 7:00 to 9:00pm at the First Presbyterian Church. Meet a community of photographers who are dedicated to further their photography skills through peer review contests, exhibitions, guest speaker lectures and workshops.